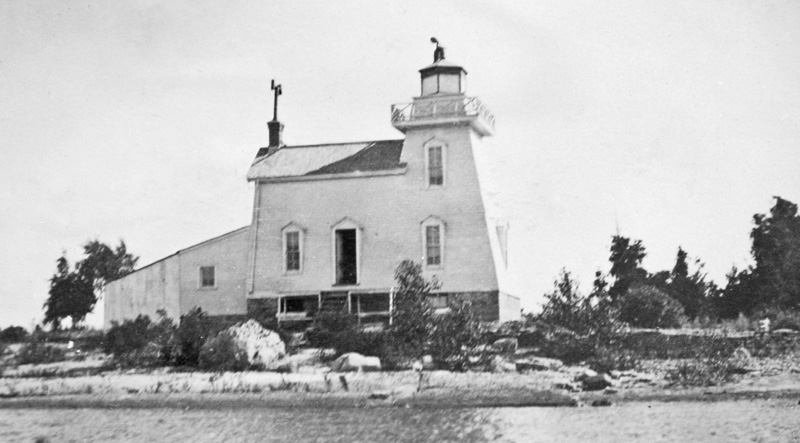 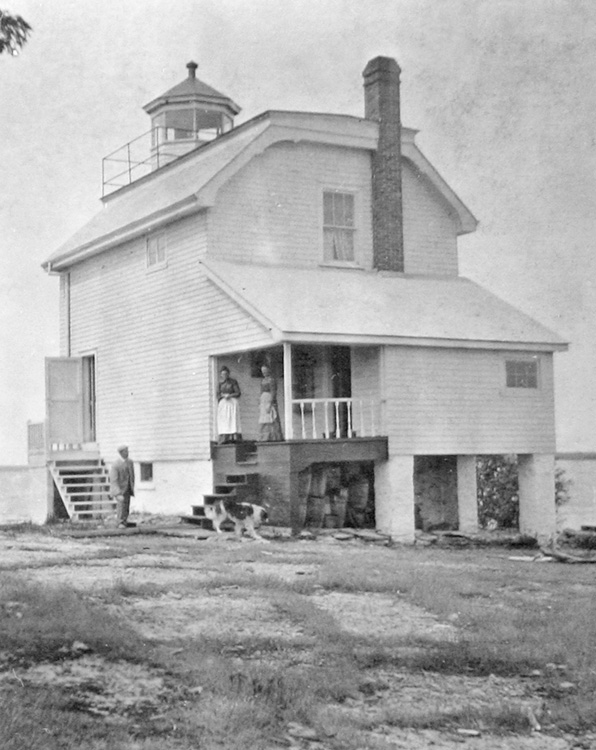 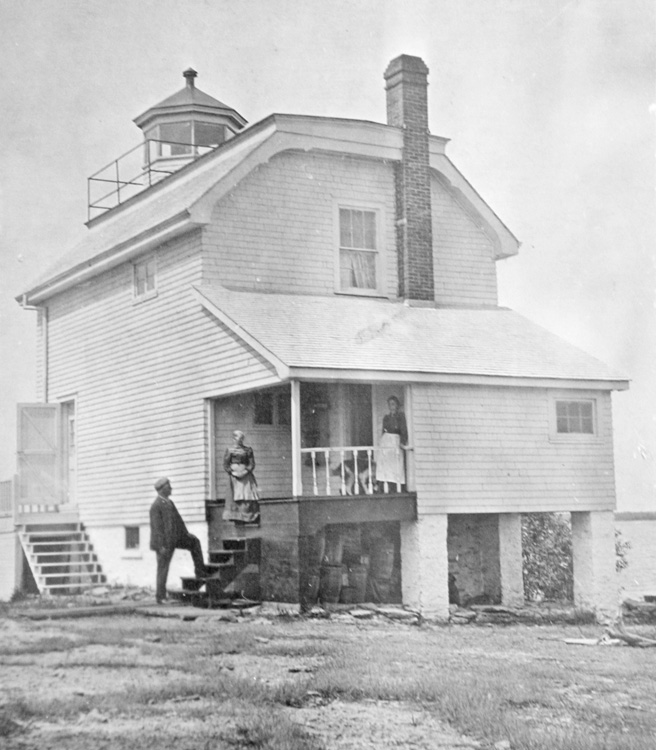 Charles Mickler of Collingwood built the first Narrow Island Lighthouse for $1,425. The following description of the structure appeared in a Notice to Mariners published in 1890:

A lighthouse, established by the Government of Canada on the west end of Narrow Island, in the channel north of Manitoulin Island, in the District of Algoma, and Province of Ontario, was put in operation on the 21st October last.

The light will be fixed white, elevated 34 feet above the water, and should be visible a distance of 11 miles from all points of approach. The illuminating apparatus is dioptric, of small size.

The lighthouse is a square wooden building and, with kitchen attached, is painted white. The tower is surmounted by an iron lantern painted red. Its height from the ground to the vane on the lantern is 35 feet.

William Peters was hired as the first keeper of the lighthouse, but seven years later, the Department of Marine decided to cancel his appointment as it had been determined that he did not give personal attention to his duties as light keeper but attended to farming at a considerable distance from the station.

A.B. Boyter, who was known as Tom, replaced Peters as keeper and served until 1920. During his tenure, fire destroyed Narrow Island Lighthouse on March 30, 1902. A description of the fire appeared a few days later in the Manitoulin Expositor:

On Sunday morning between 8 and 9 oclock the lighthouse kept by Mr. Thomas Boyter at Narrow Island, about two miles west of here, was burned. The fire started from the chimney, which was of single brick construction, and before noticed, the sheeting of the roof was in flames. The fire soon gained such headway that Mr. Boyter and his family had not time to save anything upstairs except a little bedding. They however, got everything from the lower part of the house. They lost about $130 worth of clothing, furniture and bedding which was upstairs and $23 in cash, which was in a bureau drawer. This is a heavy loss to Mr. Boyter and it leaves him without a home. He and his family are now staying with his sons here.

On April 27, 1902, a temporary light, in the form of a lantern hoisted on a pole, started to be shown from the site of the former lighthouse. The operation of the hand foghorn resumed at the same time.

A new lighthouse, built on the site of the first one, was placed in operation at the opening of navigation in 1903, and the temporary light was discontinued. This second lighthouse consisted of a two-storey, rectangular, wooden dwelling topped by an octagonal wooden lantern on the west end of its roof. A seventh-order dioptric lens was used to produce a fixed white light at a height of thirty-six feet above the water. A red sector was inserted in the light to mark Foster Bank and the shoals near it. J. Candlish Kennedy of Owen Sound built the lighthouse at a contract price of $2,576.40.

Carl W. Dieter, who was wounded while fighting in World War I, was placed in charge of the light on Narrow Island in 1921, and he served until the light was automated in 1958. At that time, the signature of the light was changed from fixed to flashing, the red sector was removed, and the hand foghorn discontinued.

In 1979, the 1903 lighthouse was destroyed and a skeletal tower with white, slatwork daymarks on three sides was erected on the island. In 2021, a similar structure was displaying a flashing white light with a period of four seconds on Narrow Island.

For a larger map of Narrow Island Lighthouse, click the lighthouse in the above map.