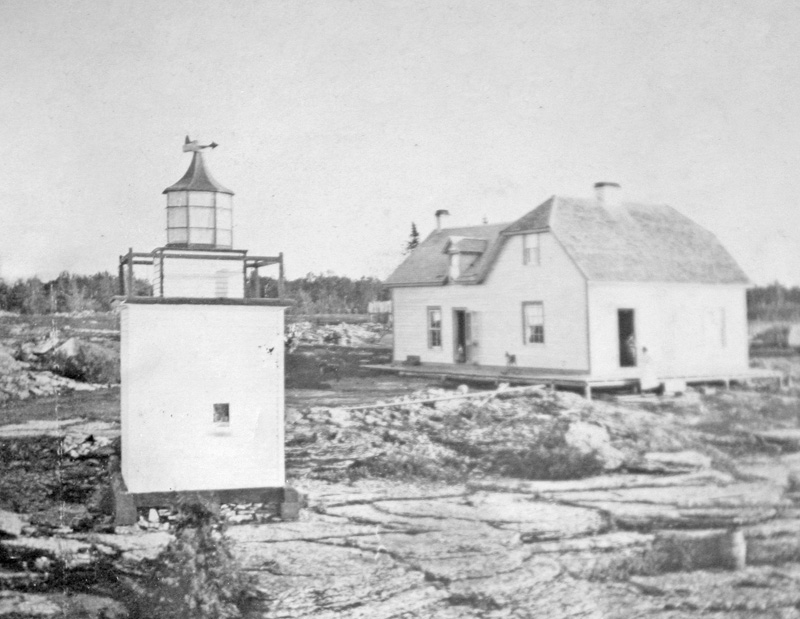 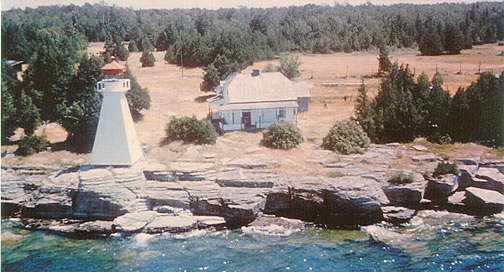 The North Channel has a length of roughly 160 nautical miles and connects Georgian Bay on the east to St. Marys River on the west. The channel is bordered by the mainland on the north, and on the south by the islands of Manitoulin, Cockburn, Drummond, and St. Joseph, and is connected to Lake Huron by Mississagi Strait between Manitoulin Island and Cockburn Island and False Detour Channel between Cockburn Island and Drummond Island. The North Channel is recognized as one of the best freshwater cruising grounds in the world.

In its report for 1852  1853, the Commissioners of Public Works for the Province of Canada, called for the construction of additional lighthouses:

Captain MacGregor, who had been in command of a steamboat on Lake Huron for several years, recommended that the government construct nine lighthouses on Lake Huron, including one on Badgeley Island and one each on Clapperton island and St. Joseph Island to mark the North Channel.

In 1855, a contract was awarded to John Brown, a Scottish builder from Thorold, to erect eleven lighthouses on Lake Huron. These eleven included the nine lighthouses MacGregor had proposed, save the one on Kettle Point, plus lighthouses for Point Clark, Nottawasaga Island, and Mississagi Strait. Between 1856 and 1859, Brown erected the six lighthouses on Lake Huron and Georgian Bay that are now known as the Imperial Towers (Point Clark, Chantry Island, Cove Island, Nottawasaga Island, Griffith Island, and Christian Island), but due to the high cost of these, construction of the lights along the North Channel was postponed.

A lighthouse, in the form of a square, wooden tower was finally erected on the north point of Clapperton Island in 1866, and Charles Patton was hired as the first keeper. The iron lantern room atop the tower had a diameter of four-and-a-half feet and sheltered three lamps set in reflectors that produced a fixed white light. In 1913, the illuminating apparatus was improved through the installation of a sixth-order Fresnel lens.

Clapperton Island is situated north of Kagawaong and west of Little Current, both of which are communities on Manitoulin Island.

Members of the Baker family were in charge of Clapperton Island Lighthouse for several decades. Benjamin B. Baker was appointed keeper in 1875 after Charles Patton resigned. Benjamin served until 1894, when he drowned while going between Clapperton Island and Manitoulin Island. His boat washed ashore, but his body was never found. Henry F. Baker took charge of the light after his father drowned and served until around 1940, when his son William became the keeper.

Henry Baker lived on Clapperton Island with his son William until 1946. In September of that year, Henry was helping his son service a set of range lights on the island, when the light fell and broke his shoulder and seven ribs. Henry had ridded on horseback to the range light that day and after servicing the light, hoisted it back to the top of the tower. When the light reached the top, the rope broke, and the light came crashing back down and struck him. Henry managed to get on his horse and ride one-and-a-half miles back to the keepers dwelling on Clapperton Island. The next day, he was taken to St. Josephs Hospital on Manitoulin Island, where he died three days later. The range light Henry was servicing must have been Cartwright Point Range, located on Clapperton Island east of the lighthouse.

In September 1950, Keeper William Baker suffered a ruptured appendix. He was apparently alone on the island at the time, and three days after the incident he collapsed while trying to reach the lighthouse to replenish the oil in the lamps. Harold Hutchings found the keeper on the path to the lighthouse when he visited the island to return some things he had borrowed from William. Hutchings and Bert Bailey carried the sick keeper to their boat and headed to the dock at Kagawong, from where Baker was rushed to a hospital. Norman Lloyd, Keeper Bakers nephew, went to the island to care for the light until he could be relieved.

In 1957, the height of the light exhibited at Clapperton Island changed from thirty feet to forty feet, so it is likely at this point that a new wooden tower with tapered sides instead of vertical sides was built. The annual Light List noted that the station on Clapperton Island had resident personnel and that a hand-operated foghorn was used on the island up through 1966, but the 1968 Light List does not have these notes, meaning the station was likely automated around 1967.

In 1982, a square, skeletal tower with slatwork daymarks on three sides was placed on Clapperton Island to display a white flash every four seconds. A tower of a similar description was still in use in 2021.

For a larger map of Clapperton Island Lighthouse, click the lighthouse in the above map.