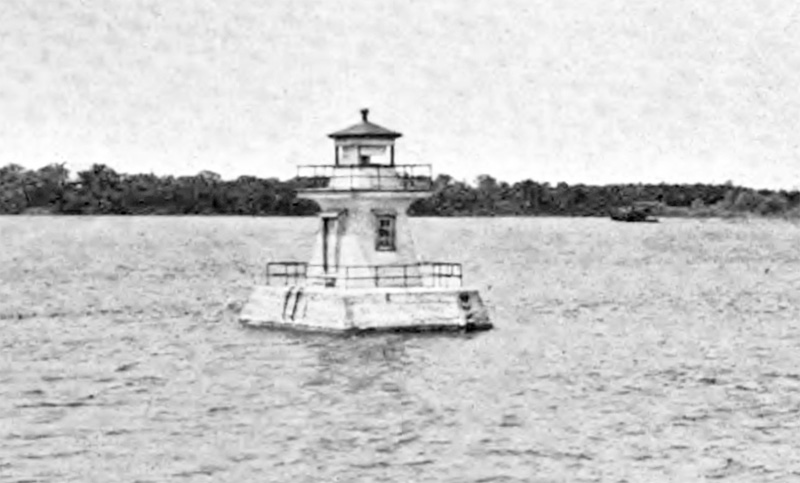 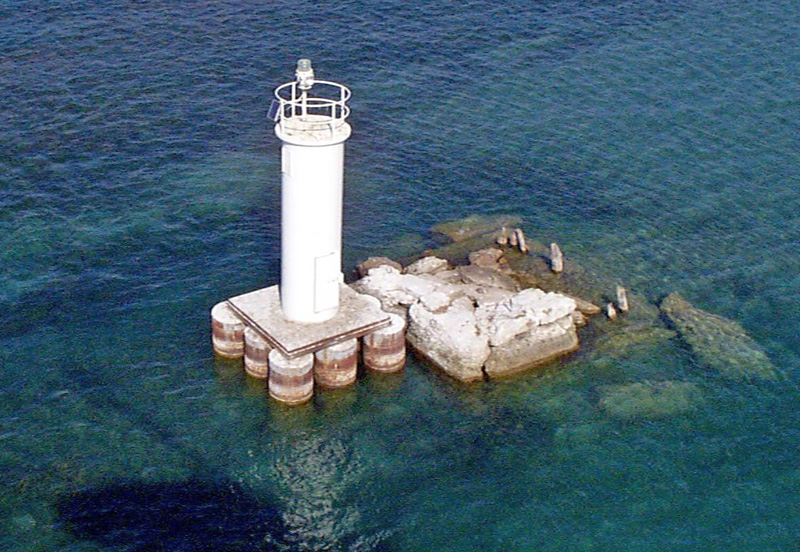 Stag Island is a sizeable Canadian island situated in St. Clair River between Corunna, Ontario and Marysville, Michigan. In the early 1900s, Stag Island was a resort destination that boasted a 100-room hotel, dining hall, and several cottages. Vacationers on the island amused themselves by playing croquet or tennis or by bathing at the beach. The resort fell on hard times after World War I, and today, the island is home to over 100 private vacation cottages owned by both Canadian and American citizens.

In July 1900, a pole light was established off the south end of Stag Island to mark the shoal that extended from the island. This light consisted of a lens lantern hoisted up a mast that had a small shed at its base. The mast was seven feet tall and stood atop a platform that was built on a pile foundation. The piles were driven in eight feet of water just north of the location that the U.S. Lighthouse Board had previously marked by a middle ground spar buoy. J.N. Gibb of Wallaceburg drove the piles and built the mast light at a contract price of $92.75.

In the spring of 1901, ice carried away the mast light. A temporary light was shown from a lantern suspended five feet above the water on poles that were driven into the shoal fifty feet north of the position of the mast. This light served until July 12, 1901, when another mast light, similar to the original, was placed in service. To protect this new light, a pile-work icebreaker was built around the upstream end of the platform. J.N. Gibb was once again called on for the work, which he accomplished for $275.

In 1908, a formal lighthouse was built on the shoal in place of the mast light. The Annual Report of the Department of Marine for that year had the following description of the lighthouse:

A lighthouse tower was erected on the southern end of Stag island shoal, replacing the pole light formerly exhibited. It is a wooden building, square in plan, with sloping sides, surmounted by a square wooden lantern, and is 22 feet high from base to top of ventilator on lantern. The tower stands upon a reinforced concrete pier, square in plan. with battered sides. The work was done by day's labour, at a cost of $3,403.06.

The new light, which was produced by a seventh-order change lens and a duplex lamp, was placed in operation on October 17, 1908.

Ross Taylor was the first keeper of Stag Island Shoal Light. He served until 1903, when Thomas M. Cowan took over. Keeper Cowan served until 1919 and was followed by D.J. Symes and G. Hagan.

In 1929, an occulting, white acetylene light was placed in the lantern room of the lighthouse, and the light became unwatched.

For a larger map of Stag Island Shoal Lighthouse, click the lighthouse in the above map.

The modern light can be seen from the shore of the river, but it is hard to find a public location to do so.