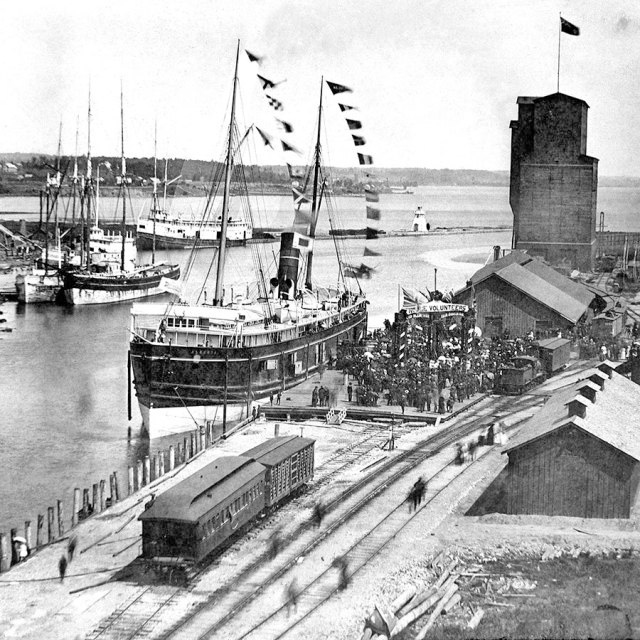 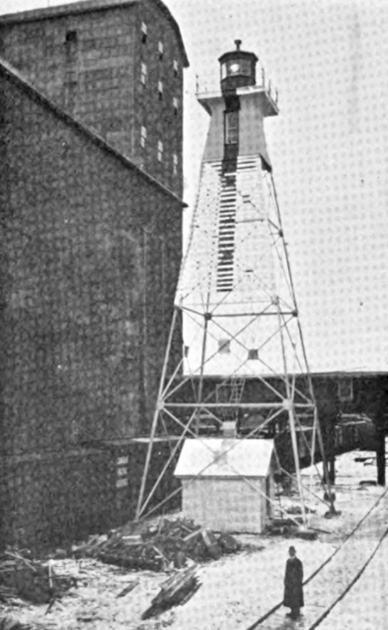 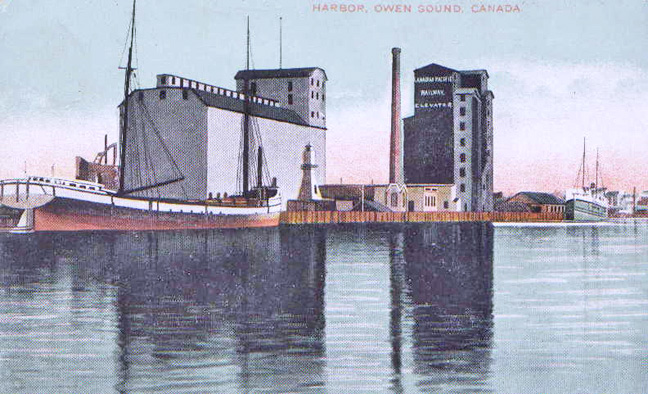 The Town of Owen Sound is situated at the end of a natural inlet on the Georgian Bay side of the Bruce Peninsula. In 1878, the Canadian government gave $100 to the Corporation of Owen Sound to help with the maintenance of two harbour lights that the corporation had established some years earlier for the benefit of vessels entering the harbour. In 1880, the Canadian government assumed responsibility for the range lights, and George S. Miller was appointed keeper of the lights at an annual salary of $100. Tenders were invited in 1882 to construct a set of new range light towers to replace those erected by the municipality that had become unserviceable. Fred Brown was awarded a $475 to build the lighthouses, and the following description of the structures appeared in the Annual Report of the Department of Marine for 1883:

Two lighthouses at the entrance to Owen Sound Harbor, at the mouth of the Sydenham River, Georgian Bay. These lighthouses replace the old range lights formerly maintained by the Corporation of Owen Sound and are erected near the site of the old lights. The front light, which is a red dioptric light, elevated 22 feet high and visible for 6 miles, is shown from a square white wooden tower, 21 feet high, standing on a small block built on the starboard side of the dredged channel. The back light is white dioptric in character and is elevated 39 feet above water mark, and is also shown from a white wooden tower, 34 feet high, standing upon the western pier work embankment at the mouth of the river. This light is 1,520 feet distant from the front light and should be seen at a distance of 11 miles. The two lights in range lead to the dredged channel at the mouth of the river.

In 1883, the Canadian Pacific Railway began its steamship service on the Great Lakes from Owen Sound. Trains would leave Toronto at 10:45 a.m. and arrive at Owen Sound at 3:05 p.m. to connect with the steamers that would leave Owen Sound three days a week. In 1908, the frequency of the steamers was increased to five days a week. The Department of Marine noted in 1895 that due to harbour improvements at Owen Sound, which included the widening and deepening of the approach, it was necessary to move the range lights leading into the mouth of the river. A description of the new lights was printed in the departments report for that year:

The back range tower was moved from the embankment on the west side of the entrance, and now serves as the front tower of the new range. It stands on a pile foundation, at the outermost angle of the sheet piling, on the east side of the mouth of Sydenham River, its middle 18 feet from the face of the pilework. It is a square wooden building, surmounted by a square iron lantern, and is 34 feet high from base to vane. It is painted white with a vertical red stripe on the north side, or side facing the channel.

The light is a fixed red light elevated 39 feet above the level of the water. It should be visible seven miles in, and over a small arc on each side of, the line of range. The illuminating apparatus is catoptric.

The back range light tower, which is new throughout, is located on a pile foundation 915 feet S. by W. 3/4 W. from the front tower, or 225 feet north-eastwardly from the north-east corner of the Canadian Pacific Railway elevator.

It is a square wooden building, surmounted by a square wooden lantern, is 46 feet in height from its base to the vane on the lantern, and is painted white with a vertical red stripe on the north side, facing the line of range.

The light is a fixed red light elevated 46 feet above the level of the water, and should be visible eight miles in, and over a small arc on each side of, the line of range. The illuminating apparatus is catoptric.

The front tower of the old range, on a crib outside the rivers mouth, is still standing, and marks a point where vessels entering should have the alignment of the new range, and head for the river midway between the breakwater piers. This is no longer lighted, and the pier will probably be removed to suit extension of dredging. The axis of the new range of lights is 10° further to the westward than the old one, and leads up the west shore of the sound, clear of all obstructions, and is consequently a great improvement on the old arrangement. The change was made on the opening of navigation this year. The work of removal and building was done under contract by Mr. John Riely, of Owen Sound, for $498.

The cribwork pier, on which the front range light had originally stood on the west side of the dredged channel, was removed during the summer of 1898 when the entrance channel was widened.

In 1909, two new range towers, both steel, skeletal towers, square in plan, with sloping sides and surmounted by enclosed wooden watchrooms and octagonal iron lantern rooms, were erected to mark the harbour at Owen Sound. The front tower stood fifty feet tall and had been used as the rear tower at Point Au Baril since 1903, but a taller tower was needed there so the range could be seen at a greater distance. The Goold, Shapley, and Muir Company of Brantford, Ontario supplied the eighty-two-foot-tall new tower to display the rear light at Owen Sound for $668.50.

On December 11, 1911, fire damaged the rear range lighthouse at Owen Sound and destroyed the two Canadian Pacific Railroad elevators between which the tower stood. The tower was rebuilt and placed in operation for the following navigation season. The Canadian Pacific Railroad decided to not rebuild its grain elevator at Owen Sound but rather moved is steamship headquarters to Port McNicoll.

For a larger map of Owen Sound Lighthouse, click the lighthouse in the above map.

The modern lights can be seen at the harbour at Owen Sound.