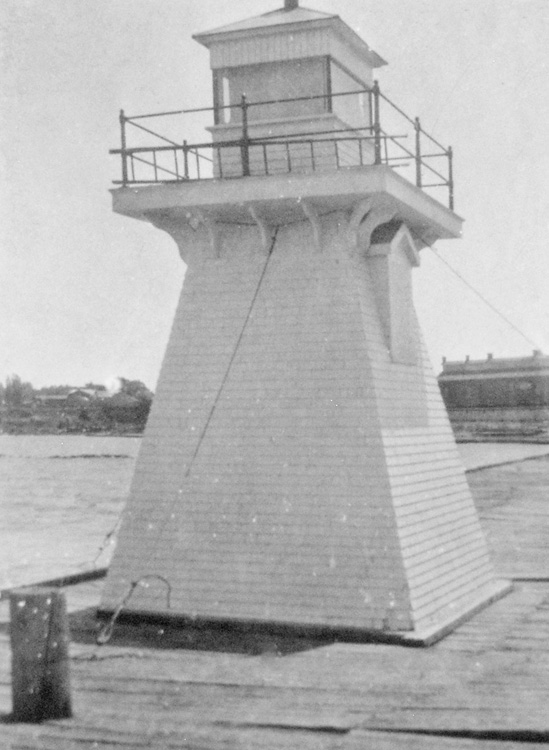 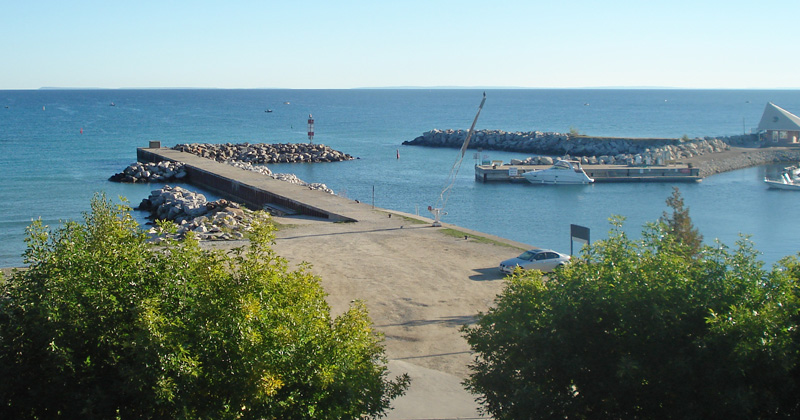 Thornbury is situated on the southern shore of Georgian Bay, between Meaford and Collingwood. The town was first incorporated in 1831, and then divided from Collingwood Township in 1887. Thornbury was a shipping and processing centre for local agricultural products, especially apples, through its harbour on the bay. A small fishing fleet also operated from the harbour. In 2001, Thornbury merged with Collingwood Township to form The Blue Mountains municipality.

In 1886, Messrs. Carroll & Pedwell received a $150 contract to built a mast, with a shed at its base, to display a beacon light on the outer end of the pier at Thornbury. The light was placed in operation on May 18, 1887. A lenticular lantern was hoisted top a twenty-five-foot tall mast to exhibit a fixed red light that could be seen for roughly eleven kilometres.

In 1901, the mast light, which was located on the west breakwater pier, was relocated to the east side of the pier so it could align with a new light, that was established in July of that year to form a pair of range lights at Thornbury. Edward Rorke was paid $275 to construct a twenty-nine-foot-tall mast with a shed at its base on the government reserve on the west side of Beaver River to display the rear light. The two masts lights were separated by 376 feet and were fixed white lights that mariners could align to follow the dredged channel to the entrance between the breakwater piers. On June 1, 1902, the back light was changed from a white light to a red light so it could be distinguished from the town lights. A seventh-order lens replaced the pressed lens lantern used on the rear mast at this time to increase the strength of the light.

On May 21, 1911, fire destroyed the mast light on the outer end of the western pier. In its place, a twenty-seven-foot-tall, square, wooden tower was placed on the outer end of the west pier at Thornbury to exhibit the front light of the range. J.J. Shaver oversaw this work, which cost $691. A diamond-shaped slatwork target, painted white, was affixed to the top of the mast used to display the rear light of the range at this time to make it more conspicuous as a daymark.

A storm on December 5, 1916 damaged the outer portion of the west pier, and the lighthouse was moved back seventy-two feet onto the undamaged portion of the pier until repairs to the pier could be made. In 1930, the colour of the front range was changed from white to red.

Robert Lowe served as the keeper at Thornbury from 1887 through at least 1923.

The square, wooden tower was still listed as being on the western pier in the 1936 Light List, but the 1937 edition shows that a pole light replaced the tower sometime in 1936. In 2021, a cylindrical mast, with a red-and-white rectangular daymark, was being used to display a sector light from the western breakwater at Thornbury. The sector light shows a flashing white light over an arc of 202° to 206°, but the light is red from 164° to 202° and green from 206° to 240°.

For a larger map of Thornbury Lighthouse, click the lighthouse in the above map.

The modern light can be see on the western breakwater at Thornbury.