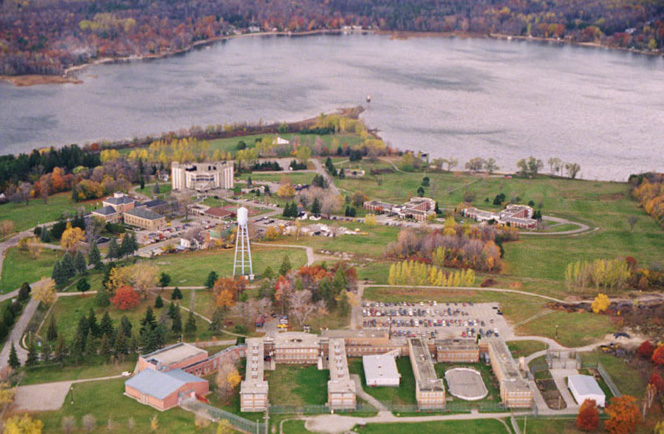 Penetanguishene Reformatory, Upper Canadas first juvenile detention centre, was opened in 1859 on the site of a former naval base on the southern side of the entrance to Penetanguishene Harbour. The boys were housed in barracks formerly occupied by military personnel until these barracks burned to the ground. A new sandstone building was then constructed for the reformatory, and today it is part of the administration building for Waypoint Centre for Mental Health Care. The reformatory closed its doors in 1903, and in 1904, the Asylum for the Insane opened on the grounds of the reformatory.

The Annual Report of the Department of Marine for 1876 provides the following information on a lighthouse built on the reformatorys pier that year:

A lighthouse has also, during the past season, been erected upon the pier at the Provincial Reformatory, Penetanguishene, and put in operation on the 30th September last. The light is fixed white and of the catoptric order, is elevated 20 feet above high water, and should be seen eight miles in clear weather. The tower is a square wooden building, 18 feet high from top of pier to vane, and is painted white. Mr. Peter Kilraine was appointed keeper of this light, by Order in Council of the 7th October, at a salary of $150 per annum.

The total cost for the lighthouse came to $365.88: R. Whiteacre was paid $250 for building the tower, and E. Chanteloup provided the lantern room and glass for $115.88. An iron lantern room with a diameter of four feet surmounted the square tower, and inside it, a mammoth, flat-wick lamp and sixteen-inch reflector were used to produce a fixed white light that could be seen up to six miles.

Keeper Kilraine retired in 1882, and William Augustus Thompson was placed in charge of both the light on the pier, known as the Penetanguishine Harbour Light, and the new lighthouse on nearby Whisky Island. Mariners were told that keeping the light on Whisky Island in line with the one on the end of the Reformatory Pier lead through the cut into Penetanguishene Harbour.

In 1907, considerable repairs were made to the lighthouse and pier at the reformatory dock. The portion of the pier below the water line was removed and replaced with a structure built using twelve-inch square hemlock timber. The top of the pier was finished with twelve-inch-square white pine. The lighthouse received new sills, floors, and joists. H. J. Alward directed this work which cost $1,065.

In 1946, a pole light replaced the wooden tower on the reformatory pier, and the characteristic of the light was changed from fixed white to flashing white. A diamond daymark made the pole more conspicuous during the day. In 2021, a cylindrical tower, with red and white horizontal stripes and a green, square daymark, was displaying a flashing green light on the outer end of the pier. The Canadian Coast Guard now lists the light as Asylum Point.

Located just off the point that marks the southern side of the entrance to Penatanguishene Harbour.
Latitude: 44.809555, Longitude: -79.932555

For a larger map of Asylum Point (Penetanguishene Harbour) Lighthouse, click the lighthouse in the above map.

The modern light can be seen from the grounds of Waypoint Centre for Mental Health Care.