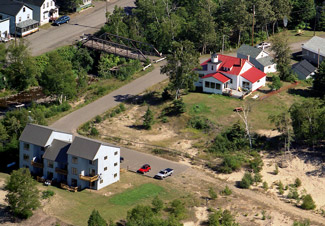 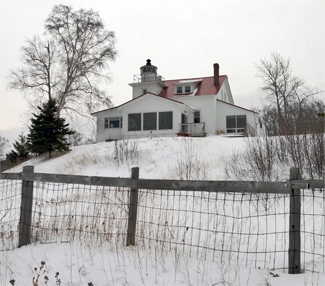 Eagle River was named because of the numerous eagles that voyagers observed nesting along the river, but it was copper that led to the development of the community. Douglas Houghton, Michigans first state geologist, led a small expedition along the southern shore of Lake Superior during the summer of 1840 and discovered the rich mineral deposits that sparked development of Keweenaw Peninsula. In 1845, Pittsburgh and Boston Mining Company opened the Cliff Mine near Eagle River that became the first great copper mine in the Western Hemisphere. Even though Eagle River lacked a fine natural harbor like those at Copper Harbor and Eagle Harbor, docks and warehouses were built along the river for shipping the copper extracted from the nearby Cliff Mine. Between 1840 and 1870, investors poured $110,000 into the mine and reaped more than $2,000,000 in profits. The success of the mine spawned other businesses like the Frank Knivel Brewery and the Eagle River Fuse Company, which could manufacture 25,000 feet of fuse each day for use in the local mines.

In 1853, Eagle River became the county seat of Houghton County, and then the seat of Keweenaw County, when it was created from Houghton County in 1861. On September 28, 1850, Congress appropriated $4,000 for a lighthouse at or near the mouth of Eagle River, but it wasnt until January 27, 1853 that the Michigan Legislature passed an act ceding jurisdiction over a tract of land for the lighthouse on the western side of the mouth of Eagle River.

A contract for construction of lighthouses at Eagle River, Point Betsie, Portage River, and Pointe aux Barques was awarded to Alanson Sweet, Luzerne Ransom, and Morgan E. Shinn on July 17, 1854. Eagle River Lighthouse was completed in 1855, but the superintending engineer rejected the work as not being built in conformity to the terms of the contract. A special agent was dispatched to investigate the matter at the opening of navigation in 1858, and it appears the controversy was settled as the lighthouse was completed and lighted later that year.

A sixth-order Fresnel lens was installed inside the iron, decagonal lantern that surmounted the nineteen-foot-tall stone tower to produce a fixed white light that served as a guide to the mouth of Eagle River. The tower was five feet, two inches wide and was attached to the corner of a one-and-a-half-story stone keepers dwelling that was roughly twenty-nine feet square.

The first keeper of Eagle River Lighthouse was John Griswold, who transferred to the new station from Eagle Harbor Lighthouse, where he had served as keeper for ten years. When Keeper Griswold died in 1861 at the age of fifty-one, Julia, his wife, took charge of the light and served for four years.

Henry F. Feiser was appointed third keeper of Eagle River Lighthouse in August 1865, after his service in the Civil War. Born in Germany in 1838, Feiser immigrated to the United States in 1852 and was employed in a glass house until he moved to Eagle River in 1855 and began working as an engineer at the Cliff Mine. On August 16, 1862, he joined Company C of the Twenty-Seventh Michigan Volunteers as a sergeant and received a gunshot wound in his elbow in July 1864 that resulted in the amputation of his arm.

While Keeper Feiser was serving at Eagle River, the following report on the lighthouse appeared in the Annual Report of the Lighthouse Board for 1868:

At this station the buildings are situated on a sand hill, and the tower forms one corner of the dwelling. Owing to the character of the foundation the walls have cracked, and the crack has enlarged materially within the last year, showing that the destructive influences are still at work. The inspector reports that already there is danger that the corner of the dwelling supporting the tower will fall. Either very extensive repairs or a new structure are required, and believing that the latter would prove to be the most economical, an estimate of the cost is submitted.

Congress allocated $14,000 for building a new lighthouse at Eagle River on March 3, 1869, but when this money reverted to the treasury, the same amount had to be provided again on March 3, 1871. The second Eagle River Lighthouse took the form of a square tower built into the northeast corner of one-and-a-half-story brick keepers dwelling. The sixth-order lens was transferred to the new lighthouse, where it stood twenty-four feet above the ground and sixty-one feet above Lake Superior.

Keeper Feiser passed away in 1889, and Thomas J. Bennetts was appointed in his stead. Keeper Bennetts service at Eagle River overlapped with that of his brother Noah, who was in charge of Portage Lake Ship Canal Lighthouse.

Eagle River was starting to decline in importance about the time its second lighthouse was built. The owners of the Cliff Mine sold it in 1870 for $100,000, after the mine had reached a depth of 1,000 feet and extracting the copper was becoming more difficult. Though the mine would operate well into the 1900s, Eagle River was no longer the important port it once was.

Vessels bound east from the head of Lake Superior first make the land and commence to turn in rounding Keweenaw Point at the Sand Hills, 12 miles west of Eagle River. This point is halfway between Eagle Harbor and Ontonagon, and is 7 miles southwest of Eagle River. There is now a light at Eagle River, but it has outlived its usefulness. The local traffic of the place has stopped. It has no commerce and no harbor. There is no longer reason for continuing the light there, except as a coast light, and it is not sufficiently powerful to serve that purpose. It is proposed, therefore, to move the light from Eagle River, where it is of no use, to Sand Hills, where it would be of great service.

The Lighthouse Board repeated its request for funds for a new lighthouse at Sand Hills for a decade, and then in 1901, it provided the following update on Eagle River Lighthouse:

This is supposed to be a coast light and guide to Eagle River. As a coast light it can not now be regarded as of any importance, being only a lens lantern and located back from the general line of the coast. It is of no use as a guide to the entrance to Eagle River, because the mouth of that river is now entirely blocked up with sand. An old dock which was once in use at this point is now rotten, and has not had a pound of freight on it for years. There is no commerce in the locality, and no vessels of any draft, except the light-house tenders with supplies go near the place. There is a rocky reef about one-half mile offshore, extending for several miles along the coast, which makes it dangerous to approach. For several years past no repairs have been made to this dwelling on account of the probability that the light might be discontinued. As a consequence, it is in a far advanced state of decay. If the station is to be continued, all the woodwork of the roof, doors, windows, outhouses, board walks, and fences should be renewed.

Eagle River Lighthouse was sold at auction on August 2, 1908 to John Vertin of Calumet, who submitted the winning bid of $925. Jim Vivian III acquired the lighthouse in 2000 from his father and grandfather, who had purchased it from the Vertin family around 1996. Edward Cole purchased Eagle River Lighthouse in 2014 from Jim Vivian, and after a thorough restoration, offered it as a vacation rental.

For a larger map of Eagle River Lighthouse, click the lighthouse in the above map.

From Highway 26 in Eagle River, turn north on West Main Street on the west side of the Eagle River. Eagle River Lighthouse will be on your left as you near the lake. The lighthouse is now available as a vacation rental.