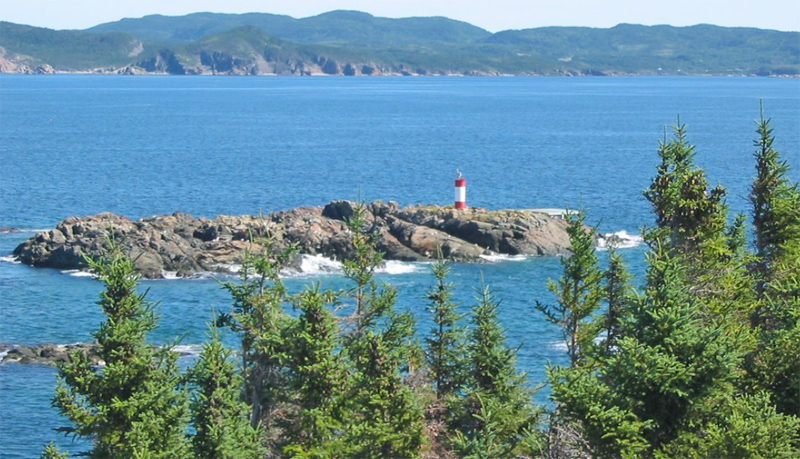 Little Bay Island is situated in the western end of Notre Dame Bay and has two good harbours for small vessels: North Harbour and Southern Harbour. Southern Harbour, on the southeast part of the island, is entered between Goat Island and Macks Island.

In 1907, work began on a lighthouse on Outer Shoal Tickle near the southeast end of Macks Island to mark the entrance to Southern Harbour, and the following Notice to Mariners was published in 1908 to advertise the establishment of the light:

A lighthouse has been established on the port side of the entrance to the southern harbour, Little Bay Island, Notre Dame Bay, east coast of Newfoundland.

The lighthouse tower is a circular iron building, painted in black and white vertical stripes. The tower is 18 feet high from base to top of lantern.

The light is an occulting white light, visible for 2 ½ seconds and eclipsed for 2 ½ seconds alternately. The light is elevated 77 ½ feet above sea level, and should be visible 10 miles in all directions seaward. The illuminating apparatus is dioptric of the sixth order.

A dwelling house and stores, both painted white, stand a short distance from the tower.

The light will be maintained annually during the period of open navigation.

In 1910, a boom and derrick were added to the station.

Edward Paddock served as keeper of the lighthouse from the time it was established through at least 1921. The lighthouse was first listed as unwatched, meaning it no longer had a resident keeper, in the 1932 List of Lights, and at this time, the lights characteristic was changed from an occulting light to a white flash every five seconds.

The 1935 List of Lights shows that a white square wooden tower, with sloping sides and topped by a red lantern, had replaced the circular iron tower. This wooden tower was in use through at least 1960. In 2021, a cylindrical tower with red and white horizontal bands was displaying a flashing white light with a period of six seconds to mark the entrance to Southern Harbour.

In 2019, the residents of Little Bay Island voted to resettle. The population of the island had been in steady decline in recent years. The main employment source, a crab processing plant, closed in 2010, leaving the community with very few paying jobs. The MV Hazel McIsaac had been providing ferry service to the island from Pilleys Island, but this ended on December 31, 2019 along with the islands hydro electricity service. The government paid around $8.7 million to resettle the community, but should save roughly $20 million over the next twenty years, mostly from the cancellation of the ferry service. One couple elected to remain on the island and are prepared to live off the grid in their recently built home.

For a larger map of Little Bay Island Lighthouse, click the lighthouse in the above map.