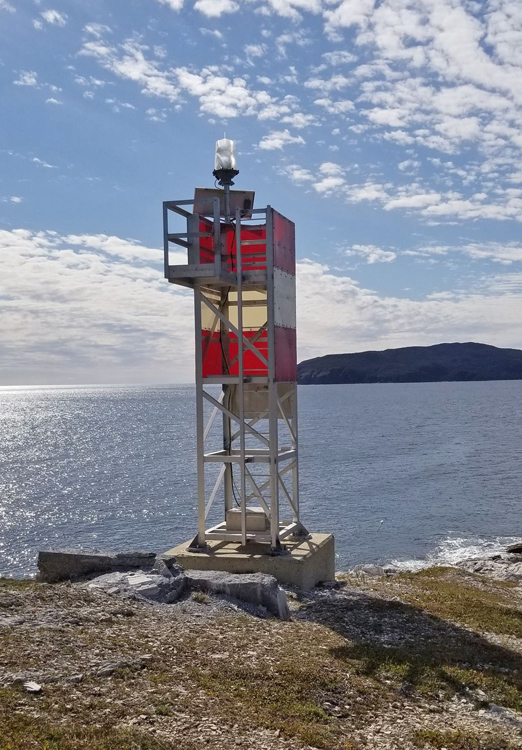 The small fishing community of Englee is located on the east side of Newfoundlands Great Northern Peninsula in a sheltered harbour on the northern headland of Canada Bay. Canada Head forms the southern side of the entrance to Canada Bay, and Cape Daumalen, the northern side. Englee Island (Grevigneux Island) and Barred Island form the western side of the harbour at Englee.

In 1906, the government of Newfoundland established a light at the entrance to Englee Harbour in the form of a lens lantern, hoisted to an open framework that was painted white. The light served only as a harbour light and was in operation from roughly June through the end of December each year.

A Notice to Mariners, published in the fall of 1909, advertised an upgraded light to mark Englee Harbour, known at the time as Aiguillettes Harbour:

The light shown at the entrance to Aiguillettes Harbour, Canada Bay, east coast of Newfoundland, has been changed from a fixed white light to a fixed red light.

The light is shown from a wooden tower, square in plan, with sloping sides, 15 feet high, painted white.

This lighthouse stood on White Point, the southern end of Englee Island. Noah Gillard served as the first keeper of the lighthouse. The 1921 census shows that besides looking after the light, he was also a fisherman and served as the towns postmaster.

The wooden lighthouse remained standing on Englee Island through at least 1960. In 2021, a square, skeletal tower was displaying a flashing white light with a period of four seconds from the southern tip of Englee Isand.

For a larger map of Englee Lighthouse, click the lighthouse in the above map.

White Point Trail will take you along Englee Island and provide a change to see the modern light.