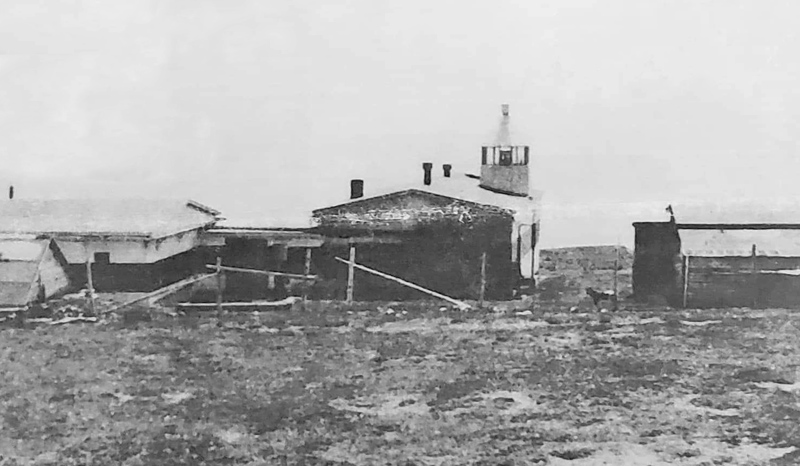 Port au Port Peninsula was part of the French Shore from 1783 until 1904, when France relinquished its fishing rights in the area. The French were only allowed to establish seasonal fishing premises on the French Shore, but some fishermen did set up permanent settlements. The peninsula has the highest percentage of French-speaking citizens in Newfoundland (15%), and in 1971 it was designated the only bilingual district in the province.

In 1913, work began on a fog alarm station on Cape St. George. The fog alarm station commenced operation in 1914, and then in 1915, the following Notice to Mariners advertised that a light was being added to the station:

Position  On the extreme point of Cape St. George.

Description  Diaphone, operated with air, compressed by an oil engine. The diaphone will give one blast of 2 ½ seconds duration every minute, thus: blast 2 ½ seconds, silent interval 57 ½ seconds.

Colour  White with one red horizontal band around centre of each building.

Light to be established  During this season, without further notice, a light will be established in a white lantern on the roof of the fog alarm building.

Remarks  The light will be visible from all points seaward.

A new cylinder head and circulating pump were supplied to the station in 1918.

Eugene Cornect, who was born at Cape St. George in 1894, was part of the Newfoundland Regiment that fought at Gallipoli in 1915 during the First World War. Eugene was shot in the leg during fighting at the Dardanelles.

Shortly after returning home, Eugene visited the station at Cape St. George and was given a tour by the keeper, Mr. Guff. After displaying his aptitude with the equipment, Eugene was offered to take over as light keeper. In a newspaper article published in 1972, Keeper Cornect provide some details about the light and fog signal:

The light source consisted of a large kerosene lamp at the top of a church-shaped steeple. It burned fiercely and was made to blink by using an opaque mask that was designed to rotate around the kerosene lamp, periodically blocking the light. The mask operated from a hug clockwork gear system which had to be wound up daily. It would last a whole night and in 15 years never once failed to work.

For foggy weather, the lighthouse was outfitted with an air-operated foghorn. To get the air pressure required, two big hand-cranked kerosene engines were installed (one as a back-up system) to pump a set of bellows which filled a big boiler with a night-long air supply. When pressure in the boiler tank reached the proper magnitude, a valve was opened letting the air into the horn system.

The horn was activated by the rotating mask on the light. Each time it rotated, it pressed down a small button, releasing air and sounding the horn. Thus the main operation of the lighthouse was automatic and the keeper was there mainly for maintenance.

On October 14, 1930, fire destroyed the light and fog alarm station at Cape St. George, forcing the light and fog alarm to be discontinued. The station was not rebuilt. Keeper Cornect believes that someone set fire to the storage shed which contained 700 gallons of oil, gasoline, and kerosene. Cornect had enough time to get help and save all of his furniture from the four-bedroom dwelling before the wind spread the fire.

A portion of the stations concrete foundation survived, and in 1972 there was a museum built atop it in Lands End Park. The museum is no longer standing.

Eugene Cornect married in 1917 not long after returning from the war and raised eight sons and five daughters. The 1935 census, shows that he eleven children at the time, ranging in age from 17 down to six months. The oldest seven children were likely born at the station on Cape St. George.

After fire destroyed the station, Keeper Cornect moved into another home on the cape and turned to farming. He raised thirteen head of cattle and fourteen sheep, and operated a sawmill for some time. After he suffered a fall later in life, his leg that had been injured in the war, had to amputated as it had never properly healed. When asked what he like best about his life as a keeper, he replied, When the ice was on the shore, the lighthouse didnt operate because there were now boats. We had a good time then.

For a larger map of Cape St. George Lighthouse, click the lighthouse in the above map.

The former site of the station can be reached by following Highway 460 west along the southern shore of Port au Port Peninsula.