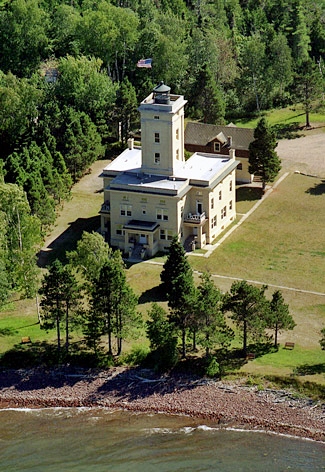 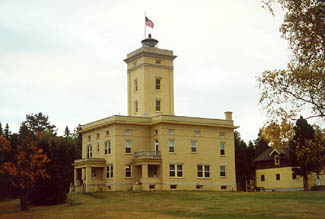 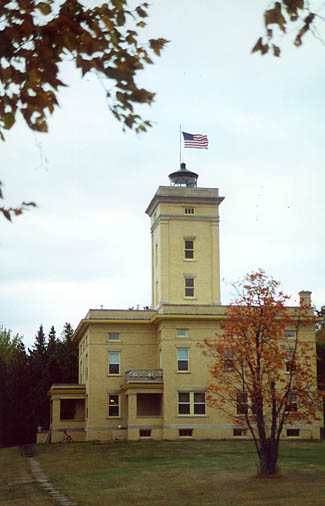 In 1892, the Lighthouse Board noted: Vessels bound east from the head of Lake Superior first make the land and commence to turn in rounding Keweenaw Point at the Sand Hills, 12 miles west of Eagle River. As maritime traffic at Eagle River had ceased, the Board recommended that Eagle River Lighthouse be discontinued and replaced with a more powerful coastal light at Sand Hills. Congress authorized the construction of the new station in 1893 but never provided the necessary funds. The Lighthouse Board repeated its annual plea for funding up until 1908, when Eagle River Lighthouse was decommissioned.

An article in the Detroit Free Press in October 1908 announcing the planned closure of Eagle River Lighthouse noted:

It is generally presumed the decision to permanently abandon the station, which is one of the most important on Lake Superior, is reached in the hope that the attention of congress to the absolute necessity of a light at this point, will be closely drawn with the suspension of this warning beacon.The decision of the lighthouse board to discontinue the light at the close of the season, before any provision is made for a new light, is likely to raise a storm of protest from mariners who navigate Lake Superior.

Eagle River Reef, a rocky ledge located about a half-mile offshore and also known as Sawtooth Reef, parallels Keweenaw Peninsula for several miles near Eagle River. On October 18, 1910, the new 600-foot steamer W.C. Moreland ran aground on the reef during smoky conditions caused by a forest fire. Salvage efforts the following summer were able to retrieve 278 feet of the vessels stern, which were incorporated into the Sir Trevor Dawson, but the loss was still nearly half-a-million dollars. In its annual report for 1910, the Lake Carriers Association listed ten vessels that had struck the reef in the past decade, with losses of over one million dollars, and urged the Bureau of Lighthouses to establish a light and fog signal in the vicinity as soon as possible. (The Bureau of Lighthouses replaced the Lighthouse Board in 1910).

In 1911, the Lake Carriers Association addressed the need for a light at Sand Hills with these words:

The great necessity for this aid to navigation is most eloquently pleaded by the large number of disastrous wrecks which have occurred in this vicinity and all of which might have been avoided if a lighthouse and a fog signal station had been in existence at this point. The wreck of the splendid new steamer W. C. Moreland, lost on this shore on one of her very first trips, is attributed to the absence of a warning light or signal to notify the master of his approach to the dangerous reefs lying along this shore, and is the latest argument in favor of this aid.

The Bureau of Lighthouses requested $75,000 for a light and fog signal at Sand Hills, four miles west of Eagle River, in 1912, and Congress finally provided $70,000 for the much needed station on June 12, 1917. In the meantime, a gas and bell buoy that exhibited an occulting white light at a height of ten feet above water was placed on the reef on June 10, 1916. On September 14, 1917, a temporary light and an electric siren were established at Sand Hills, and the buoy was removed. This fixed white light was mounted atop a black steel mast at a height of thirty feet above the lake.

By July 1918, detailed plans for the new station were ready and workmens quarters had been built on the purchased reservation. It was thought that the station would be placed in operation during the 1918 season, but stormy weather and nondelivery of the lantern room delayed its completion until early in the 1919 season.

The following description of the newly completed station at Sand Hills was published by the Commissioner of Lighthouses in 1919:

Purpose.The shore line of Lake Superior off Keweenaw Point and abreast of Eagle River, Mich., is fringed with rocky shoals on which a number of vessels have been wrecked. The purpose of this project is to provide an adequate light and fog signal station to mark these reefs.

Site.This station is located about 3 ¾ miles west of the town of Eagle River, Mich., on Five Mile Point. The reservation comprises an area of about 47 acres heavily wooded along the rocky shore line, with sand hummocks inland. The land about the station has been cleared to permit an uninterrupted view of the light and station from seaward.

The combined tower and dwelling, which is the main structure, is of buff-colored, pressed brick. This building consists of a square tower 70 feet high and three separate apartments, which surround it on the front and two sides. The location is about 150 feet inshore on sand foundation. A steel grillage supports the tower proper, which is of fireproof construction throughout, having steel framing, concrete floors, and steel stairs, doors, window sash, and frames. The cornice and balustrade are cut stone and the lantern deck cast iron. The lantern is of the 7 foot 1 inch diameter helical bar, revised design. The second story of the tower is used as an office by the keepers and has separate entrances into each apartment. The basement, which is accessible from the cellar of each apartment, contains a central heating plant and control valves for the pneumatic water-supply system.

The apartments, or keepers quarters, have timber floors, partitions, etc., and are provided with fire walls where they adjoin. The roofing material is of copper. The side apartments have each six rooms and the front five rooms, in addition to bathroom, pantry, and basement. All are supplied with cooking stoves, hot and cold water, modern plumbing, and hot-water heat.

The fog-signal house is of hollow tile, with stucco finish, asbestos shingle roof, and concrete floor. Boathouse and barn are frame and oil house of brick, similar to main structure.

Illuminating apparatus.The illuminating apparatus is a fourth-order, ball-bearing mounted, flashing lens revolved by a weight-operated clock, producing one flash of 24,000 candlepower every 10 seconds. The light is 91 feet above lake level and is visible approximately 18 miles in clear weather. A type B, 35-millimeter, incandescent oil-vapor lamp is used.

Fog signal.The fog signal consists of a duplicate installation of type F air diaphones and straight-line, direct-connected air compressors and oil engines; blast, 5 seconds every 30 seconds. The timing mechanism is belt-driven from engines. The audibility is approximately 7 miles under favorable conditions. The cast-iron diaphone resonators project through the gable on the north end of the fog-signal building on a line normal to the traffic lane.

Quarters.One keeper and two assistants are quartered in the main building described above.

Landing dock and grounds.A large amount of clearing has been done on the reservation. Sidewalks connect the principal structures and the landing dock, and an industrial track laid for transporting supplies from dock to station buildings. The concrete dock is built along the inside of a reef, where there is from 4 to 6 feet of water, affording good landing facilities for boats delivering supplies. Water for the fog-signal engines is obtained from a well supplied by natural drainage, while water for station use is obtained directly from the lake.

William R. Bennetts, a younger brother of Thomas Bennetts, the last keeper of Eagle River Lighthouse, was appointed the first head keeper of Sand Hills Lighthouse. William Bennetts would serve as the lights only head keeper, as in 1939, an automatic light was established, the fog signal was discontinued, and the station personnel was reduced.

On March 28, 1921, the characteristic of Sand Hills Light was changed to a group of two flashes every thirty seconds in this manner: 1.2-second flash, 6.3-second eclipse, 1.2-second flash, 21.3-second eclipse. When the station was automated in 1939, an acetylene light, which produced a flash every fifteen seconds, was established atop the fog signal building at a focal plane of thirty-two feet. In 1942, the light was moved to a tower with a focal plane of sixty feet, and then in 1943 it was returned to the lighthouse.

Sand Hills Light was discontinued in 1954, but not before the station was used for a year during World War II to train some 200 Coast Guard recruits. In July 1958, the General Services Administration announced that it would be accepting sealed bids for Sand Hill Light Station, which it said was suitable for a summer home, a fishing and hunting club, or a resort. H. Donald Bliss, an insurance agent from the Detroit area, submitted the winning bid of $26,000. After using the lighthouse as a summer home for a few years, Bliss sold the property to Bill Frabotta, a photographer from Dearborn.

Frabotta refurbished the fog signal building and used it as a cottage, where for many years his family enjoyed summer stays and weekend getaways. After thirty years of ownership, Frabotta decided to convert the lighthouse into a Victorian bed and breakfast, and between 1992 and 1995, he completely remodeled the building. Sand Hills Lighthouse Inn opened in 1995, offering eight rooms, each with a private bath and either a king or queen-size bed. Bill Frabotta served as the consummate innkeeper, while his wife Mary Mathews delighted guests with her delicious pastries and nightly performances on the grand piano. Bill and Mary just happen to have the same first names as the first couple to live in the lighthouse, Bill and Mary Bennetts.

Bill Frabotta passed away at the lighthouse in November 2016. Mary continued to run the inn until 2019, when Edward Cole, owner of nearby Eagle River Lighthouse, purchased Sand Hills Lighthouse. Cole, a historical preservationist who has a family lineage on the Keweenaw Penninsula that goes back to the 1850s , closed the property for a multi-year restoration. Cole has also purchased over 1,000 contiguous acres surrounding Sand Hills Lighthouse to protect the area from development and allow for a network of hiking trails. Cole speaks fluent Japanese and has served as an executive in Asia for Fender Musical Instruments Corporation and Ralph Lauren.

A fifth-order Fresnel lens, never used at Sand Hills Lighthouse, has been on display on the second floor of the tower.

Located eight miles north of Ahmeek on the northern shore of the Keweenaw Peninsula.
Latitude: 47.39186, Longitude: -88.3707

For a larger map of Sand Hills Lighthouse, click the lighthouse in the above map.


The rooms in this bed and breakfast are done in a colorful, Victorian style, and Bill and Mary, who run the place are quite colorful too. Bill provides tours of the place, giving the detailed history of how he purchased the dilapidated structure and caringly restored it to its current glory, while Mary provides a wonderful dessert each evening to be consumed while she plays the grand piano. Her favorite piece during our stay was Cristofori's Dream. Mary became quite moved when she described how guests come to the B&B and in that intimate setting share food, music, and conversation, but then slip out of her life again after just a few days. She obviously puts a lot of heart into her job.


This is a great lighthouse B&B to stay at even if some people think it looks like a dormitory. It's right on the lake, the hostess plays the piano for the guests each night even taking requests, and the desserts are scrumptious.