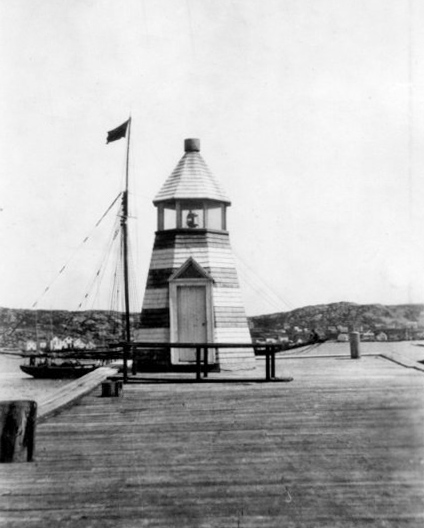 The Town of Twillingate is situated around a harbour formed by North Twillingate Island and South Twillingate Island. The spelling of the towns name was originally Toulinguet, after a group of islets near the French port of Brest, but has been anglicized to Twillingate. When the eastern boundary of the French Shore was moved from Cape Bonavista to Cape St. John in 1783, Twillingate became the main commercial base in the area, earning it the status of the capital of the north. The towns population peaked at 3,694 in 1884, at which time 1,500 men from the area were engaged in the Labrador fishery. In 2016, the population of Twillingate was 2,196.

In 1876, Long Point Lighthouse, a major light, was established at the northern end of North Twillingate Island. A minor light to mark the wharf in the harbour at Twillingate was built in 1885, but the following report made two years later indicated it was defecient: Neither the building nor light are satisfactory, the former being badly arranged, and the latter only a common lamp. It is desirable that a new structure should be provided. The lighthouse on the wharf was rebuilt and supplied with new lamps in 1889.

In September 1907, the sea destroyed the light on the wharf at Twillingate. A new tower and light were placed on the wharf in 1909. This new lighthouse likely consisted of an octagonal wooden painted with red and white horizontal bands as that was how the tower was described in subsequent Light Lists. The wharf light exhibited a fixed red light.

The wooden, octagonal tower was on the wharf through at least 1960. In 2021, a cylindrical mast was being used to display a flashing red light on the wharf at Twillingate.

For a larger map of Twillingate Wharf Lighthouse, click the lighthouse in the above map.

A mast light exhibits a light from the whart at Twillingate.