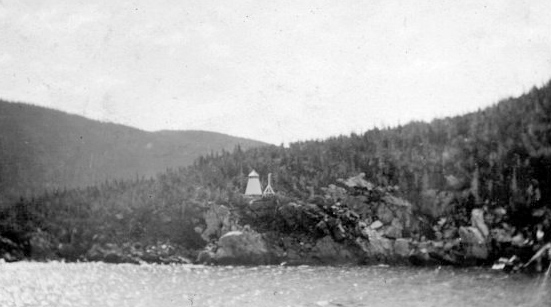 In 1906, three fixed white lights were established on White Bay at Jacksons Arm, Seal Cove, and Western Cove. Each of these lights consisted of a lens lantern that was hoisted on an open frame work that was painted white. The lights were kept in operation during open navigation, or from June to January. The light at Seal Cove was situated on the northern extremity of Southern Arm Head, about 700 metres west of the church spire at Seal Cove.

In 1909, a square, wooden, enclosed tower with a height of about fifteen feet replaced the open framework used to display the light at Seal Cove, and at this time, the characteristic of the light was changed from fixed white to fixed red.

For a larger map of Seal Cove Lighthouse, click the lighthouse in the above map.

A mast light exhibits a light from the wharf at Seal Cove.