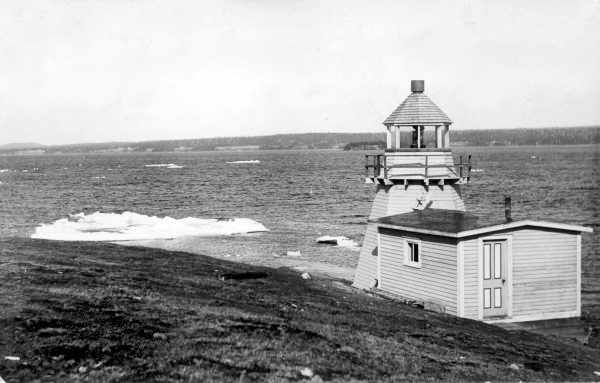 Exploits River, the longest river in Newfoundland, empties into Bay of Exploits, which extends from the rivers mouth to Notre Dame Bay. Over thirty islands are found in Bay of Exploits, the largest of which is New World Island.

In 1911, Surgeon Cove Point Lighthouse was built on one of the Exploits Islands, outer islands in the bay, and that same year, four other lights were built in the bay on Upper Black Island, Thwart Island, Grassy Island, and Lower Sandy Point to serve as guides to and from the mouth of Exploits River.

In 1913, a lighthouse was built at Mill Point, which is located between Northern Arm and Peters Arm, and just north of the mouth of Exploits River. A 1919 edition of Newfoundland Pilot provides the following information on Botwoodville, known now as Botwood, that is located at Mill Point:

Botwoodville, the settlement around Peter Arm, has a population of 400 to 500 persons, the male members of which are employed in the sawmill worked by the Exploits Lumber Co.

The lumber company obtains its timber from extensive forests in the valley of Exploits River, and the logs are driven down the larger streams into the bay, whence they are towed to the sawmill.

The principal wood exported to Europe is pine deals, but a large trade is done with St. Johns and other local ports in such building lumber as boards, palings, and scantlings. About three large sailing vessels and the same number of steam vessels load here annually for London.

There are two stores where general supplies may be obtained in small quantities, but the supply of fresh provisions can not be relied on.

The sawmill was located 550 metres southwest of the lighthouse on Mill Point, and two wharves were located in the small cove there where ships could load lumber and other materials.

Mill Point Lighthouse consisted of a wooden, octagonal with sloping sides that stood eighteen feet tall and displayed a fixed green light at a height of twenty-eight feet above the surrounding water. In 1917, an annex was added to the tower for the keepers use.

Mill Point Lighthouse was listed as unwatched starting with the 1932 List of Lights. At that time, the lights characteristic was changed from fixed green to fixed red. In 2021, a square, skeletal tower was displaying a flashing red light at Mill Point in Botwood.

For a larger map of Mill Point Lighthouse, click the lighthouse in the above map.

A modern light is exhibited from a tower on Mill Point.