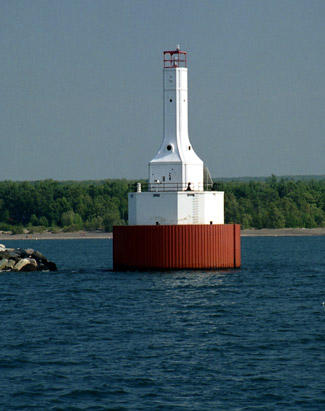 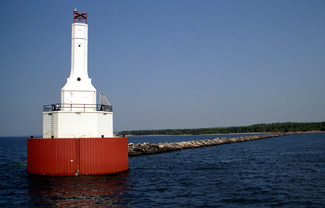 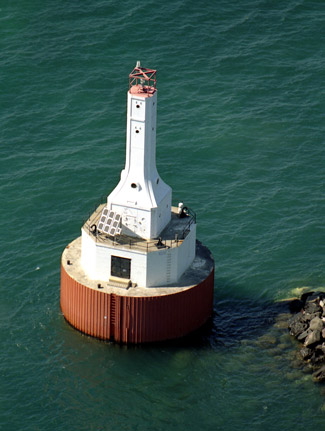 Twenty-five-mile-long Keweenaw Watery cuts across the Keweenaw Peninsula, connecting Keweenaw Bay on the east to Lake Superior on the west. Originally built and maintained by private ventures, the waterway consists of five miles along the Portage River, seventeen-and-a-half miles in Portage Lake, and two-and-a-half miles through a man-made canal that links Portage Lake to Lake Superior. Portage Lake and Lake Superior Ship Canal Company was formed in 1864 to construct the two-and-a-half-mile-long canal. Excavations began in 1868 and continued until 1871, when financial difficulties led to the dissolution of the company. Following litigation, the canal was finally completed in 1873 by the newly formed Lake Superior Ship Canal, Railway and Iron Company.

To recover construction costs, the owners charged a heavy tax on vessels using the waterway, which was known at various times as Portage Lake and Lake Superior Canals, and Portage Lake Ship Canals. This financial burden limited shipping through the waterway until the federal government acquired it in 1891 for $350,000. The waterway is a shortcut for vessels sailing between Marquette and eastern ports such as Ashland and Duluth, but for steamers sailing the length of Lake Superior, no significant distance is saved by using the waterway. During the stormy fall season, the waterway would see a dramatic increase in traffic as vessels preferred its protected waters to Lake Superior.

On March 3, 1871, Congress allocated $14,000 for rebuilding the lighthouse at Eagle River, but when a new light there was deemed unnecessary, the Lighthouse Board received authorization in 1873 to use the money for a lighthouse at the entrance to Portage Lake ship-canal. A deed to a roughly one-acre site on the western side of the entrance to the canal from Lake Superior was obtained in March 1874, and a work crew, which had just completed Outer Island Lighthouse, began work on the ship canal lighthouse later that year. This lighthouse consisted of an eight-and-a-half-foot-square tower attached to the gable end of a brick keepers dwelling, and the light from its third-and-a-half-order Henry-Lepaute Fresnel lens was first exhibited on the night of November 20, 1874. The lens was situated thirty-three feet above the ground, but due to the bluff on which the lighthouse stood, the light had a focal plane of fifty-six feet above the lake.

Peter Malone, a former captain of ocean-going vessels, was the first keeper of Portage Lake Ship Canal Lighthouse. He served for three years, before John H. Malone, his son, took charge of the light. In 1878, John Malone and Williams Stevens, who was keeper of the lighthouse on Menagerie Island, just off Isle Royale, swapped stations. John Malone would serve on Menagerie Island for thirty-two years, while Portage Lake Ship Canal Lighthouse continued to see a string of head keepers with short terms of service until Noah J. Bennetts arrived in 1902 and remained for over thirty years.

In 1878, the Lighthouse Board noted that a light was needed on the west pier at the canals entrance, and the following year a lease for the pierhead was obtained from the canal company. A wooden, frame tower was erected on the pier during the 1879 season, and its light was exhibited for the first time on November 15 of that year. To provide access to the light when the pier was awash, a 900-foot-long elevated walkway was built in 1881. Six years later, a wooden pyramidal bell tower was placed between the pierhead lighthouse and the outer end of the pier. A Stevens striking apparatus was installed in the enclosed upper portion of the tower to toll the 1,500-pound bell that was suspended from a beam projecting from the tower.

In 1892, a year after the federal government acquired the canal, the Lighthouse Board requested a steam fog signal for the pier at the canal entrance, and Congress provided $5,500 on March 2, 1895 for the project. A third-story and a cast-iron deck and lantern were added to the bell tower to convert it into a lighthouse, and the fog signal building was built just behind it. Work was nearing completion when a storm on September 22, 1895 washed the fog-signal boilers and machinery into the canal. A wrecking outfit from Marquette was brought in to retrieve the items, allowing the fog signal to be completed late that year, and the new ten-inch steam whistle was placed in operation at the opening of navigation in 1896.

To provide living space for the additional keeper needed to run the fog signal, the brick dwelling was converted into a duplex, with six rooms in each apartment. At the same time, a brick oil house was erected, and a ten-foot brick extension was added to the tower so the light would be visible above the enlarged dwelling. The new main light, now with a focal plane of sixty-six feet, was first exhibited on September 26, 1896. The power of the light was increased on November 7, 1912, by changing its illuminant from oil to incandescent oil vapor.

During the summer of 1889, Keeper William McGue discovered a cache of copper knives and spear points while digging out a tree stump on the lighthouse grounds. The artifacts, which provide clear evidence that Native Americans were aware of the vast copper deposits on Keweenaw Peninsula, were later purchased by the Chicago Natural History Museum.

Arrowhead breakwaters to protect the waterways entrance from Lake Superior were completed in October 1901 and temporarily marked with lanterns displayed from small iron masts. Two square, skeletal, pyramidal towers, with platforms, railings, and focal planes of twenty-four feet, were delivered to the Detroit lighthouse depot by a contract on June 15, 1903 and then installed on the breakwaters and lit the following November.

As part of a widening of the canal in the 1930s, it was necessary to demolish the old brick lighthouse. In its place, a forty-six-foot-tall, skeletal tower was erected in 1937, and a radiobeacon was established nearby in 1938. A new three-family dwelling was completed for the keepers in 1938.

Work on widening the entrance between the breakwaters by eighty feet was completed in 1949, and the following year, the current light, known as the Keweenaw Waterway Upper Entrance Light, was established atop a square, white tower that has a focal plane of eighty-two feet. This tower is similar to those erected at Conneaut, Ohio, Port Washington, Wisconsin, and Indiana Harbor, Indiana in the mid-1930s.

In 1958, James E. Collins retired from Keweenaw Upper Entrance Station after serving for thirty-nine years as a lighthouse keeper. His career began at Detroit River Lighthouse in 1919 and included stints at Point Iroquois, Middle Island, Stannard Rock, Manitou Island, and Huron Island, before he was transferred to the upper light in 1951. For his lengthy service, Keeper Collins received the Albert Gallatin Award.

Besides the 1950 light, a few remnants of the shore station survive, including the 1938 triplex, a barn, and the fog signal building. Some of these structures have been relocated and are now privately owned.

Little commercial traffic passes through Keweenaw Waterway these days as the modern Great Lakes freighters are too large, but pleasure craft and an occasional excursion vessel still use the historic passage.

Located at the western end of the Keweenaw Waterway which bisects the Keweenaw Peninsula.
Latitude: 47.23454, Longitude: -88.63029

For a larger map of Keweenaw Waterway Upper Entrance Lighthouse, click the lighthouse in the above map.

Take Highway 203 west out of Hancock roughly 9.5 miles to McLain State Park. Once in the park, turn left and follow the road to a parking area from where you can view the light at the end of the breakwater.