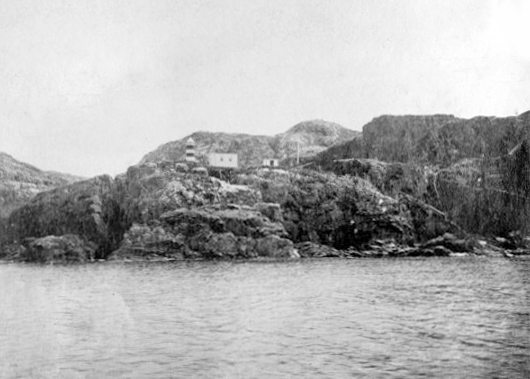 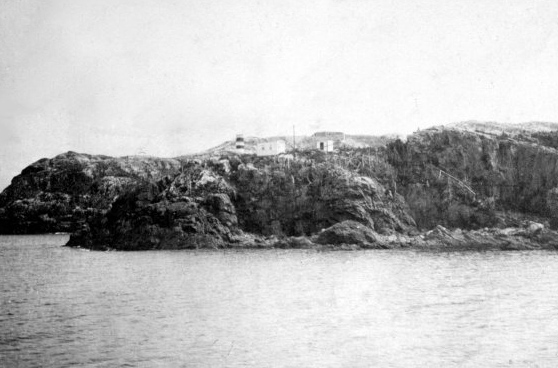 In Newfoundland English, a tickle is defined as: A narrow salt-water strait, as in an entrance to a harbour or between islands or other land masses, often difficult or treacherous to navigate because of narrowness, tides, etc; a settlement adjoining such a passage. There are numerous settlements and passages in Newfoundland that carry the name tickle. Some examples are: Baccalieu Tickle, Bakers Tickle, Black Tickle, Greenspond Tickle, and Gull Tickle.

In 1908, a lighthouse was built opposite Alcock Island to mark the eastern entrance to Leading Tickles. A Notice to Mariners published that year advertised the establishment of the new light:

A lighthouse has been established on the southern side of the eastern entrance to Leading Tickles, Notre Dame Bay, east coast of Newfoundland.

The lighthouse tower is a circular iron building, painted [in] red and white horizontal bands, two of each. The tower is 18 feet high from base to top of lantern.

The light is an occulting white light, visible for 7 seconds and eclipsed for 3 seconds alternately. The light is elevated 83 feet above sea level, and should be visible 10 miles in all directions seaward. The illuminating apparatus is dioptric of the sixth order.

A dwelling house and store, both painted white, stand a short distance west of the tower.

The light will be maintained annually during the period of open navigation.

Leading Tickles Lighthouse was listed as unwatched starting with the 1932 List of Lights. At that time, the lights characteristic was changed from what it was originally to a white flash every three seconds. Various men from the community tended the light through the years.

The iron lighthouse was in use through at least 1950. In 2021, a square, skeletal tower, with a red rectangular daymark having a white vertical stripe, was displaying a flashing white light with a period of three seconds at Leading Tickles.

For a larger map of Leading Tickles Lighthouse, click the lighthouse in the above map.

A modern light is exhibited at the eastern entrance to Leading Tickles today.