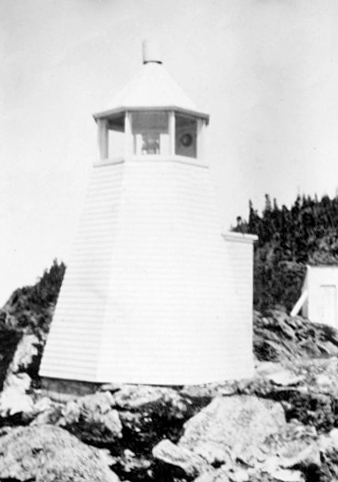 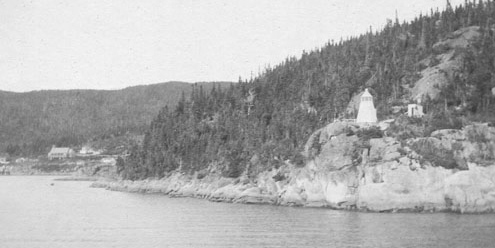 Jacksons Arm is a settlement on White Bay. The entrance to Jacksons Arm from White Bay is between Eastern Head and Western Head, which are 400 metres apart. Immediately inside the entrance, the arm expands to a width of 800 metres and has two small coves, Wicks Cove and Schooner Cove, on the northern shore which have houses on them.

In 1906, three fixed white lights were established on White Bay at Jacksons Arm, Seal Cove, and Western Cove. Each of these lights consisted of a lens lantern that was hoisted on an open frame work that was painted white. The lights were kept in operation during open navigation, or from June to January. The light at Jacksons Arm was on the southern end of Eastern Head.

In 1910, a new optical apparatus was placed at Jacksons Arm to bring the light up to the standard of newer lights in Newfoundland. It was likely at this time that a white hexagonal tower was built to house the light. This wooden lighthouse was in use through at least 1960.

George Head served as the first keeper of the light, and others who cared for it over the years include Lot Head and Joseph Combdon.

In 2021, a square, skeletal tower with a red-and-white rectangular daymark was displaying a flashing white light with a period of six seconds at Jacksons Arm.

For a larger map of Jacksons Arm Lighthouse, click the lighthouse in the above map.

A modern light is exhibited at Eastern Head today.