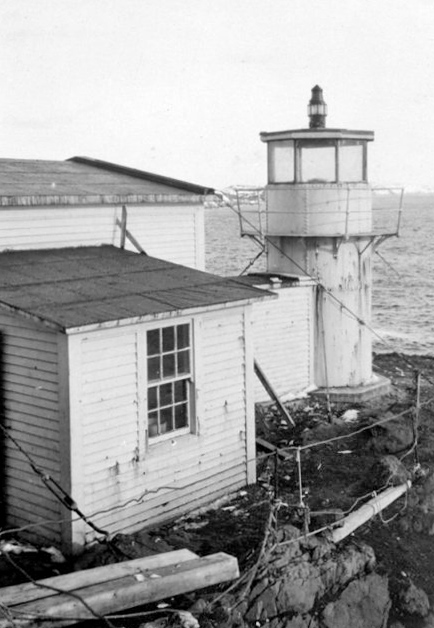 Herring Neck is a fishing community on the northeast end of New World Island in Notre Dame Bay. Today, Herring Neck encompasses the contiguous communities of Merritts Harbour, Hatchet Harbour, Sunnyside, and Salt Harbour, but at one time, the name was applied to Pikes Arm and Green Cove, communities situated across Goldson Arm (Goshens Arm) to the east. The name Herring Neck reportedly comes from the practice of early fishermen who portaged loads of herring across the narrow neck of Pikes Arm.

In 1909, a lighthouse was built on Caplin Cove Head on Ship Island to guide mariners into Goldson Arm, which is entered between Caplin Cove Head and the headland at Pikes Arm. Goldson Arm runs southwest about six kilometres from its entrance. The following Notice to Mariners was published in 1909 to advertise the new light:

A lighthouse has been established on Caplin Cove Head, entrance to the port of Herring Neck, Notre Dame Bay, Newfoundland.

The lighthouse tower is a circular iron building, painted white. It is 18 feet high from base to top of lantern.

The light is a fixed white light, elevated 94 feet above the sea, and should be visible 12 miles in all directions seaward. The illuminating apparatus is dioptric of the sixth order. The light will be maintained annually during the period of open navigation.

The dwelling and store are located a short distance from westerly from the tower, and are painted white.

In 1921, an acetylene gas self-controlled light was installed at Caplin Cove Head in place of a kerosene oil light. This changed the characteristic of the light from fixed white to a white flash every three seconds and eliminated the need for a resident keeper. The light on Caplin Cove Head was active through at least 1974. In 2021, a flashing white light with a period of three seconds was being shown from Ship Island, just a short distance from where the historic Caplin Cove Head Lighthouse stood.

For a larger map of Caplin Cove Head (Herring Neck) Lighthouse, click the lighthouse in the above map.

A modern light is exhibited from the eastern end of Ship Island today. The light should be visible from Pike's Arm Lookout.