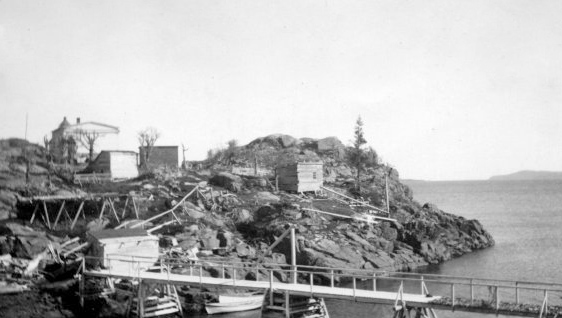 In 1911, a Notice to Mariners announced the establishment of a light on Upper Black Island:

On November 1, 1911, a 5th order, dioptric, fixed white light was established on the northwestern point of Upper Black Island, Bay of Exploits, northeast coast of Newfoundland.

The light is exhibited from a circular iron tower, painted red, attached to a white dwelling. A small storehouse, painted red, stands on the eastern side of the dwelling.

The station was actually located on a small islet off the northwest end of Upper Black Island.

P. Arnaud was employed as the first keeper, but he was soon replaced by Walter Stride.

Upper Black Island Light first appeared as being unwatched on the annual List of Lights in 1931, when its characteristic was listed as a flashing white light every three seconds instead of the fixed white light it had been since it was established.

The red circular iron tower was in use through at least 1960. In 2021, a square, skeletal tower with a red, rectangular daymark with a white horizontal stripe, was displaying a flashing white light with a period of three seconds from the small islet off the northwest tip of Upper Black Island.

For a larger map of Upper Black Island Lighthouse, click the lighthouse in the above map.

The light is best seen from the water.