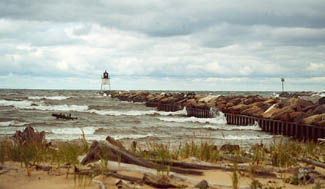 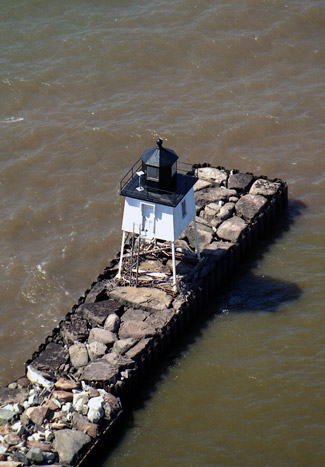 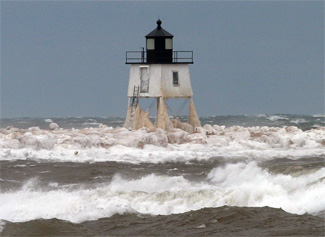 Ontonagon River is the largest river to flow into the south shore of Lake Superior, but a bar at the rivers mouth prevented ships from using the river as a harbor. After the famous Minesota Mine opened near Ontonagon in 1848, vessels that brought in supplies and carried away the prized copper, had to anchor offshore and load and unload with the aid of lighters.

In 1851, James Carson constructed the first piers at the mouth of the river, reasoning that if ships couldnt enter the harbor, the harbor would have to be extended out into the lake. Built entirely of wood, the first pier was a quarter-of-a-mile long and equipped with a narrow gauge track, but it proved to be no match to the storm-tossed waters of Lake Superior.

After Charles T. Harvey finished the Soo Canal Locks in 1855, opening up Lake Superior to the lower lakes, he was recruited by Ontonagon County and the mining companies to construct stout piers at the rivers entrance in return for a percentage of all copper shipped out of the harbor. Harvey constructed 900-foot piers, but his work proved to be inadequate as well.

Efforts to solicit the federal governments help in improving the harbor began in 1852 when a Mr. Smith presented a petition of citizens of Ontonagon, Michigan, praying the construction of piers at the mouth of the Ontonagon river. A federal project was finally adopted in 1867, at which time the entrance to the river had a depth of just seven feet. The project called for parallel piers at the mouth of the river to confine the flow of the river and for dredging a channel between the piers to the depth of twelve feet. The work was completed in 1889, and up to 1908, the total cost of the improvements came to $377,296, which was one-half of one percent of the value of the commerce shipped and received at the harbor during that period.

While work on the federal improvements was underway, a light was placed about 200 feet from the outer end of the west pier and lighted for the first time on September 20, 1875. As the pier was extended, the light was moved lakeward, first by 535 feet in 1879, then by 865 feet in 1884, at which time a 767-foot-long elevated walkway was also built atop the pier.

Responsibility for the pierhead beacon was given to the keeper of Ontonagon Lighthouse, which had been established on the west side of the rivers mouth in 1853. In 1889, an iron gallery was placed around the pierhead light to enable the keeper to clean the lantern room glass, and four ventilators were made in the lanterns parapet.

On September 30, 1893, the tower was moved roughly 400 feet toward the outer end of the pier, and the elevated walkway was extended to it. In this position, the tower was exposed to the full fury of Lake Superior, and on December 12, 1899, it was washed away in a storm. The following account of the towers destruction and the erection of a temporary and then permanent light are from the Annual Report of the Lighthouse Board:

On December 12, 1899, the open framework tower at the outer end of the west pier was carried away during a severe storm. The construction of an iron beacon is well advanced. A temporary wooden structure, consisting of a square house, painted brown, with a square lantern, was erected on the site of the tower that was carried away, for the exhibition of a temporary fixed red lantern light. The temporary light was shown on the night of April 16, 1900. The material required for rebuilding the elevated walk and constructing a watch room in the new iron beacon was purchased and delivered at the Detroit light-house depot.

The iron beacon was completed and was delivered on July 31, 1900, at the Detroit light-house depot. The beacon is a square, pyramidal frame of steel, 26 feet 10 inches high to the focal plane. It is surmounted by a lantern deck and lantern of cast iron. The tower is erected on the outer end of the west pier, and is provided with a watch room. The fixed red light of the fourth order was shown on November 10, 1900. Some 70 feet of new walk was laid. Various repairs were made.

The square iron tower stands thirty-two feet, ten inches tall, from its base to the ventilator ball atop its octagonal lantern room, and its service room could be accessed from the elevated walkway through a wooden door.

When James Corgan was serving as keeper of the main and pierhead light in 1910, he could reach the pierhead tower by following a 750-foot-long boardwalk from the main lighthouse to the pier, walking 600 feet on the pier, and then taking the 1,200-foot-long elevated walkway to the tower.

Keeper Corgan wore many hats in the community including, at various times, harbor master, deputy collector of customs, government appraiser, coroner, vice-president of the Ontonagon Business Mens Association, and President of Village. In this latter capacity, Corgan was asked to respond to the Corps of Engineers, who in 1909 were trying to determine what type of harbor maintenance, if any, was justified at Ontonagon. At that time, lumber made up eighty-three percent of the tonnage shipped from the harbor, and there was more than a billion feet of standing timber tributary to Ontonagon harbor.

The following was part of the reply James Corgan sent to the Corps of Engineers:

The village, county, corporation, or individuals, if given a chance, will demonstrate they are ready and willing to do anything in the line of reason for the development and advancement of our harbor. We sorely need a harbor, and when we can be assured of it we know the one obstacle to our advancement will be removed, and I feel sanguine in saying it will not be long ere the returns will show commerce sufficiently multiplied to have warranted the outlay.

The smaller of two proposed harbor maintenance options was recommended in order to promote further development of the area and not abandon the already large investment made in the harbor.

The main Ontonagon Lighthouse was discontinued in 1963 after a battery-operated light was installed on the east pier. An electric siren had been established in the iron tower on the west pier in 1933, replacing a Lottrops hand fog signal that had previously been used. A solar-powered LED light was installed in the pierhead tower in 2013, replacing a plastic beacon that had earlier taken the place of a fourth-order Fresnel lens.

On May 15, 2012, Ontonagon Harbor West Breakwater Lighthouse was made available under the National Historic Lighthouse Preservation Act of 2000 to eligible federal, state, and local agencies, non-profit corporations, educational agencies, and community development organizations to be used for educational, recreational, cultural, or historic preservation purposes. Interested entities were given two months to submit a letter of interest expressing their desire to submit an application for ownership. Ontonagon County Historical Society submitted an application for the pierhead tower and was recommended as the new owner, but the actual transfer never occurred. The society must have had second thoughts, as the General Services Administration initiated a public auction for the lighthouse on June 20, 2019, with a starting bid of $5,000. Only two bidders participated in the auction, which ended on September 17 with a high bid of $7,500.

For a larger map of Ontonagon West Pierhead Lighthouse, click the lighthouse in the above map.

Ontonagon West Pierhead Lighthouse can be viewed from Ontonagon Lighthouse or from the beach on the eastern side of Ontonagon River.