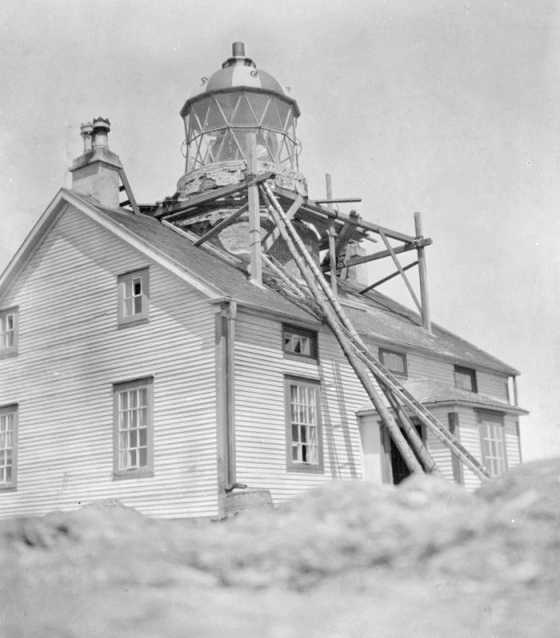 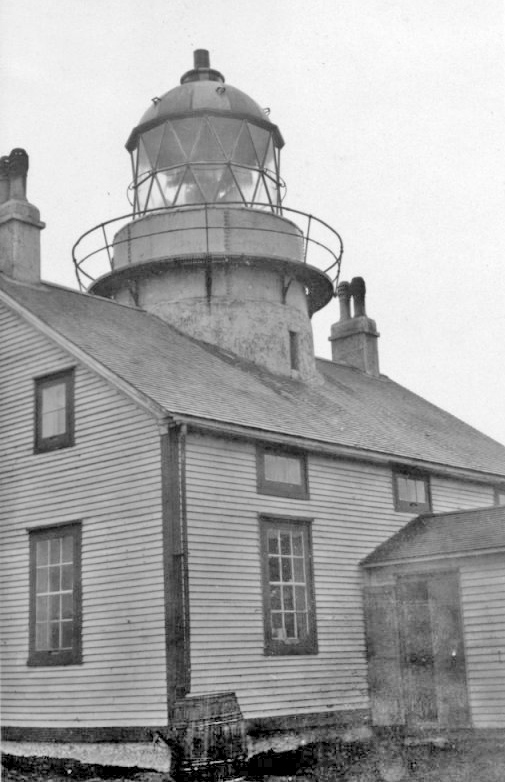 The Burin Peninsula extends to the southwest from the main island of Newfoundland, with Placentia Bay to its east and Fortune Bay to the west. Locals often refer to their peninsula as The Boot, due to is boot-like shape. The town of Burin, which was first settled in the early 1700s as a fishing community, is located near the heel of the boot, and Burin Island is situated just offshore, near the entrance to the harbour.

In 1856, a petition from Thomas Burfett and other residents of Burin that called for a lighthouse at Dodding Head on Burin Island was presented and read before the House of Assembly of Newfoundland. A committee looking into the lighting of the coasts of Newfoundland recommended that a lighthouse be built at Green Island at the entrance to the habour of Catalina in 1856, then one on Offer Wadham Island in 1857, and finally one on Burin Island in 1858. Funds for constructing these lighthouses were extracted from vessels that benefited from them in the form of light dues collected at ports throughout Newfoundland.

On May 20, 1857, Inspector Robert Oke, a former keeper at Harbour Grace Islands Lighthouse, selected a site on Dodding Head for the lighthouse. While Alexander Smith, a stonemason, and William Campbell, a builder, were busy working on the lighthouse at Offer Wadham Island that year, a road was constructed on Burin Island so the building materials could be hauled to the selected site. Smith and Campbell finished the lighthouse on Dodding head on December 10, 1857, and, after the lantern and lighting apparatus had been received from David and Thomas Stevenson of Edinburgh, Scotland, Inspector Oke departed St. Johns with them aboard the schooner Alice on May 8, the following spring. Inclement weather coupled with difficulty in conveying the cargo to the lighthouse and finding labourers prevented the lighthouse from being finished until June 12.

As he knew the delicate revolving light would require much care and experience on the part of its keepers, Inspector Oke recommended that the assistant keeper from Cape Spear be sent to Dodding Head for a few months to train Martin Sparrow, the first head keeper, while the assistant keeper destined for Dodding Head learned the care of a revolving light under the tutelage of Keeper James Cantwell at Cape Spear.

An almanac provided information on the new light at Dodding Head:

This Light was put in requisition on the 3rd August, 1858, and is exhibited every night from sun-set to sun-rise. It is revolving, cato-dioptirc, of the second order, producing a brilliant White Light every minute, with intermediate flashes at intervals of twenty seconds, burning at an elevation of 410 feet above the level of the sea, and in favourable weather can be seen 30 miles.

Dodding Head Lighthouse consisted of a circular brick tower surrounded by a one-and-a-half-storey frame keepers dwelling. In 1869, some 500 defective bricks in the tower had to be extracted, and their replacements pointed and coated with cement.

In 1865, Austin Oke, son of Inspector Oke, transferred from Harbour Grace Islands Lighthouse to Dodding Head Lighthouse. Austin would serve on Burin Island for three years before returning to Harbour Grace Islands and serving another decade as keeper there. Austin Oke would later serve as the mechanician for the lighthouses of Newfoundland until he died in 1887 while trying to land at Ireland Island Lighthouse. Austin Oke Sheppard, grandson of Robert Oke, replaced his uncle Austin as keeper at Dodding Head. Austin Sheppard started his light keeping career as an assistant to his father at Fort Amherst at the age of sixteen, and then served as head keeper at Green Island for a year or so before taking charge at Dodding Head. In 1880, Austin Sheppard was transferred to Cape Spear, and then in 1887 to Fort Amherst, his childhood home, where he would serve until 1924.

In 1874, Austin Oke visited Dodding Head in his capacity as mechanician of lighthouses and fitted a new fly shaft and pinion wheel in the machinery that revolved the light. He noted that the joisting that supported the light room floor were getting rotten. These were replaced by iron ones the following year, thus effecting a great and permanent improvement. In 1875, the keepers built a large new porch for the lighthouse, and the following year, they replaced the houses rotten sills.

In 1887 and 1888, repairs were made to the tower by cutting out perished freestone and placing bricks in cement in place of it and by recementing the brickwork of the tower. A dormer window was also put in the roof to provide more light and headroom for the tower stairs. The hilly road, that ran from Crosses Cove to the lighthouse, was often washed out by rainstorms and needed frequent repairs.

The inspectors annual report on the lighthouse for 1894 noted: the light on Dodding Head is to a great extent useless, it being capped with fog for weeks at a time when the lower parts of the coast are clear, and consequently it is a comparative stranger to navigators. But for the obvious disadvantage of doing away with a long established light, I should recommend its discontinuance and simpler stations provided on Shalloway and Pardy Islands, as being more necessary and urgently needed for approaching Burin safely. Despite this pronouncement, the light remained active for many more years.

For a larger map of Dodding Head Lighthouse, click the lighthouse in the above map.

The modern light can be seen on Burin Island.