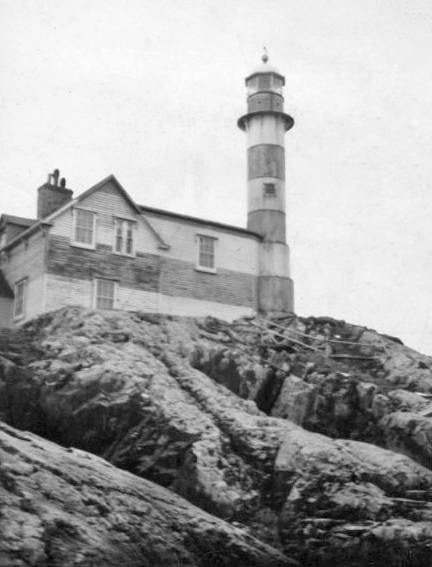 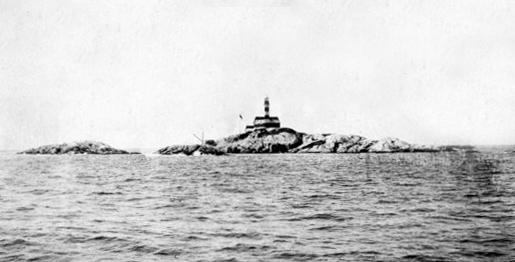 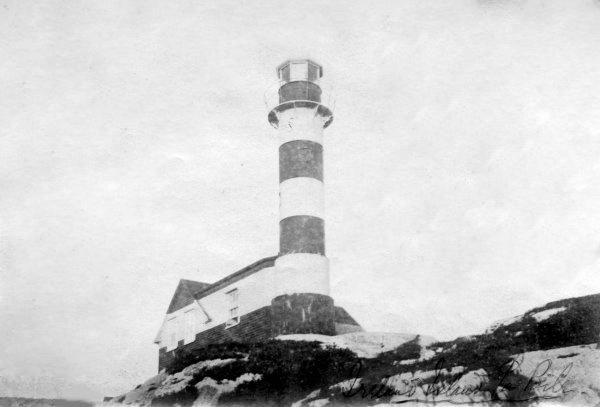 Ireland Island is a small island situated at the entrance to La Poile Bay. La Poile, the only settlement on La Poile Bay, is inaccessible by road but can be reached by a ninety-minute ride on a passenger ferry from Rose Blanche.

A square, wooden building, painted white with three black bands, was built on Ireland Island in 1875 to serve as a daymark. The building was seventy-five feet high and supported by four chains. In 1882, Ireland Island, which was known then as Irelands Eye, was inspected as a site for an active navigational aid. A light or fog alarm was recommended as a guide to the entrance of La Poile Bay: The island, though small, is a very suitable one for a station. From the prevailing fogginess of the weather in the locality, it seems that Phonic Signal would be far more useful than a light. It can be put up for about the same money, but the annual expense would be greater.

A plan to erect an iron light tower and a wooden keepers dwelling on Ireland was finally approved in 1885, and work on the island began that year. The following description of the new lighthouse, which commenced operation in 1886, was published in The Nautical Magazine:

Exhibited from a lighthouse erected on Ireland Island, eastern side of entrance to La Poile Bay. It is a flashing white light, showing alternate flashes and total eclipses, and attaining its greatest brilliancy every twelve seconds. Elevated 67 feet about high water and visible 9 miles. Illuminating apparatus dioptric, or by lenses of the fifth order. The lighthouse, 39 feet high, is constructed of iron and circular in shape; the keepers dwelling is distant 16 feet from the tower in a W.S.W. direction; both buildings are painted red and white in horizontal bands.

Austin Oke was appointed the mechanician for the lighthouses in Newfoundland, after having served as keeper of Harbour Grace Islands Lighthouse for several years. While he was keeper, the light at Harbour Grace Islands was changed from a fixed light to a revolving light that produced red and white flashes, so he was well versed in maintaining fickle lighting equipment. Austin Oke had overseen the construction of several lighthouses in Newfoundland, and in June 1887, he headed out to resolve issues with the lighting apparatus on Ireland Island. Tragically, while trying to land on the island, Austin Oke and another man in the boat drowned. Strong winds had been blowing for a week before the visit to the island and produced heavy seas that led to the disaster. Austin Okes death was noted that year in the annual report of the lighthouse inspector:

It is a melancholy conclusion to my frequent, almost annual notices of praises, to have to pay a tribute to the memory of the late Austin Oke, Mechanician to the Department. For its nature, his death was tragically sudden. The upsetting of a boat on June 6th in the locality of Irelands Island, a place he had to visit on duty, deprived the light-houses of the valuable services of one who had spent almost a lifetime among them, and whose natural fitness made him most valuable.

A newspaper reporting the incident mentioned that Austin Oke left a wife and five children to mourn their sad loss.

In 1888, a brick tank was built on the Ireland Island to catch rainwater from the dwellings roof. The keeper had previously tried to collect water from rocks on the island, but the water was often brackish due to saltwater spray.

James Simms replaced W. Hickman, the lights first keeper, in 1892, and two years later, the inspector noted: The improved appearance of this station under the care and attention of the present keeper is very gratifying. Keeper Simms served until 1907, and then Francis Reed took charge of the station. Keeper Reed was born in La Poile in 1880, and in 1921, as noted in the census for that year, he was living on Ireland Island with his wife and three children.

The 1935 and 1945 census show that Henry Chant served as keeper of Ireland Island Lighthouse and lived on the island with his wife Lily and seven children. Calvin was one of the children and remembers that he and his siblings were not allowed to play outside during the winter. Due to freezing spray, the rocky island was almost constantly coated with ice during the winter so Lily Chant decided she couldnt chance letting her children outdoors in winter.

The circular iron tower remained on the island and was tended by a keeper through at least 1955. In 2021, a square, skeletal tower, with a red-and-white rectangular daymark, was exhibiting a flashing white light with a period of six seconds on the island.

For a larger map of Ireland Island Lighthouse, click the lighthouse in the above map.

The modern light can be seen from the ferry that serves La Poile.