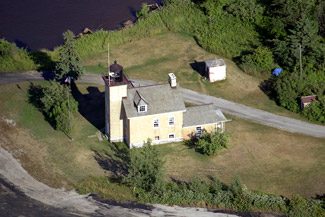 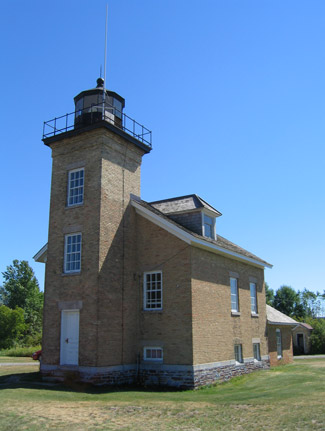 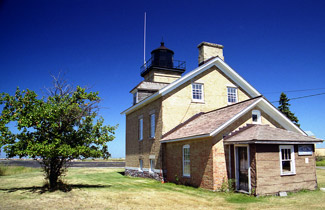 The Ontonagon Boulder, a large chunk of copper originally situated in the west branch of the Ontonagon River, has played an important role in the development of the area. The Ojibwa considered the curious rock a Manitou or mediator between them and the Great Spirit and reportedly even performed a human sacrifice on it. French missionaries were aware of the rock in the 1600s, and an English fur trader started a failed mining operation near it in 1771.

After hearing about the mass of copper, Julius Eldred, a wealthy hardware merchant in Detroit, outfitted an expedition and traveled to Lake Superior to purchase the rock. Eldred paid the chief of the Ontonagon Ojibwa Band $150 for the boulder in 1840, but when he returned to claim it two years later, he found it in the possession of James Paul. After buying it a second time, at the much steeper price of $1,365, Eldred transported the copper mass to Detroit, where he planned to charge people twenty-five cents for a peek at the rock. In 1847, the federal government claimed the noteworthy specimen, paid Eldred $5,655 for his troubles, and removed it to Washington D.C., where it remains in the collection of the Smithsonian Institution.

James Paul, the man from whom Eldred repurchased the copper rock, became the first settler of Ontonagon in 1843, when he opened the Deadfall Saloon at the mouth of the river. In 1847, prospectors discovered a six-ton mass of copper in a pit dug by Native Americans a few miles inland, and the resulting Minesota Mine became the most productive copper mine of the time in the United States. At the height of the copper boom, Ontonagon had a population of 6,000, which is more than triple the number of residents it had in the 2010 census.

Congress appropriated $5,000 for Ontonagon Lighthouse on September 28, 1850, and W.F. Chittenden, a Detroit contractor, was hired to build it on a 22.63-acre parcel on the west side of the entrance to the Ontonagon River that had been acquired in April 1847. The original Ontonagon Lighthouse consisted of a one-and-a-half-story stone dwelling, measuring thirty-eight by twenty feet, which was topped by a short tower. An array of six lamps set in fourteen-inch reflectors was used to produce a fixed white light at a height of thirty-five feet above the lake, until a fifth-order Fresnel lens was installed in the tower in 1857. Samuel Peck was appointed the lights first keeper on August 26, 1853.

Like all the other early lighthouses built on Lake Superior, the first Ontonagon Lighthouse had a short life. Congress appropriated $14,000 on April 7, 1866 for repairs and renovations at Ontonagon light-station, but during that year an entirely new schoolhouse style lighthouse was built, consisting of a nine-foot-square tower centered in the lake-facing gable of a one-and-a-half-story brick dwelling. The fifth-order Fresnel lens from the original lighthouse was transferred to the new decagonal lantern room, where it was mounted atop a cast-iron pedestal.

The 1888 Annual Report of the Lighthouse Board noted the following improvements to the station: A frame wood shed, 12 feet by 20 feet in plan, was built near the dwelling. A brick cistern, with a capacity of 338 gallons, to supply water for domestic purposes, was built in the rear of the dwelling. A wagon road was made from the station to the nearest public road, and materials were furnished for the construction of a root-house. Two years later, an eighteen-foot-square kitchen was attached to the rear of the dwelling. A brick oil house, with a capacity of 360 gallons, was built in 1902, and the water pipe connecting the dwelling to a pump was lowered twenty inches that same year to prevent it from freezing. In 1904, dormers were added to the lighthouse to provide light and additional space in the upper story.

James Corgan began his lightkeeping career in 1866 on Manitou Island, where he served as an assistant under his father and then replaced him as head keeper in 1873. After a two-year break from lighthouse keeping, Corgan served as head keeper at Gull Rock Lighthouse from 1877 until 1883, when he was transferred to Ontonagon Lighthouse. Keeper Corgan was in charge of Ontonagon Lighthouse for thirty-seven years, longer than any other keeper, and was seventy-one when he retired in 1919. A 1916 newspaper article noted that Corgan was the oldest lighthouse keeper in the employ of Uncle Sam and held five offices at the time: lighthouse keeper, harbor master, deputy collector of customs, government appraiser, and coroner. Besides his professional duties, Corgan was also busy at home, being the father of at least ten children.

Keeper Corgan kept a detailed logbook that documents much of his service, including his arrival at the station on October 27, 1883:

Landed at light house at 9:45am having been transferred from Gull Rock Lt Station off Kewernaw point to this station by Lt House Inspector, J. C. Matson. Left Gull Rock on 23rd at 4pm where I left my brother Henry in charge there being no appointment made to relieve me. Took my family and effects on board my own tug the May E Corgan and came to Copper Harbor where I remained to close up my affairs until the 26 at 6pm when I again had a pleasant run and arrived here as above stated with my wife six children and Dan Corgan my brother. Informed Mr. Thomas Stripe the present keeper of my orders to relieve him - he commenced moving out immediately to the town across the river.

By the time Corgan began his service at Ontonagon, lumber had surpassed copper as the main natural resource driving the areas economy, and the Diamond Match Company operated two sawmills in town. Keeper Corgans log entry for August 25, 1896 documents the destructive fire that all but destroyed Ontonagon:

Fire in the swamp S of station approached the dwellings of the Diamond Match Co employees & at 1:20 p. ignited them. Immediately thereafter the large sawmill S.E. of station a few hundred feet distant caught fire also the lumber piles & at 2 p.m the town was ablaze. At 4:20 p.m the wind verried to N.W with a few drops of mocking rain & drove the fire up the Greenland & Rockland roads to complete the devastation. . . . The Consort City of Straights arrived 5 am for lumber and was burned at the dock with 50 000M aboard The steam barge Huron City got away from the lumber docks in safety & lay by the E pier during the fire & fed & sheltered the refugees thereafter.

It was only through the efforts of Keeper Corgan and his family that the lighthouse was saved:

During the fire at times the heat was so intense we could not obtain water from the river E of the station. It required the utmost exertion of my wife, son Harry, hired girl & myself to carry water & keep the roofs & buildings wet down to prevent igniting. I burning my feet in the hot sand where we had extinguished fire.

The fire was fanned by a brisk wind, which propelled the flames across the river. The following account of the fires spread was published in the Ontonagon Herald on September 5, 1896: When the lumber piles took fire, burning boards were hurled through the air and slapped up against the sides of buildings, where they were held by the wind till the building was ignited. The town was afire in 100 places at once and nothing could save it.

Arnold Huuki, the last of the nine keepers of Ontonagon Lighthouse, retired on January 1, 1964, when the light was discontinued. Just over a month earlier, Keeper Huuki had been presented a diamond pin for forty years of efficient and faithful government service. Arnold and Lillian Huuki continued to live in the lighthouse after it was discontinued, but the property was eventually turned over to the U.S. Army Corps of Engineers, who were dredging the river. For a number of years, the lighthouse served as a clubhouse for the local coast guard auxiliary.

In 1994, the Corps of Engineers offered to lease the lighthouse to Ontonagon, but the towns Downtown Development Authority said that if they couldnt move the lighthouse, they didnt want it as in its present location, surrounded by coal piles, the lighthouse would be a massive liability. As the lighthouse had been placed on the National Register of Historic Places in 1975, moving it was out of the question, and a limited use permit was eventually granted to the Ontonagon County Historical Society.

A patent officially conveying the lighthouse to the historical society was issued on August 6, 2003, after an act passed by Congress and signed by President Clinton in 2000 authorized the transfer. In 2008 and 2009, a total of over $100,000 was spent restoring the lighthouse. New hardwood floors, subfloor heating, and wooden shutters were installed as part of an effort to return the lighthouse to its circa 1915 appearance. The fifth-order lens, formerly used in the lighthouse, can be seen at the society's museum.

A devastating blow was dealt to Ontonagons struggling economy when the paper mill owned by Smurfit-Stone closed its doors in 2009 and laid off 200 employees. The mill, which surrounds the lighthouse, was sold for scrap to a Canadian salvage company. While this might help improve access to the lighthouse, it is also problematic as the mill had been providing power to the lighthouse before it closed. A diesel generator was installed at the lighthouse to provide electricity until a permanent solution is worked out.

For a larger map of Ontonagon Lighthouse, click the lighthouse in the above map.

Ontonagon Lighthouse, which was formerly surrounded by a pulp mill, can currently only be visited on escorted tours offered by Ontonagon County Historical Society. Tours originate at the historical society's museum at 422 River Street. Tours are also available by appointment during the off-season and can be arranged by calling the museum at (906) 884-6165. The fifth-order Fresnel lens, formerly used in the lighthouse, can be seen in the museum. A distant view of the lighthouse is possible from the end of River Street.

The lighthouse is owned by Ontonagon County Historical Society. Grounds/dwelling/tower open during tours.