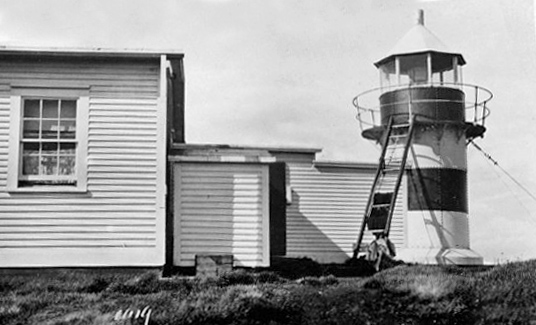 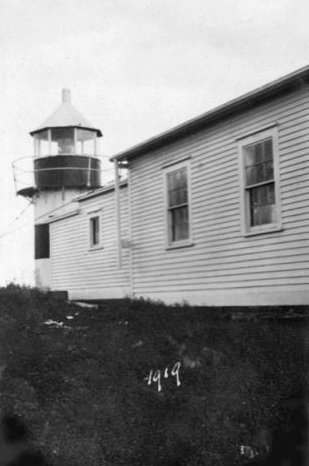 The Ragged Islands are a collection of tightly grouped and fractured islets situated off the eastern end of Random Island in Trinity Bay. In 1910, a Notice to Mariners announced the establishment of a new lighthouse on the islands:

Notice is hereby given that on or about August 1st 1910, a Fixed Red Light will be exhibited from a circular iron tower erected on Ragged Island.

The light is dioptric of the 4th order, elevation 118 feet from sea level to focal plane. It should be visible in all directions at a distance of 14 miles.

The tower is 18 feet high from base to top of lantern.

A dwelling house and store are erected at a short distance North Westerly from the tower.

The tower is painted [with] Red and White horizontal bands, two each. Drum and lantern White. House connected to tower by covered passage way, and Store White.

This light will be maintained annually during the period of open navigation.

Leonder Gardner made the first seven entries in the stations logbook, but James Toope III was the keeper in 1911. James Toope III served until 1927, when his son James Toope IV took responsibility for the light. He served until the light was automated through the installation of an acetylene lighting apparatus in 1931. With this change, the characteristic of the light was changed from fixed red to a flashing white light with a period of four seconds.

James Toope IV continued to serve as a caretaker of the automated light until 1955, when his grandson Charles Toope assumed the responsibility for the light. From 1984 to 1998, Cyril Toope was responsible for the light, and he would occasionally boat out to the island and climb to the light to swap batteries and check on the light. His job ended in 1998 when a solar-powered light was installed on the Ragged Islands.

Josephine Johnson has wrritten a book entitled The Flower that Bloomed on Ragged Island that chronicles the life of Hattie Toope on the Ragged Islands, where, for many years, she was the only female at the lighthouse. Josephines husband is the grandson of Hattie Toope.

For a larger map of Ragged Islands Lighthouse, click the lighthouse in the above map.

A distant veiw of the Ragged Islands can be had from New Bonaventure.