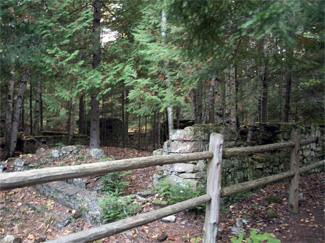 When sailing from the east, mariners have two options for reaching the Straits of Mackinac: the North Channel, between Mackinac Island and Round Island, or the South Channel, which passes between the southern side of Bois Blanc Island and the mainland. On September 28, 1850, Congress appropriated $4,000 for a lighthouse on the point of land about three miles east of Cheboygan River and opposite the southern tip of Bois Blanc Island to guide vessels through the South Channel. After construction of the lighthouse, the point, which helps form Duncan Bay, was known as Lighthouse Point. Alexander McLeod and J.W. Duncan built a sawmill on the southern shore of Duncan Bay, which is also known as McLeod Bay, and established the community of Duncan. Duncan served as the first county seat and thanks to the lumber industry was one of the busiest towns on the Great Lakes. In the 1880s, the federal government dredged the Cheboygan River, and Cheboygan started to surpass Duncan in importance. Today, Duncan no longer exists, while Cheboygan serves as the county seat.

Rhodes and Warner of Ohio were contracted to build Cheboygan Lighthouse on the peninsula separating Duncan Bay and Lake Huron under the superintendence of Captain Shook of the U.S. Engineers. During the summer of 1851, a thirty-three-foot-tall brick tower, which tapered from a diameter of eight feet, two inches at its base to six feet, four inches at its lantern room, was erected. Wooden stairs led up the tower to an octagonal, cast-iron lantern, where five lamps, set in fifteen-inch reflectors, were used to produce a fixed white light. A six-room, one-and-a-half-story dwelling, measuring thirty-four by twenty feet, was built nearby, and William Drew moved into it as the first keeper.

In 1856, the tower was equipped with a fifth-order Fresnel lens that produced a fixed white light varied every ninety seconds by a white flash. The site for the lighthouse was evidently poorly chosen as in 1859 the lake was threatening the tower, prompting a new lighthouse to be constructed farther from the shore.

During 1859, the same set of plans were used to build new lighthouses at Tail Point, Wisconsin and at Cheboygan, Kalamazoo, and St. Joseph in Michigan. These lighthouses, often referred to as a schoolhouse style, consisted of a two-story dwelling with a square tower perched atop one end of its gable roof. The fifth-order Fresnel lens was transferred to the new lighthouse and placed in operation before the close of the 1859 navigation season.

It wasnt long before the new lighthouse was suffering the same problem that doomed its predecessor. In its 1867 annual report, the Lighthouse Board noted that Cheboygan Lighthouse was being undermined by the action of the sea. The foundation of the lighthouse was repaired and the remains of the previous structures were used to pave around it so the surrounding sand would remain in place.

In 1870, the Lighthouse Board requested $33,000 for a more powerful light at Cheboygan using the following argument:

This is one of the most important stations on the lakes, marking, as it does, the turning point between Lake Huron and the south channel of the straits, the one almost exclusively used by sailing vessels and steamers plying between Lake Michigan and the lower lakes. The present light being a fifth-order, (fixed, varied by flashes,) shown at an elevation of only 37 feet, should be replaced by one of the third-order, with an elevation of at least 80 feet above lake level.

When no money was provided for a new lighthouse, the Lighthouse Board changed its request a decade later, when it asked for just $5,000 in 1880 to upgrade the lens to a third-order and keep the lighthouse as it was. After repeating this request in 1881 and 1882, the Board abandoned the plan, and Cheboygan Lighthouse retained its fifth-order Fresnel for the rest of its days.

Cheboygan Lighthouse did receive some upgrades in 1884, when twenty-three solid window shutters were hung, a lightning conductor was attached to its tower, and a brick-lined well was built. The cellar was lined with brick in 1887 to keep out frost and connected to the dwelling with an inside stairway.

In 1889, the stations boat house was moved from McLeod Bay to a location on Lake Huron in front of the lighthouse, and a cistern was placed in the dwellings cellar with a pipe linking it to a pump in the kitchen. Also that year, a circular iron oil house, capable of storing 225 gallons, was erected on a concrete foundation.

Using funds provided by an act passed on March 2, 1889, a fog signal building, measuring forty by twenty-two-and-a-half feet was built roughly 200 feet northeast of the lighthouse. The building was covered with corrugated iron, lined with sheet iron, and painted mineral brown. A ten-inch steam whistle, which sounded a five-second blast every thirty seconds, was placed in operation on June 2, 1890. Frank J. Louisignau was appointed the stations first assistant keeper in 1891 to help with the added workload created by the fog signal.

The steam whistle was usually in operation around 200 hours each year, but in 1896, it sounded for 509 hours while consuming 39 tons of coal. Water for the steam fog signal was taken from the lake through a one-and-a-quarter-inch iron pipe that ran along the boat landing. In 1900, a forty-foot-tall, brick smokestack replaced the iron stacks formerly used in the fog signal building.

At the opening of navigation in 1930, Fourteen Foot Shoal Lighthouse, located just a mile or so off Lighthouse Point, was placed in operation and Cheboygan Lighthouse was discontinued. Congress passed a bill on March 4, 1930 transferring the no-longer-needed forty-one-acre lighthouse reservation to the State of Michigan for park purposes.

George Kling, son of Fred Kling, the last keeper of the lighthouse, purchased the stations boathouse for $1 and moved it to his home in Cheboygan to serve as a garage. Bill Singer acquired the lighthouse and sold its materials to Bert Toles, who used them to build three small houses. The site of the 1859 lighthouse is now part of Cheboygan State Park, which offers campsites, cabins, a picnic area, a beach, and a rich system of hiking trails. Green Trail leads to the ruins of the lighthouses stone foundation where there is interpretive signage. From the beach near the foundation, you can get a good view of Fourteen Foot Shoal Lighthouse, whose construction led to the demise of Cheboygan Lighthouse.

For a larger map of Cheboygan Lighthouse, click the lighthouse in the above map.

From the Cheboygan River in Cheboygan, proceed east on Highway 23 for 3.7 miles to Cheboygan State Park. Turn left onto Seffren Road and follow it to the park office at the campground. From here there are various well-marked trails which lead to the lighthouse ruins. We received a trail map and much needed bug spray from the park ranger. The length of the hike is just over a mile.

The site is owned by the Michigan Department of Natural Resources and managed by Cheboygan State Park. Grounds open.