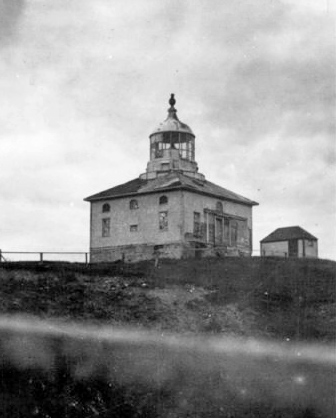 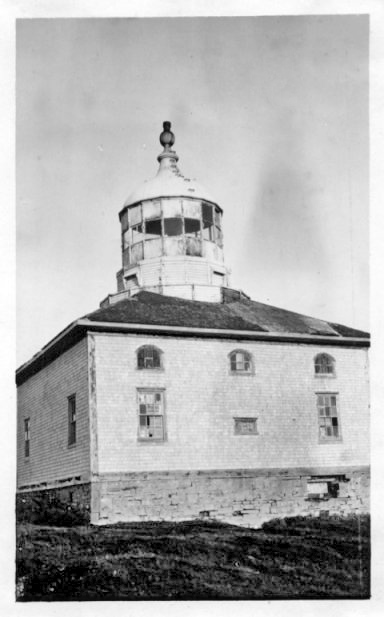 Conception Bay is an indentation on the northeast side of the Avalon Peninsula whose entrance is bounded on the south by Cape Francis and on the north by Split Point. Two of the settlements on the western side of Conception Bay are Harbour Grace and Carbonear. In 1835, a petition by inhabitants of Carbonear and Harbour Grace, many of whom were owners and masters of vessels, was presented before the House of Assembly of Newfoundland calling for a lighthouse on Harbour Grace Islands, as a light there would greatly add to the security of navigation in Conception Bay, and probably be the means of saving many valuable lives and large property in time to come.

The sum of 1,000 pounds sterling was allocated for a lighthouse on Harbour Grace Islands in 1835, and five commissioners were appointed to superintend its construction. To pay for the project, a duty was imposed on all vessels entering any port in the bay. After another 1,500 pounds had been provided, the lighthouse was placed in operation on November 21, 1837 with Robert Oke as its first keeper. Harbour Grace Islands Lighthouse was the third lighthouse to be built in Newfoundland after the ones at Fort Amherst and Cape Spear. Harbour Grace Islands Lighthouse, like the one at Cape Spear, consisted of a square, frame, two-storey dwelling with a lantern room centered atop its hipped roof.

Robert Oke settled in Harbour Grace around 1819 and had worked as a packet boat captain and custom duties, so he was well acquainted with the waters of Conception Bay. He would serve as keeper of Harbour Grace Islands Lighthouse for over a decade, before a short illness forced him to resign. His son Austin became the next keeper on the island, and Robert Oke moved to St. Johns. Robert Okes association with lighthouses was not over as by 1848 he was serving as inspector for the lighthouses of Newfoundland. Oke would serve as inspector until 1870, overseeing the staffing, maintenance, and construction of lighthouses. Lighthouses built during his tenure include the one on Green Island at the entrance to Catalina Harbour, Offer Wadham Island Lighthouse, Baccalieu Island Lighthouse, and Cape St. Marys Lighthouse.

Edward Oke served as keeper until February 1862, when he and assistant keeper Nathaniel Snow died after falling through the ice while trying to reach the island in February 1862. Austin Oke, Edwards brother, became the next keeper of the light, and would later serve as the mechanician for Newfoundland lighthouses. Austin Oke drowned in 1887 while rowing out to the newly erected lighthouse on Ireland Island.

In 1843, three more lamps and reflectors were added to those in the lantern room at Harbour Grace Islands so the light could be seen farther to the west. The original illuminating apparatus installed at Harbour Grace had been used in the lighthouse on Scotlands Isle of May from 1816 until a new light and refractor lens were installed there in 1836. With the addition made in 1843, the apparatus employed fifteen lamps and reflectors to produce a fixed light.

In 1864, Keeper Austin Oke reported that a considerable portion of the island had fallen away, seriously endangering the safety of the lighthouse. The margin between the lighthouse and the edge of the cliff had been reduce to just twelve feet. A new foundation for the dwelling was laid sixty-five feet away, and the building was relocated to this perfectly safe location.

In December 1869, the light at Harbour Grace Islands was changed from a fixed light to a flashing one through the installation of a revolving apparatus that had previously been used in Cape Pine Lighthouse. Before being installed on the island, the apparatus was sent to Messrs. Stevenson, noted lighthouse engineers in Scotland, for repairs and alterations. The new light at Harbour Grace Islanda had a signature of two white flashes followed by one red flash, with the flashes being separated by thirty seconds.

In May 1874, the latest in a series of slips in the rocks that made up Harbour Grace Islands occurred. The lighthouse was then within twenty-three feet of the northwest edge of the island, but as the rocks were overhanging, it appeared that part of the lighthouse was outside the base of the cliff. Inspector John T. Nevill noted: The Island is composed of a very rotten description of stone and full of fissures; its general character renders it a matter for grave consideration whether or not it is safe to use it longer as a Light House station.  The opinion the Light House Keepers have of the Island is such that they say, they do not care to remain there during another winter.

An Alexander Murray of the Geological Survey Office submitted a report on the condition of the island in June, 1875. Part of this report reads:

With the exception of a few outlying inaccessible rocks, the island upon which the Light House is erected is the most northerly of the group known as the Harbor Grace Islands. Its surface area amounts in all to a little over an acre and a half of flatish ground. At the highest part, which is close to the northern end, stands the Light House; the base of which is by my aneroid 114 feet above the level of the sea, but according to Mr. Oke, the keeper, 100 feet.

It is impossible to state positively how long a time the present building might remain securely in its present position; it might not receive any material damage in fifty years, and it might disappear altogether within a few months, or weeks, or even days. All that can be said with precisions is, a catastrophe is imminent, and the ultimate severance and final total disintegration of the island is inevitable, and simply a question of time.

Notwithstanding the threat to their lives, keepers faithfully remained on the island for several more years. Inspector Nevill noted in 1876 that the decrease in the size of the island due to the foundering over the previous two years was very apparent. The next year, he wrote, The rock of the Island continues to founder, the useful area getting smaller year by year. Nevill repeated this assessment the next two years, and then in 1880, added and, consequently, the position of the lighthouse less and less safe.

In 1883, the keepers sent a letter to Inspector Nevill informing him that a large quantity of rock had given way about halfway up the overhang beneath the lighthouse. If a slide like that takes place from the top, the keepers wrote, there wont be any more trouble with the house or them that is in it. Amazingly, keepers were still on the island a decade later. Keeper Nathaniel Sheppard submitted the following account of what occurred on November 1, 1893: [We] were sitting quietly by the fire when we were alarmed by a heavy founder of the cliff; it shook the house so that we thought it was all up with us. In the morning we discovered that it was opposite the N.E. end of the house, and a portion of the cliff is gone.

In 1894, a Trotter-Lingberg lighting apparatus, imported from England, was installed in the lighthouse to produce a self-acting occulting light. This allowed the keeper to live off the island and visit the light when landing was possible. A serious slip of the cliff in 1895 took away the flagstaff and left less than twenty feet of ground between the cliffs edge and the lighthouse. The revolving apparatus removed from Harbour Grace Islands in 1894 was later placed in Cape Bonavisita Lighthouse, where it can still be seen today.

In 1923, a square, pyramidal tower, that had an enclosed lower portion and a framework upper portion and was topped by a lantern, was constructed on the island to replace the historic lighthouse. A square, skeletal tower was displaying a flashing white light from the islands in 2020.

For a larger map of Harbour Grace Islands Lighthouse, click the lighthouse in the above map.

A distant view of the island is possible from Harbour Grace.