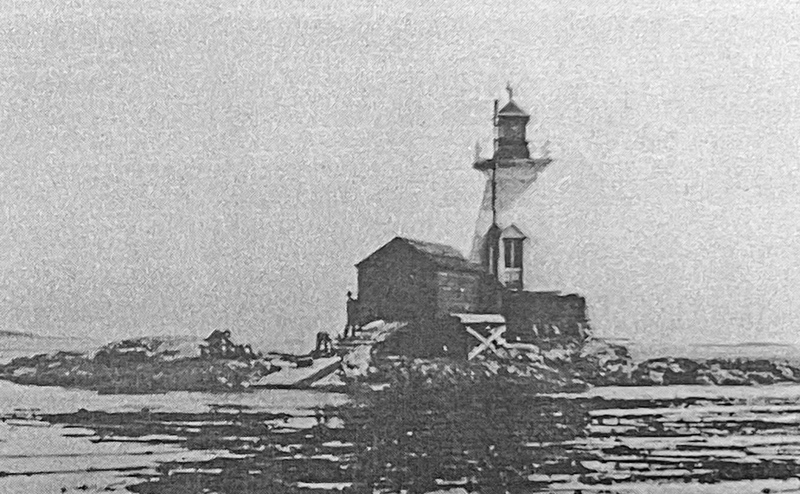 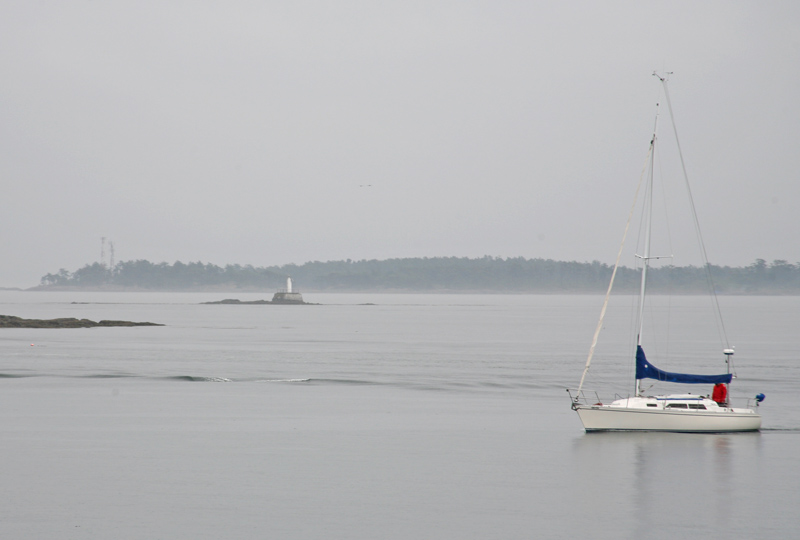 Mayor Channel passes through a collection of islands and reefs just east of Victoria. Rather than sail around the eastern end of Discovery Island, mariners can save some time by taking Mayor Chanel, though it is a bit crooked and passes through a collection of islets and reefs. Midway along the channel is its narrowest point with Fiddle Reef on the north and Lewis Reef on the south. Modern lights mark both of these hazards.

A description of the first light to mark Fiddle Reef is found in the Annual Report of the Department of Marine:

A lighthouse erected on Fiddle reef, Mayor channel, was put in operation on the 2nd December, 1898, replaced the day beacon formerly maintained on the reef.

The lighthouse is a square wooden tower with sloping sides, surmounted by a square wooden lantern, and is painted white. It stands upon a concrete pier 7 feet high. The height of the tower, from its base to the ventilator on the lantern, is 30 feet. The light is a fixed with 7th dioptric light, elevated 30 feet above high water mark.

The building was erected by days labour under the direct supervision of the agent, the concrete foundation having been built by the crew of the Quadra and the superstructure under the foremanship of Mr. John H. Port, of Victoria. The total expenditure in connection with its construction has been $1,571.26.

A heavy gale on January 20, 1899 destroyed the stations boathouse and boat. A new boathouse was erected at a cost of $123, and Keeper John Davies, the lights first keeper, was given a new boat. Red sectors were added to the previously fixed white light in 1899 to mark foul ground on the western side of the channel on approaching the light. Davies served until March 1903, when he quit due to failing eyesight and general breaking up. M.G. Douglas was hired as a replacement and told that he was at liberty to supplement his salary by...work onshore, but hed had enough of the cramped quarters after just two months. George M. Black, the next keeper, lasted for two years. His tenure ended when James Gaudin, the Marine Agent in Victoria, found the keeper intoxicated on the streets of the city. I used every effort to get him to go back to the lighthouse but I am sorry to say without avail, Gaudin reported.

Donald H. McNeill was fifty-one when he was hired as keeper of Fiddle Reef in 1905. In 1831, McNeills grandfather was the first captain to sail a ship into Victoria Harbour, and the McNeill family had assisted in rescuing men from a few shipwrecks in the area. Donald McNeill had lost two fingers on one of his hand in government service before his service as a lighthouse keeper. Some thought McNeill was too old for the position, but Gaudin rightly noted that all the previous keepers had been old men and that It would scarcely be practicable to obtain a young man to take charge of Fiddle Reef for the salary allowed to a lightkeeper of this station.

Keeper McNeill would serve twenty years on the reef, only retiring when forced to by a new law. During his time at Fiddle Reef, he received letters of gratitude for saving vessels and individuals. On the night of February 9, 1907, McNeill rowed out and prevented the wayward steamer Montara from running aground off the nearby Chain Islands. He shouted at the vessel to drop anchor, and then climbed aboard to point out their perilous position. The next morning, McNeill piloted the Montara out into the straits so it could resume its journey to Skagway. McNeills report of this incident made it to Ottawa, and the deputy minister of the Department of Marine sent the keeper this commendation: I hereby convey to you the thanks of the Department for the efficient service rendered by you to the officers and crew of the above-mentioned steamer, and assure you that your action is much appreciated at headquarters.

M. Buckley sent a letter to McNeill after being rescued by the ever-observant keeper:

I have to convey to you the united thanks of myself and sister for your much valued service rendered off Trial Island, when we were swept out in the Straits by a strong flood tide and westerly wind. We were unable to get back in our small skiff and you were the only person who rowed out and showed yourself able to get us back. I consider your conduct in this case deserved consideration from the Marine Department of Lighthouses, and I think you should be promoted to a better lighthouse.

Reginald Graham served as keeper at Fiddle Reef from 1925 until 1936. During the week of Christmas in 1932, a gale caused extensive damage at the station, prying the boathouse from its foundation and sweeping away the storehouse atop the water cistern. Automating the station was considered at this time, but the operators of steamships and tugs in the area insisted that a fog alarm be kept at the station. Without one, George McGregor, managing director of Victoria Tug Ltd., said he would be forced to route his towboats around Discovery Island, adding hours to the passage.

James Heanski was the final keeper of Fiddle Reef Lighthouse, serving from 1957 until the station was automated in September 1959. One November, he set off from Oak Bay to return to the reef in the station boat, which was loaded with supplies. By the time he reached Fiddle Reef, the wind was howling at 50 & 60 miles a hour. Heanski managed to secure the boat and scramble ashore, but as he lowered the hook from the winch to raise the boat out of the water, the cleat ripped of the bow of the boat. I watched it till it neared the Chatham Islands but it got quite dark and I lost track of it, Heanski reported. Boat, motor, groceries, oars, and life preservers were gone. Henaski survived his time at Fiddle Reef, but he perished four years later in a fire at Portlock Point Lighthouse.

The wooden boathouse was intentionally burned down in 1969, but the square, wooden lighthouse remained standing until 1978, when it was replaced by a modern, circular tower.

For a larger map of Fiddle Reef Lighthouse, click the lighthouse in the above map.

The modern light at Fiddle Reef can be seen from the shore at Oak Bay.