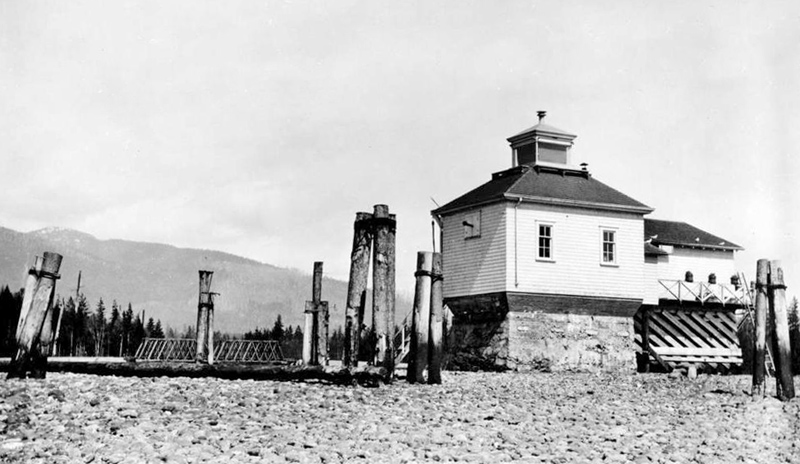 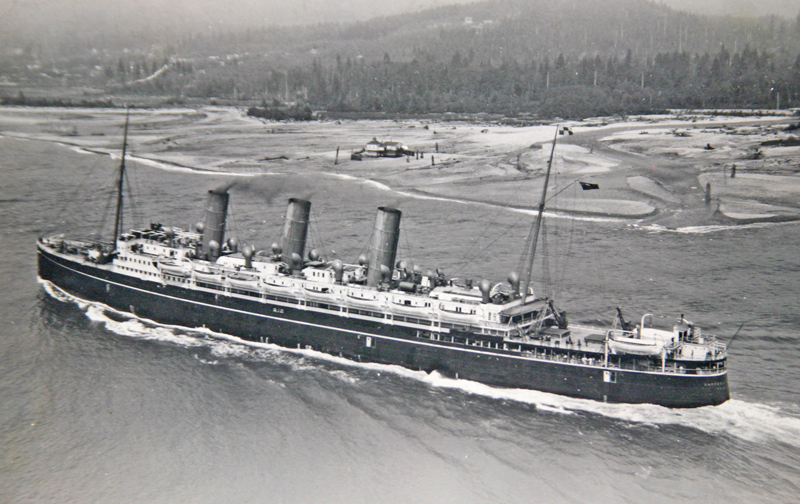 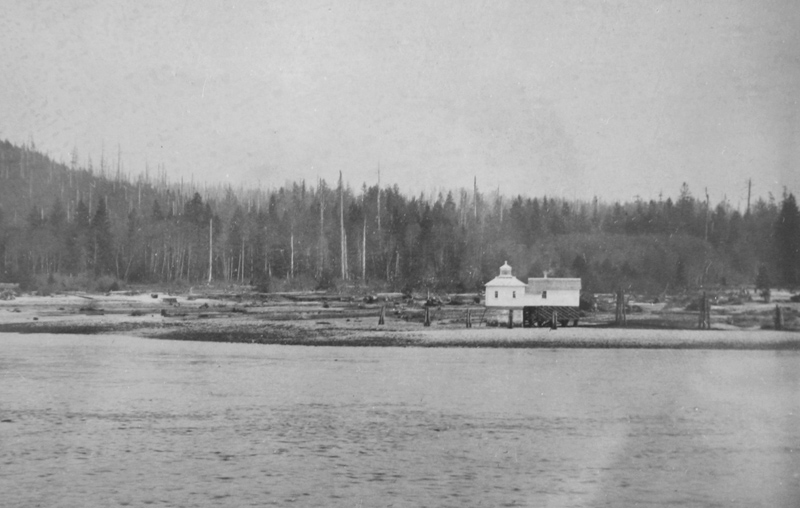 First Narrows is the name given to the entrance to Vancouver Harbour from Burrard Inlet. The entrance is bracketed on the south by Prospect Point, where a light was established in 1888, and on the north by the flats formed at the mouth of Capilano River. The width of the entrance to the busy harbour at Vancouver varies with the tide, which can rise and fall as much as sixteen feet. Many a vessel became stranded on the flats on the north side entrance when their captains failed to account for the fluctuation in the depth of the water.

In 1908, a gas-lighted beacon was established on the flats at First Narrows in the form of a red, steel, cylindrical tank, standing on steel framework and surmounted by a red, steel, pyramidal fame that supported a lantern. The acetylene light was unwatched until 1911, when Alex Rood was hired at an annual salary of $400 to row out and tend the light. Around this time, a fog bell was installed at the station necessitating more regular attention.

Preliminary work began in 1912 on the construction of a combined wooden lighthouse and fog alarm building atop a concrete foundation. This rectangular building had a hipped roof surmounted by a square lantern room housing a fifth-order lens. A small diaphone plant was installed in the building to replace the fog bell that had previously been used at the site. The light repeated the following pattern every thirty seconds: eighteen seconds on, three seconds off, six seconds on, three seconds eclipsed, while the fog alarm had this characteristic every thirty seconds: two-second blast, thirteen seconds of silence, two-second blast, thirteen seconds of silence.

The living accommodations for the resident keeper, a small rectangular dwelling, were built atop wooden pilings just east of and attached to the lighthouse. George A. Harris became the first keeper of the light and fog alarm in June 1913. In 1922, Keeper Harris declined a transfer and promotion to Entrance Island. I would not hesitate a moment in taking the position if I was a younger man, he wrote, but he was not enjoying the best of helath.  Although this has been a strenuous placeand has put a few years on my life, I still feel it is home and keep hoping conditions to change for the better round the buildings. Three years later, in March 1925, Keeper Harris died at the station. His wife Elizabeth took charge of the light and served for a few months until Alfred Dickenson was transferred from Kains Island.

Life at First Narrows was a big change for the Dickensons. At Kains Island, contact with civilization had been very limited, but now they were treated to a constant parade of vessels just outside their door. Keeper Dickenson was responsible for numerous rescues at the station including this one recorded in his log on August 17, 1930:

I rescued from the water about 100 feet SW of this station George C. Leighton and John McCormick, they being in a rowboat which was swamped by swell from SS Prince David throwing boat and occupants on shoal and the backwash drawing them in about 8 feet of water. Mr. McCormick was semiconscious when I drew him in my boat, he weighing about 200 lbs. it took me about 5 minutes to get him in, in the meantime Leighton had disappeared. I cruised around and found him about 2 foot below the surface, I was assisted then by 3 men in a dinghy in getting him into my boat. He groaned when dropped on the bottom of boat.

Keeper Dickenson laboured over Leighton until they got him to shore, but a doctor pronounced him dead an hour later.

The Dickensons had a front row seat in 1937  1938 as concrete was poured, towers were raised, and cables were stretched to create First Narrows Bridge, more commonly known now as Lions Gate Bridge. On November 12, 1938, Keeper Dickenson noted that the bridge had opened that day to pedestrian traffic.

Earthquakes and a temperamental fog signal combined to make life less than idyllic at the station. On at least five occasions during their time at the station, earthquakes shook their house built on stilts. On January 30 ,1942, multiple shocks struck the station, each lasting about half a minute separated by a quarter minute. Shaking sensation, rattling pictures, etc.

Though he was a skilled mechanic, Keeper Dickenson struggled to keep the fog signal equipment operational. One January day he noted, Started horn at 8:30 gave few blasts then went dead. Tried 3 more pistons no sound from any. Made a rubber gasket and fastened down and horn going irregularly at 9:45. Fairly good at 11:30 a.m. cleared at noon. Started again at 8:45 p.m. very irregular until 10 p.m. when went dead and could get no sound from any of 4 pistons. Worked on it until 1 a.m. and my wife used hand horn. Am beat. Very foggy night. Several years later, just a week after having spent Christmas Day repairing the fog signal, he wrote, Am just fed up with junk, in fact it is telling on my healthwhat a life, always patching up.

After just over two decades at First Narrows, the Dickensons received word in the spring of 1946 that their station was being automated and they were being transferred to Sheringham Point. After being electrified, the light and fog signal at First Narrows were operated remotely from the signal tower on Lions Gate Bridge.

The station at First Narrows remained standing until February 1969, when Vancouver Pile Driving and Contracting Co. set the station afire and let it burn down to the water. In order to improve the shipping channel, extensive dredging was carried out around the lighthouse, and it was decided that the station had to be removed.

A light called First Narrows is still in operation near the mouth of Capilano River. In 2021, a white cylindrical tower marked with a green band at its top and supported by a four-pile dolphin displayed a flashing green light near the entrance to the river.

For a larger map of First Narrows Lighthouse, click the lighthouse in the above map.