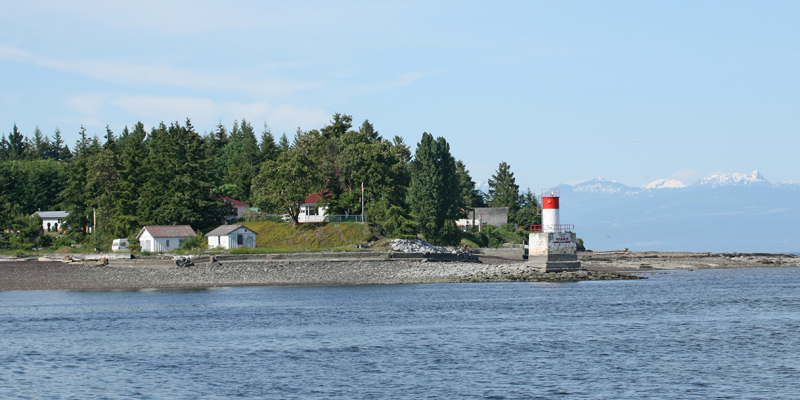 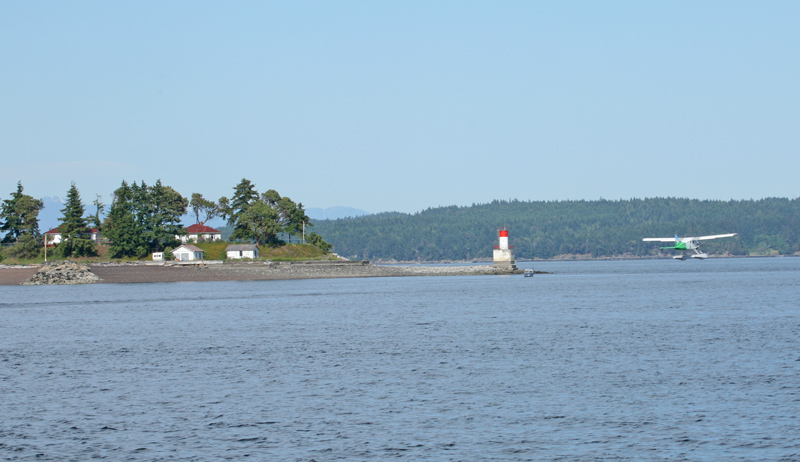 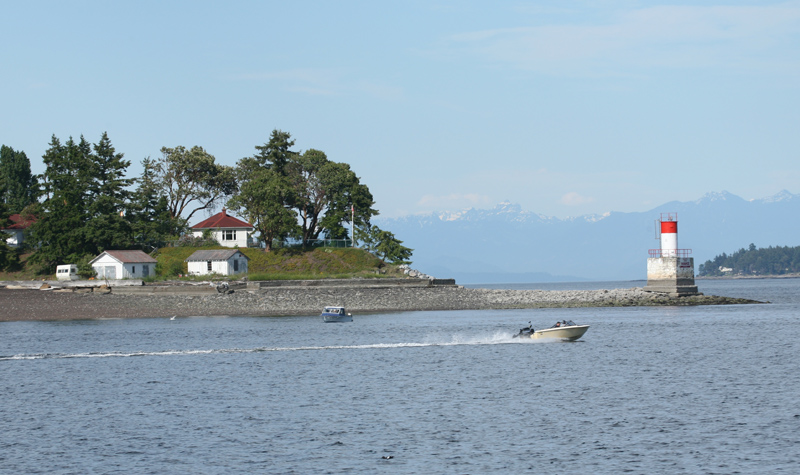 Protection Island lies just offshore from Nanaimo, and, as its name implies, it protects the harbour at Nanaimo from the open waters of the Strait of Georgia. Captain J.T. Walbran, in his book British Columbia Coast Names, explains how Gallows Point, the southernmost point of Protection Island, received its name:

Gallows point, Protection island, Nanaimo. First named Execution point, and later Gallows point, by the officers of the Hudsons Bay Company, because two Indians were hanged there for murder, 17 January, 1853. In the winter of 1852-1853, two young natives, a Cowichan and a Nanaimo Indian, wantonly shot and killed Peter Brown, a Scottish shepherd.

After they were captured, the two men were tried for murder on the quarterdeck of the Beaver and then hanged on the south point of what was then known as Douglas Island. In 1906, the Department of Marine established a fog bell on Gallows Point. The bell was mounted atop a square, wooden building, and machinery was used to strike the bell once every five seconds during thick or foggy weather. The cost of establishing the fog bell was $122.

A beacon light had been established off Gallows Point in 1892, when a lantern set atop of cluster of three piles took the place of a lighted buoy. The beacon light was moved to the other side of the channel in 1901, and in 1908, its piles were coppered and the gas-lighted beacon was entirely rebuilt.

The Western Fuel Corporation, which owned a coal mine whose entrance shaft was located near Gallows Point, was listed as the keeper of the navigational aids at Gallows Point from 1906 through 1923 and received an annual payment of $120.

The approach to the fog bell at Gallows Point was repaired in 1921, and in 1923, a concrete foundation was built to support a square, white, wooden tower topped by a red lantern that was powered by an electric light.

In December 1923, Nanaimos Board of Trade complained that its steamers had been forced to lie at anchor outside the harbour during recent foggy weather due to the inadequate lights and fog signals in the harbour. In 1925, an electric siren was installed at Gallows Point in place of the fog bell. (The bell still had a signature of one stroke every five seconds when it was discontinued. ) After the Canadian Pacific Railways Princess Elaine stranded on Gallows Point in 1936, a powerful diaphone was finally installed. The horn gave a two-second blast followed by thirteen seconds of silence when needed.

In the 1970s, a white, circular tower with a red band at its top took the place of the square, wooden tower. Around 2014, a white skeleton tower replaced the circular tower, and in 2021 it was displaying a flashing white light. The stations fog signal has long been discontinued.

For a larger map of Gallows Point Lighthouse, click the lighthouse in the above map.

The light can be seen from ferries serving Nanaimo, and can also be seen by taking the ferry to protection island.