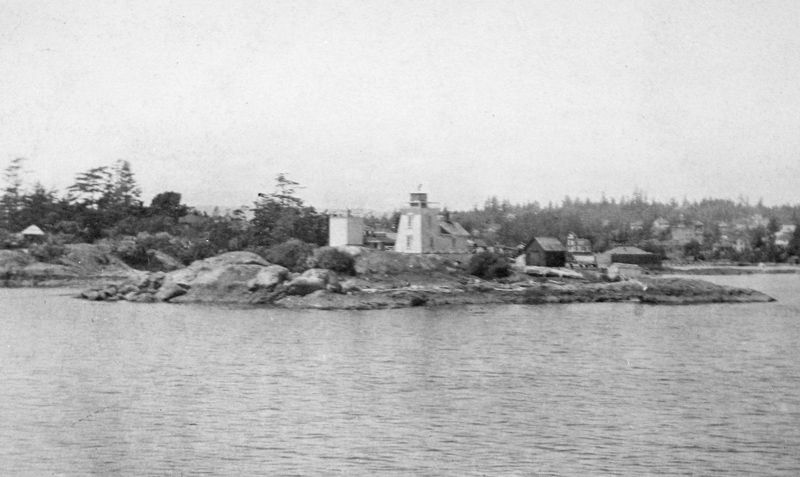 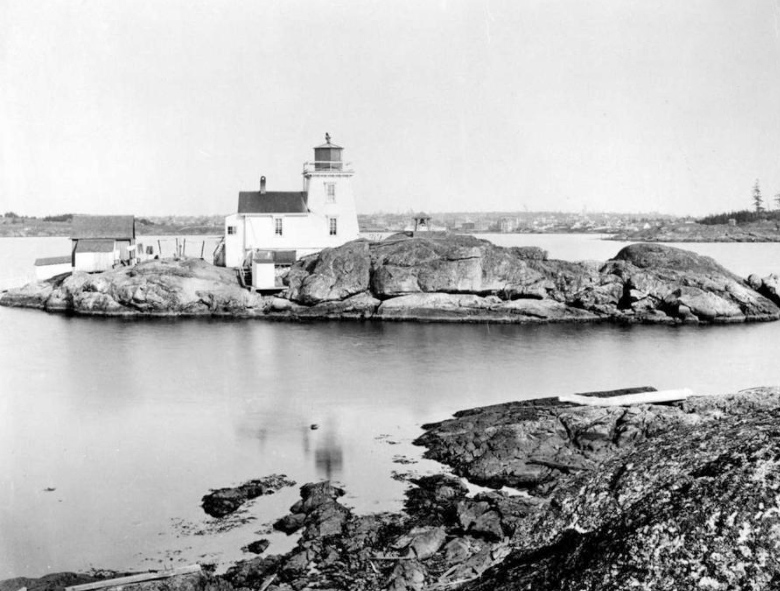 In 1871, British Columbia became the sixth province of Canada with Victoria as its capital. Fisgard Lighthouse had been built in 1860 to mark the entrance to nearby Esquimalt Harbour, which housed a navy base, but a light was needed to mark the entrance to Victoria Harbour. Tiny Berens Island, located just west of the harbour entrance, was selected as the site for the lighthouse. In its annual report, the Department of Marine described the new light, which was built under contract by Louis Baker and placed in operation in 1875.

The Light at Beren's Island, which was put in operation on the 5th March last, consists of a fixed blue light on the catoptric principle, is elevated 44 feet above high water, and can be seen in clear weather from six to seven miles. The building is a square wooden tower, 30 feet high from base to vane, with a dwelling attached, and is painted white. The sum of $2,295.68 was expended on this lighthouse during the past fiscal year, making the total cost of the lighthouse $3,218.38. Mr. Emanuel Cox was appointed keeper of this lighthouse, by Order in Council of the 8th March, at a salary of $500.

The lighthouse had one small bedroom and a kitchen/living room. Keeper Cox and his wife had four children, which made living conditions extremely tight. Cox appealed to the Department of Marine for an addition to be made to the lighthouse. The structure certainly needed some attention as in the fall of 1876 a canvas covering had to be put on the tower to stop the rain from making its way into the living quarters. Keeper Cox was transferred to Cape Beale in 1877, likely before any addition was made to the lighthouse, and Alexander McKinnon was assigned to Berens Island.

The blue light at Berens Island was produced by suspending blue glass in front of the reflectors and was a very unique signature for a lighthouse. Due to the dark shade of the glass the blue light was not very bright. This deficiency was remedied in in 1895, when a sixth-order lens was placed in the lighthouse to produce an occulting white light.

In 1887, a fog bell was suspended in a roofed framework on the seaward side of the lighthouse. Whenever steamers blew their whistles on entering the harbour in thick weather, the keeper was required to strike the bell by hand. In 1906, a new square wooden building, painted white and surmounted by a bell, was placed on the island. This structure housed machinery for striking the fog bell once every five seconds, greatly reducing the keepers workload.

A boat slip was built on the island along with the lighthouse, but this was replaced in 1882 by a floating landing stage that was secured to the rocky island in a sheltered location. During the winter of 1886-1887, a storm tore away the landing and wrecked the stations boat.

During a foggy night in August 1887, Keeper Alexander McKinnon became annoyed by the continued blasts of a vessels horn at the entrance to the harbour. He rowed out to investigate and hauled himself aboard the SS Abyssinia via a rope ladder. The ships captain explained that he was attempting to summon the Victoria pilot to steer the ship to Vancouver. As the captain evinced great anxiety to proceed, Keeper McKinnon took the helm and guided the ship safely to Vancouver.

When the pilot at Victoria learned what had happened, he was furious that the keeper had usurped his authority. The matter was brought to the attention of James Gaudin, the Marine Agent at Victoria, who reported the incident to his superior in Ottawa. As he had not been absent from his station for ten years and had left his wife in charge of the light, Keeper McKinnon was not reprimanded, however, he was told to cut short his career as a pilot and only assist such vessels that were in need of assistance for the purpose of saving life and property.

Keeper McKinnon suffered a paralytic stroke in December 1890, but he was allowed to remain officially in charge of the light, while his wife Mary took over his duties. When Alexander McKinnon died in May 1895, his wife was finally appointed keeper, a position she held for the next two years.

In February 1918, two young men rented a canoe at Point Ellice Boathouse and spent several hours paddling around Victoria Harbour. As they had no experience with a canoe, the keeper of the boats had advised them to take a rowboat, but they insisted on taking a canoe. When they attempted to change seats, the canoe capsized, spilling them into the frigid water. Though they were good swimmers, they were reluctant to swim for shore as they were concerned hypothermia might disabled them en route. Keeper William Harrison witnessed the accident and set off in his small rowboat without delay. He rescued the two men and the canoe and took them back to the lighthouse where a few hours in front of a stove and some liquid stimulant soon had them ready to head back to the boathouse.

Berens Island Light was electrified in 1925 and an electric fog signal was installed, eliminating the need for a resident keeper. The wooden lighthouse was torn down, and a pole with a white daymark that displayed an occulting white light took its place. A white tower with a green band at its top was displaying a flashing green light from Berens Island in 2021.

For a larger map of Berens Island Lighthouse, click the lighthouse in the above map.

The modern light can be seen from the harbour or shoreline at Victoria.