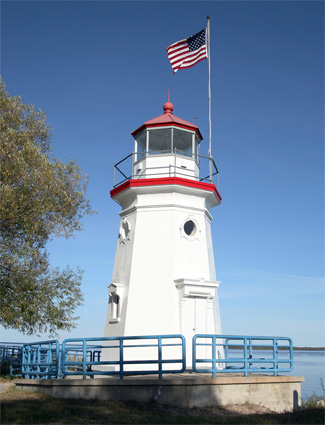 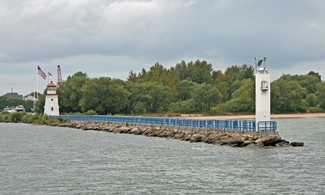 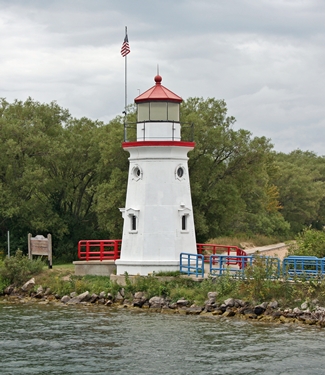 In 1871, a project was adopted to improve the harbor at Cheboygan by dredging the river to a width of 200 feet and a depth of not less than fourteen feet. By the end of June 1883, the portion of the river between the steamboat landing and the railroad dock had been dredged to the prescribed width and depth. From the railroad dock, a 110-foot-wide channel led lakeward for 1,600 feet followed by a ninety-foot-wide cut that extended out to the fifteen-foot curve in the lake. Subsequent work extended the width of the channel to 200 feet from the lake all the way to the state road bridge. Prior to these improvements, the water over the bar at the mouth of the river had a depth of just seven feet.

A list of shipments entering and leaving Cheboygan in 1888 clearly shows that lumber was the main driver of the local economy. During that shipping season, 100 million board feet of lumber, 20 million lathes, 8 million shingles, and 1 million pickets left the harbor along with 1,000 tons of fish and 2,000 barrels of flour. Imports were limited to brick, coal, and general merchandise.

To help mariners locate the entrance to the river, a light was established atop a forty-foot-square, offshore crib in line with the western bank of the river. The following description of this work comes from the 1885 Annual Report of the Lighthouse Board:

An iron pierhead beacon was erected, by contract, on October 15, 1884, on an oak ring foundation, on the isolated crib at the end of the channel dredged into the mouth of this river. The beacon was then lined with beaded ceiling 2 ½ inches wide put on in panels, a hole was drilled through the lantern-deck and a galvanized-iron smoke-pipe fitted to it for a chimney for the keepers stove, an oil room was fitted up under it in the superstructure of the crib, a lightning rod was attached to its base and carried down into the water, two iron boat-cranes were erected on the crib, and iron steps were put up, and the beacon was thoroughly painted. On November 1, 1884, the station was lighted.

The octagonal tower, which was originally painted brown, stands thirty-three feet tall and is similar to ones installed at Vermilion, Ohio in 1877 and Rochester, New York in 1881. A circular iron stairway provides access to the watchroom, where four circular windows with a diameter of fifteen inches help light the interior. The twenty-five-ton tower was built by Russell Car Wheel Foundry of Detroit and was fastened to the underlying heavy oak timbers with two-inch bolts.

A dedicated keeper was never assigned to the crib light. Rather, an assistant keeper position was added to the Cheboygan River Range Lights, and that stations two keepers were responsible for looking after the range lights and the crib light. In 1897, a two-room dwelling for the assistant keeper was built on the crib, so he could stay at the light. The iron tower, which was accessed from the dwelling by an iron door, was painted white in 1901.

In July 1902, a diver examined the foundation crib and found that the substructure was in good condition, but the superstructure was in urgent need of repairs. Built in 1881 in sixteen feet of water, the pier had been repaired multiple times and its outer angles and north face had been sheathed in quarter-inch plate-iron to protect it from ice. To reduce repairs in the future, the Lighthouse Board decided to replace the wooden superstructure with concrete and masonry. The lowest bid for the project was accepted, and the reconstruction work began on June 1, 1903. The upper portion of the crib was removed down to twelve inches below water level, and a brick and concrete pier, containing an oil cellar, a cellar beneath the dwelling, and a foundation for the iron tower, was completed in September.

A fourth-order, Fresnel lens, manufactured in Paris by Barbier, Benard & Turenne, was originally used in the tower to produce a fixed red light that could be seen for up to thirteen miles. The red light was produced by a red glass chimney used on the oil lamp set inside the Fresnel lens. On June 12, 1925, the characteristic of the light was changed to a red flash every two seconds.

In 1910, a 1,200-pound fog bell was hung from a skeleton tower on the northwest corner of the crib. The upper part of the tower was enclosed by steel plates and housed a No. 3 Gamewell striker, whose weight had to be wound up every two-and-a-half hours in order to toll the bell at ten seconds intervals. The Lighthouse Service Bulletin for February 1932 lauded the performance of an automated striker installed in the tower.

With the close of the navigation season of 1931, the CO2 gas-operated fog-bell striker at Cheboygan Crib, Mich., in the eleventh district, completed its seventh season of service, having been installed on June 12, 1925. During this period the striker has never failed. It has never been removed or taken down for repairs. The only attendance which has been required during this period has been the furnishing of the gas supply and the cleaning and oiling of the piston twice a month, which is done by the keeper of Cheboygan Range Light Station, under whose supervision this bell operates. Vaseline with a little teleo oil mixed with it is used as the lubricant. The calcium chloride dryer is removed at the close of each season.

During this period the bell has been struck by this automatic striker nearly ten million times, each operation requiring the functioning of the various parts of the mechanism. This is considered to be a remarkable record for a piece of comparatively delicate automatic apparatus.

Cheboygan Crib Light was automated in the late 1920s and equipped with an acetylene light that required only an occasional visit. By the 1980s, the crib had developed a significant lean, and the Coast Guard determined that it would be less expensive to demolish rather than repair the structure. Ryba Marine Construction of Cheboygan was hired to remove the crib, and under an agreement with the Coast Guard, the iron tower was first barged to the mouth of the river where it was placed atop a new cement foundation at the foot of the pier in Gordon Turner Park. The foundation was built using a $40,000 grant Cheboygan received from the state.

In early 2001, members of the Great Lakes Lighthouse Keepers Association (GLLKA) visited the lighthouse and found that it was no longer weatherproof and that its Lexan windows had darkened and cracked. GLLKA offered to provide the labor to restore the lighthouse if the City of Cheboygan would pay for the materials. During August 2001, windows were replaced, the towers joints were recaulked, and the lighthouse received a new coat of paint.

Cheboygan Crib Lighthouse has become a symbol for the area, appearing in logos for the City of Cheboygan, the Cheboygan Area Chamber of Commerce, the Cheboygan Area Tourist Bureau, and the Cheboygan Daily Tribune. In 2003, the Coast Guard sent a list of nonessential property that was available for disposal to the General Services Administration (GSA). Surprisingly, the crib light, which many thought belonged to the city, was on the list. A representative of the GSA contacted the Cheboygan City Manager, and the formal process of transferring the structure to the city was initiated. We know it sits on city land, is obviously an icon of the city, a symbol of the city, said GSA spokeswoman Meta Cushing. It belongs to the locals and is not needed by the federal government anymore.

For a larger map of Cheboygan Crib Lighthouse, click the lighthouse in the above map.

From Highway 23 in Cheboygan, just west of Cheboygan River, go north on Huron Street for less than one mile to Gordon Turner Park, where there is a boardwalk which leads to Cheboygan River and the light. You can also see the lighthouse on eastbound lighthouse cruises offered by Shepler's.

The lighthouse is owned by the City of Cheboygan. Grounds open, tower closed.