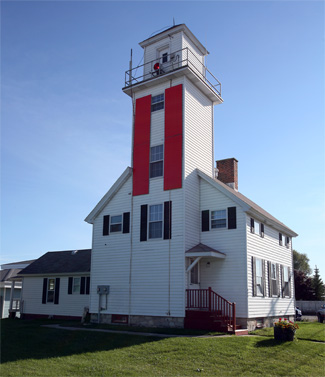 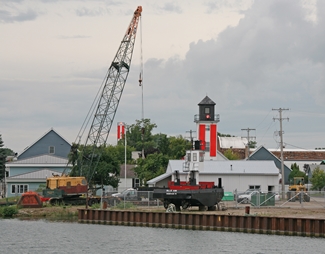 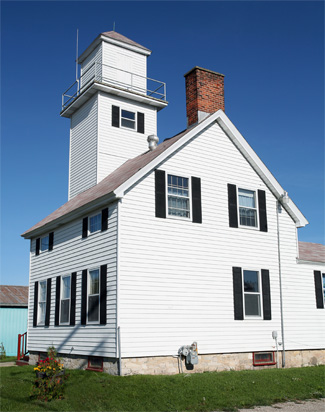 In 1871, a project was adopted to improve the harbor at Cheboygan by dredging the river to a width of 200 feet and a depth of not less than fourteen feet. By the end of June 1883, the portion of the river between the steamboat landing and the railroad dock had been dredged to the prescribed width and depth. From the railroad dock, a 110-foot-wide channel led lakeward for 1,600 feet followed by a ninety-foot-wide cut that extended out to the fifteen-foot curve in Lake Huron. Subsequent work extended the width of the channel to 200 feet from the lake all the way to the state road bridge. Prior to these improvements, the water over the bar at the mouth of the river had a depth of just seven feet. A list of shipments entering and leaving Cheboygan in 1888 clearly shows that lumber was the main driver of the local economy. During that shipping season, 100 million board feet of lumber, 20 million lathes, 8 million shingles, and 1 million pickets left the harbor along with 1,000 tons of fish and 2,000 barrels of flour. Imports were limited to brick, coal, and general merchandise.

With harbor improvements planned, Congress allocated $10,000 on July 31, 1876 for range lights at the mouth of Cheboygan River, but as litigation was necessary to acquire one of the two range light sites on the west side of the river, construction could not start until June 1880. The front light was originally a lens lantern displayed from a nine-foot-square tower set atop the north gable of a two-story keepers dwelling, while a skeletal, wooden tower was built for the rear light. The focal plane for the front light was forty-two feet and sixty-eight feet for the rear light.

The lights were exhibited for the first time on the night of September 30, 1880. In 1884, a sixth-order, Henry-Lepaute Fresnel lens was substituted for the lens lantern in the front light, and both lights were changed from fixed white to fixed red.

George P. Humphreys, the first keeper of the range lights, resigned after two years and was replaced by James W. Rich, who was transferred to Copper Harbor Lighthouse after just four months in Cheboygan. Ivory Littlefield, a veteran who had his left foot shot off during the Civil War, was appointed the third keeper of the range lights in 1883. During Littlefields tenure, an assistant keeper was assigned to the station to help with the added responsibility of minding Cheboygan Crib Lighthouse, which commenced operation off the mouth of the river in 1884.

When Keeper Littlefield passed away in August 1894, his wife, Philancy, served as keeper for one month before resigning. John Sinclair, Jr. was then appointed head keeper, and he served until 1899, when he was transferred and John Duffy was placed in charge of the range lights.

In September 1889, the keepers dwelling was connected to city water, and the following year, the Lighthouse Board requested $1,500 to purchase the property between the dwelling and the river, as the dwellings cellar often flooded and there was no way to drain it except to the river over private land. While waiting for the funds to be provided, the dwelling was moved to a new site on the lighthouse lot in 1891 and pipe was laid connecting the cellar to the river. After repeated requests, Congress finally appropriated $1,750 on July 1, 1898 for the purchase of additional land adjacent to the front range light. The question of ownership of the desired parcel had to be settled in court, and a deed for it was not obtained until 1910, twenty years after the initial request for funds to purchase more land.

In 1892, a circular iron oil house, with a capacity of 360 gallons, was erected next to the dwelling, and a wood shed was built.

The skeletal, timber tower used for the rear light was replaced with a steel one in 1890. This new square, pyramidal, skeletal tower stood on six brick foundation piers and rose to a height of seventy-five feet. A small frame house was built at the base of the tower to store the lamp carriage that was run up and down the tower by a steel cable and winch. White horizontal boards were bolted to the towers frame to form an oval target or daymark that was twenty feet high and twelve feet wide at its middle. The tower was fourteen feet square at its base and just twenty-two inches square at its lantern.

The color of the combined tower and dwelling was changed from brown to white in 1901. By 1910, the dwelling had been painted venetian red, while the tower remained white with a black lantern room. On June 27, 1914, the intensity of the range lights was increased by changing the illuminating apparatus to reflectors.

Martin and Poe Reef Lightships were often moored at the front range light during the winter, and after permanent structures replaced these lightships, the front range light served as a supply point for these and other offshore stations. When the Coast Guard transferred its operations from Cheboygan River to St. Ignace in the 1980s, the U.S. Geological Survey and Department of Fisheries moved into the front range dwelling.

In 2001, Cheboygan Front Range Lighthouse was included in the first group of lighthouses excessed under the National Historic Lighthouse Preservation Act of 2000. After receiving the deed to the property in June 2004, the Great Lakes Lighthouse Keepers Association (GLLKA) used a grant from the Michigan Lighthouse Assistance Program (MLAP) to commission an engineering study to determine needed restoration work. The lighthouses lantern box and gallery have since been rebuilt using a $21,000 MLAP grant, and guest keepers can now volunteer to live in the lighthouse and open it up to visitors on weekends and holidays between Memorial Day and Labor Day. Besides giving tours and running the gift shop, these modern-day keepers also help clean the lighthouse and maintain the grounds.

For a larger map of Cheboygan River Front Range Lighthouse, click the lighthouse in the above map.

In Cheboygan, from Highway 23 take Water Street, the first street on the west side of the Cheboygan River, north for a block where you will see the light. You can also see the lighthouse on eastbound lighthouse cruises offered by Shepler's. The lighthouse is open 9 a.m. to 5 p.m. on Saturdays, Sundays and holidays from Memorial Day weekend through Labor Day weekend.