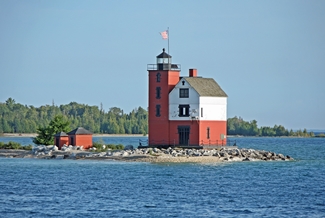 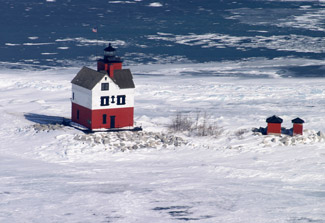 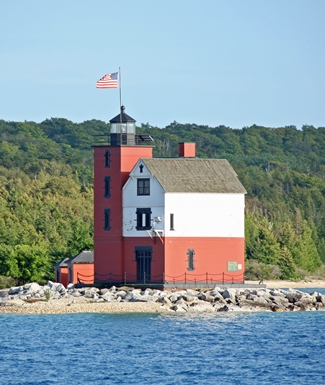 Mariners have two options for reaching the Straits of Mackinac from the east: the South Channel, which passes between the southern side of Bois Blanc Island and the northern shore of Michigans Lower Peninsula, or the North Channel, which runs between Mackinac Island and Round Island. After sailing along the Great Lakes in 1837 on a mission to examine and select sites for lighthouses, Lieutenant G.J. Pendergrast noted that a beacon to direct vessels through the less-than-a-mile-wide passage separating Mackinac Island and Round Island was highly essential, especially since the thoroughfare was lined by dangerous reefs on both sides.

The Lighthouse Board repeated its request for several years, and then picked up the cause again in 1890, asking for $15,000. At present there are no lights to aid the navigation of the northern channel, for which reason vessels are compelled to use the southern, with considerable loss of distance and time, the Board noted. What is needed is a light so placed as to enable vessels to hold a close and safe course between the two [islands], for which reason the light should be either on the spit at the western side of the harbor of Mackinac Island or on the projecting point of Round Island, directly opposite. Since land on Mackinac Island, which was a noted summer resort, would command a high price, the Lighthouse Board recommended the lighthouse be built on Round Island, which the federal government had owned since 1853.

Congress approved the project on February 5, 1893, but didnt provide the necessary funds until August 18, 1894. Detailed plans and specifications for the lighthouse and necessary metalwork were drawn up, and contracts were made for the metalwork, for two fog-signal boilers, and for the erection of the lighthouse and fog signal.

Frank Rounds, who had worked on Mackinac Islands Grand Hotel, was hired to build the lighthouse near the end of a long, narrow point projecting from the northern side of Round Island. A concrete and brick pier, measuring forty by thirty-nine feet and standing nine feet tall, was built as a foundation. The pier was filled with stone and boulders, save space left for a coal-bin cellar, and then paved with flagstones. The redbrick lighthouse built atop the pier consists of a twelve-foot-square tower, rising to a height of fifty-one feet, that forms the northeast corner of a two-and-a-half-story, cross-gabled dwelling.

The boilers and equipment for the stations ten-inch steam whistle took up the first floor, while four rooms and a pantry were located on the second floor and the top floor had three rooms. Inside the towers octagonal lantern room was installed a fourth-order, Henry-Lepaute Fresnel lens, which produced a fixed white light, interrupted every twenty seconds by a red flash. The lens was equipped with two external flash panels, covered by ruby glass screens, and the whole apparatus completed a revolution every forty seconds.

William Marshall, who had been serving as head keeper of Spectacle Reef Lighthouse for the previous fifteen years exhibited the light for the first time on May 15, 1896. The fog signal machinery was delivered later that summer, and the steam whistle commenced operation on October 20, 1896, sounding a five-second blast each minute when needed.

A brick oil house was built roughly ninety-five feet south of the tower, adjacent to the stations brick privy. In 1901, a frame boathouse, boat ways, and a landing crib were added to the station. The characteristic of the light was changed on October 15, 1914 to a red flash every ten seconds, and the fog signal was changed to an air diaphone, sounding a three-second blast every thirty seconds, on August 27, 1928.

During a gale in 1914, Head Keeper George W. Smith and Samuel Massicotte, his assistant, went to the assistance of a disabled motorboat in a rowboat and took one man to shore.

On October 20, 1972, a violent storm tore away the lower portion of the lighthouses southwest corner, threatening the structures integrity and exposing its interior to the elements. Mrs. Fred Haynes, a housewife from Port Huron who had a summer home on Mackinac Island, formed a group to try to save the lighthouse. To me, the light is sort of a pillar to that north channel, she said. It is part of the whole scene in the straits, along with the bridge and everything. Its the statue of the Straits of Mackinac. If people will pay $1 million for a statue by a famous sculpture, why not pay to save this statue, too? By selling buttons on the island and soliciting the help of the Mackinac Island Historical Society, the U.S. Coast Guard, and other organizations, the group raised enough funds to place riprap around the lighthouse in 1974 and repair its walls and foundation by 1977. As part of the preservation effort, Round Island Lighthouse was placed on the National Register of Historic Places in August 1974.

Additional groups came to the aid of the lighthouse in 1995, when Boy Scout Troop 323 from Freeland, Michigan teamed up with Great Lakes Lighthouse Keepers Association to work on restoring the stations structures. Over the years, the Boy Scouts have removed trash and debris from inside the lighthouse, repaired the foundation of the privy, and painted the lighthouse during their annual weekend outings to Round Island. A sign of the Scouts successful rehabilitation work came in 1996, the lights centennial year, when Round Island Lighthouse commenced operation as a private navigational aid, showing two white flashes every ten seconds.

In 2009, people associated with the Boy Scouts efforts to restore the lighthouse over the previous fourteen years teamed up to form Round Island Lighthouse Preservation Society. The society plans to bring together a larger group of people interested in the lighthouse to expand the restoration work. The public is invited to visit the lighthouse during an open house held each year on the second Saturday in July.

In 2020, the Round Island Preservation Society launched a fundraising campaign to secure money for placing riprap around the lighthouse to protect it from record high water levels experienced in recent years. After an anonymous donor gave $250,000 in the fall, fast-track approval by state and federal officials was obtained so that the rocks could be put in place before the end of the year. North Shore Marine Terminal of Escanaba was contracted for the work, and in late November 1,500 tons of protective stones were placed around the lighthouse and oil house.

For a larger map of Round Island Lighthouse, click the lighthouse in the above map.

The lighthouse is owned by the U.S. Forest Service. Grounds open, tower closed.

Find the closest hotels to Round Island Lighthouse


As the majority of "Somewhere in Time" was filmed on Mackinac Island, it is not surprising that Round Island Lighthouse appears in the movie. Distant views of the lighthouse are shown early on from rooms in the Grand Hotel, but later the two main characters, Elise McKenna (Jane Seymour) and Richard Collier (Christopher Reeve) row over to the island and we get a great view of the lighthouse.