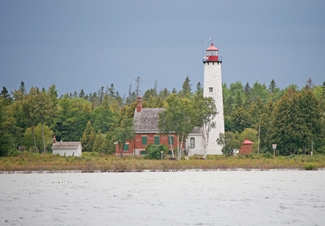 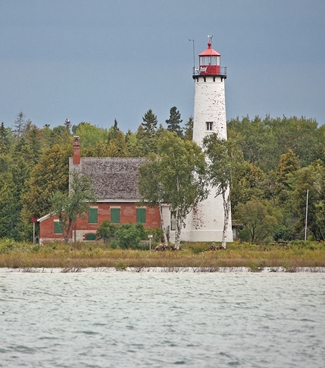 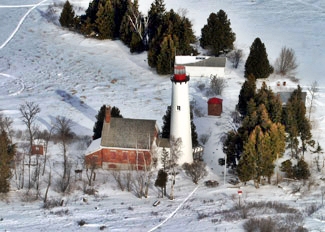 Located seven miles west of Mackinac Bridge and two miles from the mainland, St. Helena Island has a fine natural harbor on its northern shore that offers shelter from fierce southwesterly storms that sweep up the entire length of Lake Michigan, often producing mountainous waves. In the 1800s, the island was home to a thriving fishing station, where each summer whitefish and lake trout were caught in the surrounding waters and then taken back to the island to be salted. Even before receiving a lighthouse, St. Helena Island had been used for lighthouse purposes. When work began on Waugoshance Lighthouse in 1847, St. Helena was used as a base of operations where wooden piers were constructed before being towed out to the shoal and filled with stone. In 1896, a stone crushing plant and depot were established on the island to support the construction of a new concrete protecting pier for Waugoshance Lighthouse.

In its report for 1867, the Lighthouse Board recommended a lighthouse for St. Helena Island, writing:

This island affords an excellent anchorage during westerly and southwesterly gales. It is nothing unusual to see a fleet of fifty sail at one time at anchor under the island. It is low, and the main land to the north of it being high, the island, when approached from the southward, can be seen but a short distance. A light here would be of much service, and an estimate of the cost of one is submitted.

After annual requests by the Lighthouse Board, Congress finally appropriated $14,000 for St. Helena Lighthouse on June 10, 1872.

Work on the island began in mid-September 1872, and by the close of the season on November 9, the foundations for the tower, dwelling, and covered passageway between them were nearly complete. Wooden piles were driven down to the underlying rock and then cut off below the waterline and covered with three feet of concrete to form a sturdy base for the tower, and atop this were laid regular courses of cut stone filled with rubble masonry to complete the foundation.

Work resumed on May 9, 1873, and by the end of June the entire station was finished save the installation of the lens and a few minor details. Double-walled construction was used in the seventy-one-foot, redbrick tower, which tapered from a diameter of sixteen feet at its base to nine feet at its lantern room. A circular stairway with three landings wound up the tower to the decagonal lantern room, where a third-and-a-half-order, Henry-Lepaute Fresnel lens was installed. The attached two-story keepers dwelling, also built with red brick, contained eight rooms for the keeper and his family.

Keeper Thomas P. Dunn lit the lamp inside the Fresnel lens for the first time on the night of September 20, 1873, sending a sheet of red light out over Lake Michigan. After just two years on the island, Keeper Dunn swapped assignments with Charles Louisignau, who was serving at McGulpin Point Lighthouse. During the early years at the lighthouse, the keeper just had to walk a mile to reach the small village on the island, where there was a post office and a good steamboat landing, but the islands inhabitants had greatly decreased in number by 1907, when the nearest post office was three-and-a-half miles away at Gros Cap.

A new landing crib and 140-foot-long boatways were added to the station in 1895, along with 200 running feet of sidewalk and a brick oil house.

All alone on the island, Charles Marshall began the annual whitewashing of the tower in August 1900. Perched in a boatswains chair suspended by ropes from the top of the lighthouse, Keeper Marshall was working at a height of forty-five feet when he discovered that the control rope for lowering or raising the chair was beyond his reach. Realizing the seriousness of his predicament, Marshall vigorously waved at passing fishermen, but they just returned his greeting and continued on. Sunburned and nearly delirious, Marshall lashed himself to the chair as the day drew to a close. A passing tug noticed the light was out and stopped to investigate. Keeper Marshall was lowered to the ground and taken to a doctor in Mackinaw City, but the effects of the ordeal remained with him the rest of his life. George Leggatt, an assistant at Old Mackinac Point Lighthouse, was sent to be the new head keeper at St. Helena Island, and Keeper Marshall was given Leggatts former position, which required less responsibility.

Charles Marshall served as an assistant to his brother George at Old Makinac Point until 1902, when his health had deteriorated to the point that he had to be hospitalized at Northern Michigan Asylum in Traverse City.

In 1901, Joseph Fountain was transferred from Seul Choix Lighthouse to St. Helena to take the place of Keeper Leggatt, who drowned after less than a year on the island. The efforts of Keeper Fountain to save people in trouble near the lighthouse were twice recognized in records of the Lighthouse Service. The first instance occurred in 1913, when Keeper Fountain rescued two men, lost out on the ice and nearly frozen, and brought them to the lighthouse. The next year, Keeper Fountain and Wallace Hall, his assistant, went to the aid of two men in a leaking boat. A single keeper was responsible for St. Helena Lighthouse until 1909, when Louis P. Beloungea, Jr. became the stations first assistant.

St. Helena Lighthouse lost its resident keepers on June 4, 1922, when the light was converted to an unattended acetylene light that displayed a red flash every five seconds. It wasnt long before the keeperless station had fallen victim to vandals and the passage of time. All windows, doors, and banisters had been torn out, along with much of the flooring. Fearing the stations boathouse and frame assistant keepers dwelling might collapse, the Coast Guard eventually demolished these structures.

A few retired lighthouse keepers, joined by family and friends, formed the Great Lakes Lighthouse Keepers Association (GLLKA) in 1984, with Dick Moehl as president, and obtained a license from the Coast Guard that same year to restore St. Helena Island Lighthouse. The lighthouse was placed on the National Register of Historic Places in 1988, and the following year Boy Scout Troop 4 from Ann Arbor began what has become an annual pilgrimage to help save the light station. Over the years, the dwellings roof has been replaced, a new lantern room installed, the boathouse and assistant keepers dwelling rebuilt, the oil house repaired, and the interior of the keepers dwelling lovingly renovated. Over twenty Eagle Scout projects have been carried out at the lighthouse. The diligent work of the Boy Scout troop was captured in a 1991 documentary entitled Keepers of the Light that was shown on PBS stations in Michigan. Ownership of the lighthouse was deservedly transferred to GLLKA in 1997 through legislation sponsored by U.S. Representative Bart Stupak.

Volunteers are invited to be part of the effort which has been dubbed The Miracle of the Straits. All you need to become one of the miracle workers is pay $100 for transportation to the island and $25 per day for food during your stay, which can range anywhere from four days up to two months.

For a larger map of St. Helena Island Lighthouse, click the lighthouse in the above map.