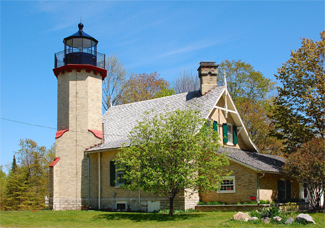 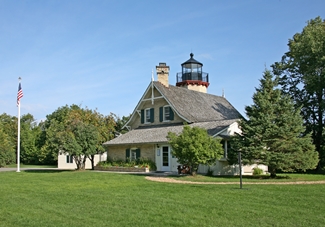 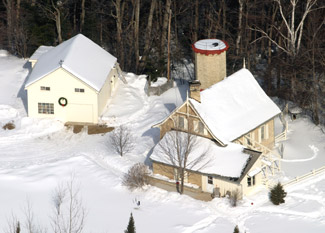 McGulpin point is named for John McGulpin, who came to North America around 1760 as an officer in the British army and later served at Fort Michilmackinac. When his regiment was transferred to Massachusetts in 1774, John elected to retire after twenty-four years of service and was given an allotment of land just west of the fort. A deed to this land, which had been passed on to Johns son Patrick, was signed by President James Madison in 1811, and the 640 acres have been known since as McGulpin Point.

As McGulpin Point Lighthouse stands over 700 feet from the shore and is surrounded by a dense forest, it can be hard to imagine how this structure served mariners passing between Lake Huron and Lake Michigan. A climb up into the lantern room, however, reveals an expansive view of the straits, and a quick look at a map of the northern end of Michigans Lower Peninsula reveals that it has two tips, McGulpin Point and Old Mackinac Point, separated by just two miles.

Waugoshance Lighthouse was completed in 1851 to mark the western entrance to the Straits of Mackinac, and Cheboygan Lighthouse went into service that same year to mark the eastern approach. Still, a light was needed to mark the narrowest part of the strait, and in 1865, the Lighthouse Board wrote, A light-house at or near old Fort Mackinac is much needed to enable vessels to pass through the straits at night, and McGulpins Point, about two miles distant, is designated by the engineer of the district as the most suitable location.

On July 28, 1866, Congress appropriated $20,000 for a lighthouse at McGulpin Point. A ten-acre site was selected for the lighthouse, but condemnation proceedings under the laws of the State of Michigan had to be instituted in 1867 to obtain title to the land. Work on the lighthouse began in 1868, and the light was first exhibited on June 18, 1869, after an early close of navigation shortened the previous working season and prevented the light from being finished in 1868. The total cost of the lighthouse, including the price of the land, was $19,782.74.

McGulpin Point Lighthouse was built with plans that were also used at Chambers Island and Eagle Bluff in 1868, Eagle Harbor and St. Clair Flats Canal in 1871, White River in 1875, and Passage Island and Sand Island in 1882. Constructed in what has been called a Norman Gothic style, these lighthouses consist of a tower set diagonally into one corner of a one-and-a-half-story dwelling. Just above the dwellings roof line, the corners of the square tower at McGulpin Point are beveled off to create an octagonal tower. A third-and-a-half-order Fresnel lens was used at McGulpin Point to create a fixed white light at a focal plane of 102 feet above the lake  most of this height was due to the hill on which the lighthouse stands, as the tower itself is just forty feet tall.

The first keeper of the lighthouse was Charles Louisignau, who earlier had served at Bois Blanc Lighthouse. In 1875, Keeper Louisignau swapped assignments with Thomas P. Dunn, keeper of St. Helena Island Lighthouse. Keeper Dunn passed away in 1879, and was replaced by Gabriel Bourissau, who was transferred to Little Sable Point Lighthouse after just a few months and replaced by James Davenport.

In 1875 and 1879, the Lighthouse Board requested $5,000 for a steam whistle at McGulpin Point, but in 1873, it had asked for $15,000 for a lighthouse and fog signal at Mackinac or vicinity, signaling some confusion as to where navigation aids near Mackinaw were needed. In 1888, the Lighthouse Board had apparently made up its mind, as it requested $25,000 for the removal of the lighthouse from McGulpin Point to Old Mackinac Point, noting that it would have been better if McGulpins Point light had been located on the point 2 miles to the eastward, at Old Fort Mackinac, as it would then have been visible to vessels approaching from either direction.

Improvements continued to be made at McGulpin Point, as records indicate a new barn was built in 1894, a twenty-seven-foot well was drilled in 1896, a brick oil house was added in 1897, a storm house was built over the front entrance to the dwelling in 1899, and the boathouse was rebuilt in 1903.

In 2005, McGulpin Point Lighthouse and the adjoining 11.5 acres were placed on the market for $1.75 million by the Peppler family. By early 2008, the price had been reduced to $974,900, and later that year, Emmet County Commissioners voted to purchase the property for $710,000. In April 2009, the commissioners approved $103,000 for the purchase of a pair of lots adjacent to the lighthouse for parking or a museum to complement the lighthouse. The expenditure of $25,000 for plaques, signs, installation of a flagpole and promotional materials in preparation for the May 30 rededication of the lighthouse was also approved at the same meeting. A replica lantern room, fabricated by Moran Iron Works in Onaway, was placed atop the lighthouse on April 23, 2009.

Roughly 1,200 people attended the festivities commemorating the relighting of the lighthouse held on May 30, 2009. After an invocation by Frank Ettawageshik, tribal chairman of Little Traverse Bay Bands of Odawa Indians, and a stirring performance by four Native American drummers, the light at the top of the tower was turned on by U.S. Senator Debbie Stabenow and James Tamlyn, chair of Emmet County Board of Commissioners.

In preparation for the 2012 season, the gift shop was expanded and the parking lot was paved. An OnCell mobile phone tour has been established at the lighthouse, allowing visitors to learn about the lighthouse and the areas culture.

For a larger map of McGulpin Point Lighthouse, click the lighthouse in the above map.

From Michilimackinac State Park drive south to Central Avenue. Turn right on Central Avenue and continue for just over two miles to where the road tees. Turn right onto Headlands Road, and McGulpin Point Lighthouse will be on your right before the road dead-ends. The lighthouse is open from 10 a.m to 8 p.m., mid-May through September, and on weekends in October. Admission is $3. The lighthouse can be reached at (231) 436-5860.

The lighthouse is owned by Emmet County. Grounds/dwelling/tower open.