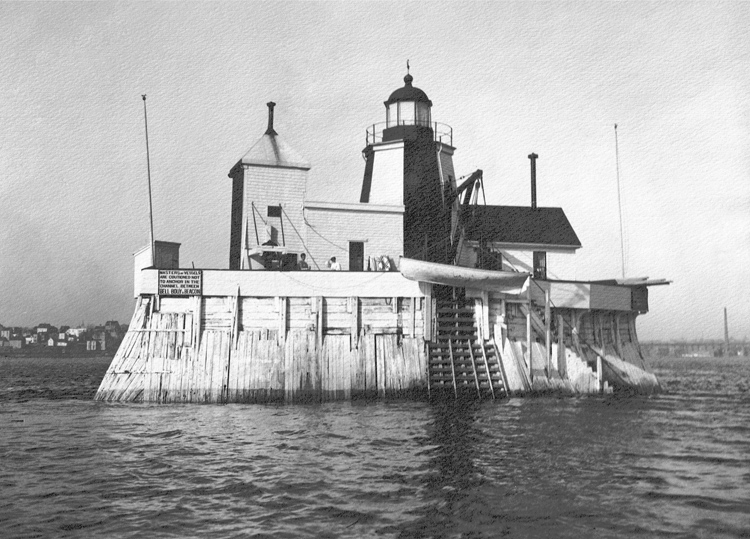 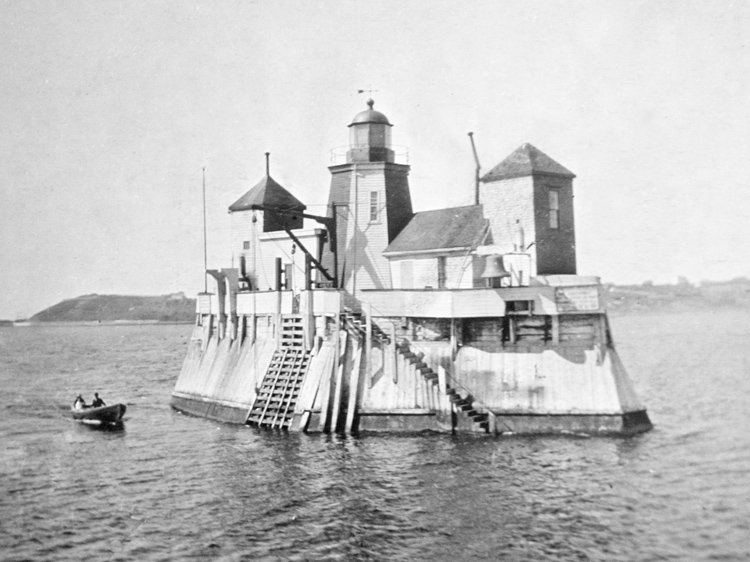 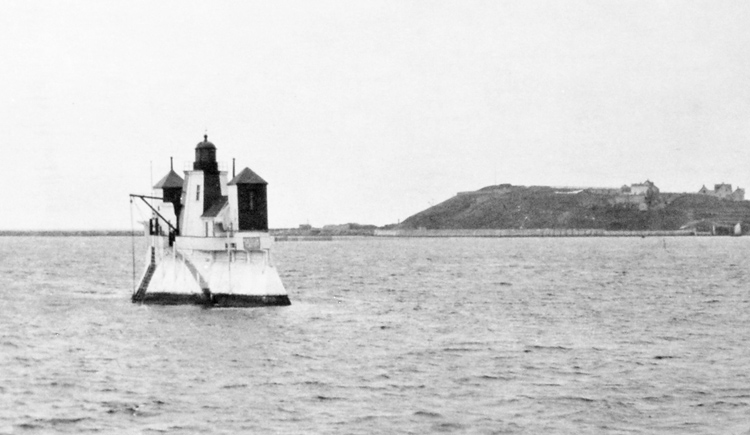 To facilitate navigation into the port of Saint John, the Beacon Light was established atop a substantial wooden pier in the harbour in 1828. George Lane was an early keeper of the lighthouse, New Brunswicks second after the one on Partridge Island, and in 1833, he was receiving an annual salary of £100.

In 1841, new reflectors were placed in the Beacon Light, and the older reflectors used there were taken to Cape Enrage Lighthouse. In this same year, the commissioners in charge of overseeing the light expressed their concert over Keeper George Lane being unable to attend the light in person constantly due to his advanced age. Keeper Lane paid an assistant to help him, but this left the light and supplies in charge of person that was in now way responsible to the province.

On the morning of January 7, 1867, the keeper of the Beacon Light was absent from the station when his two sons opened the coal cellar and discovered a fire. With much effort, the pair saved the four reflectors in the lantern room, before fleeing the structure and watching helplessly as it burned down to the water level. John McLachlan rebuilt the lighthouse and pier in 1868 for $2,300, which did not include the cost of a fourth-order French lens.

James E. Earle was appointed keeper in June of 1869. Just a few months later, during the night of October 4, a great tidal wave, produced by what is now known as the Saxby Gale, swept over the lighthouse, tearing away the shingles and boards of the lower storey. During the storm, Keeper Earle sought refuge in the lantern, and when he was taken off the station the next day, he could not be convinced to resume his duties. The great wave swept away the stations boat, railing, and steps, and tore away planking on the pier, allowing large quantities of the piers ballast to be washed away. Though the tower was heavily damaged, its light was shown as usual the following night. Repairs costing $898 were immediately initiated at the station.

In 1871, a large fog bell was installed at the lighthouse, and the keeper was instructed to sound the bell by hand in response to the whistle of steamers or call of vessels seeking their way into the harbor. A bell tower was built on the southwest side of the pier in 1875, and clockwork machinery was used to continuously toll the bell in foggy weather. The machinery had to be wound every two hours, and for one stretch during 1877, the bell was in constant operation for nearly three weeks. In 1905, the fog bell was relocated to the northeast end of the pier.

Give its exposed location, the foundation pier on which the Beacon Light stood required regular repairs. In 1874, John H. Harding, the Marine Agent at Saint John, gave the following description of the work need on the Beacon Light:

The block on which it is erected has been repeatedly injured by violent storms. On such occasions, with the wind from the south-west meeting the current that flows out of the harbour, raises the billows to an enormous height, and they are dashed against the block with such violence that they sometimes pass completely over it, and several feet up against the light-house inside.

The repeated shocks that it has withstood from the almost resistless force of the breakers, have loosened and broken the fastenings and bolts of the foundation timbers. The consequence is that after almost every violent storm the block is required to be put in repair. During the past year the sum of $822.75 has been expended upon it, chiefly in repairing the damages from the elements.

After the storm of the 18th of November, 1873, the keepers boat was found to be broken and the davits swept away.

It is very evident, upon a thorough examination of the block, that it will require to undergo repairs to render it in its peculiar position, proof against the violence of the heavy seas that sweep up the harbour. The foundation has, to some extent, become undermined. The block timbers have spread and worked loose, particularly on the east and west sides. To make this repair permanent, it will be necessary to remove the old covering and replace and rebolt the timber. The facing will require to be removed and to be extended below the timbers sufficiently to prevent the water forcing itself under and undermining the foundation logs.

To carry out this plan will involve a considerable outlay, as there must necessarily be a large amount of time lost on account of the work having to be done between tides; by an early completion of more substantial foundation, however, the Department will remove the risk that is attached to the present unsafe condition of the light-house.

The necessity of making it a solid and enduring structure has been frequently represented to the Department in reports as to its condition. On the 18th September, 1873, the following was forwarded to the Department as the effect of the storm on that date:

The gale of the 18th September caused much damage to this structure. Mr. Clarke, the keeper, reported the waves ran ten feet high over the block up on the tower and cleared all the shingles off; also swept his boat and tackle away, and fears it has damaged the foundation of the block. Mr. Clarke states notwithstanding the quantity of ballast put into the block last summer, yet the waves made it tremble in every part; and further states that the whole structure would probably have gone if it had not received the additional repairs and ballast last year.

There is no doubt but this block will have to undergo such repairs as will make it safe and permanent.

The storm of the 13th February damaged the dioptric lantern; the jar loosened some of the prisms so that they dropped out of their sockets. Mr. Hevenor was sent down immediately to repair the damage.

The Beacon Light was discontinued in 1913, as the bar on which it stood was dredged as part of harbour improvements at Saint John. Sand Point Range Lights were constructed nearby in 1914 to guide mariners into the harbour. New Burrell Johnson Iron Company provided a skeletal tower for the rear light, and a wooden tower was erected for the front light.

For a larger map of Saint John Harbour Beacon Lighthouse, click the lighthouse in the above map.