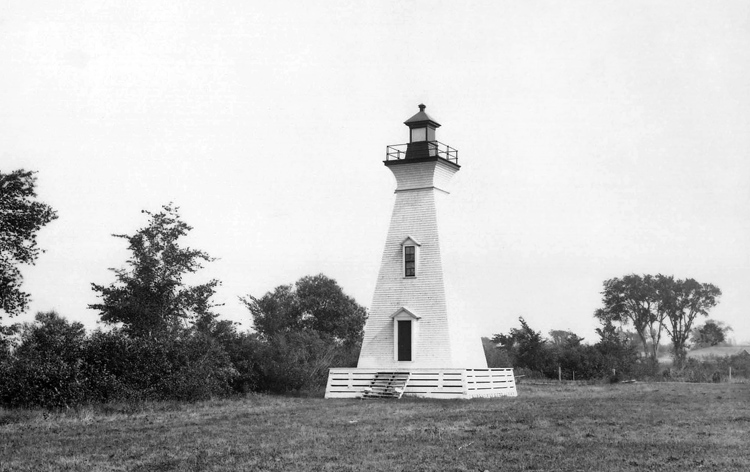 Oromocto Shoals consisted of a series of bars that stretched across the St. John River just below Fredericton. In 1855, a dredge cut a channel through the principal bar, and a light was built to guide vessels through this hazardous stretch in 1869. Oromocto Shoal Light was one of six beacon lights that were established in 1869 to guide mariners navigating the St. John River at a total cost of $2941.74.

Around 1878, this light was relocated to the outer end of a recently built wharf, where it served until its skeletal frame was so rotten that it had to be replaced. Big changes were made to Oromocto Shoal Light in 1895 as described in the annual report of the Department of Marine for that year:

1895 - The light mast at the head of the landing pier at Oromocto, on the River St. John, having become so rotten as to require renewal, advantage was taken of the occasion to remove the light to a site where it could be utilized both up and down the river, and at the same time to improve it by providing an inclosed tower instead of the unreliable lantern on a mast. The new lighthouse stands on low land, on the shore of the river, 1,224 feet S. E. by E. ¼ E. of the site of the old light.

This light was put in operation on the 1st October, 1895, and is a fixed white light elevated 62 feet above the ordinary level of the river, and should be visible down the river to the bend at Middle Island, upstream toward the mouth of the River Oromocto and up River St. John towards Fredericton. The illuminating apparatus is dioptric of the seventh order.

The tower stands on a crib work pier. It is a square, wooden, pyramidal building, painted white, surmounted by a square wooden lantern, painted red. The height from the deck of the pier to the vane of the lantern is 47 feet. Vessels bound up can steer for the light W. by S. ½ S. as soon as they clear Middle Island shoal, and keep their course until past the south end of the Oromocto Island; they then leave the light on the port hand, following the trend of Oromocto Island in mid-channel, until they bring Oromocto light astern and Wilmot Bluff Light ahead when they steer N. W. ¼ N. for the latter light. Vessels bound down reverse these directions.

This attractive tower, after being vandalized on more than one occasion, burned to the ground on May 11, 1962 and was never replaced.

For a larger map of Oromocto Shoal Lighthouse, click the lighthouse in the above map.