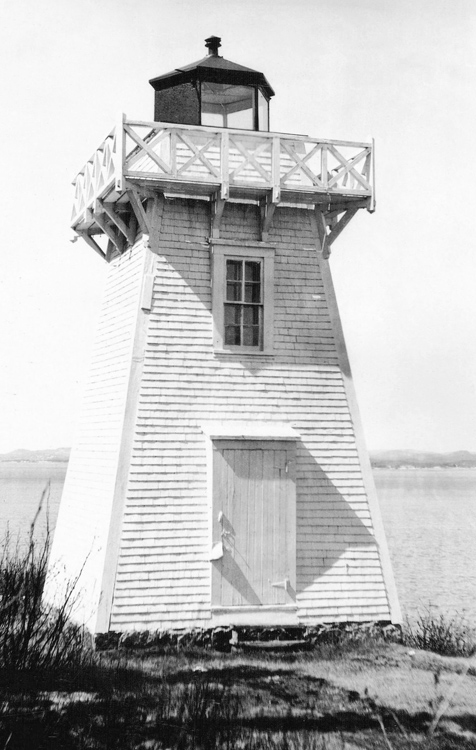 The lighthouse atop Midjik Bluff, situated near the entrance to St. Georges Harbour, first beamed forth its fixed white light on April 1, 1876. The square, pyramidal lighthouse, painted white with a brown lantern, stood 8.8 metres tall, but the bluff gave it a lofty focal plane of 39.6 metres.

John McDiarmid received $50 for the necessary land; C. Messenett was paid $674 for erecting the tower; the lighting apparatus was billed at $526.42; and after various incidentals were included, the total cost of the lighthouse came to $1,330.42. John McDiarmid was appointed the first keeper of the lighthouse, and he served until 1890, when his wife took over responsibility for the light.

The following report on the lighthouse was made shortly after it was placed in service:

This is one of the new light-houses erected during the course of the past year. I found that the house was too much enclosed with trees which obscured the building almost entirely from view when approaching the harbor. I therefore arranged with the owner of the soil to cut down the trees on his property as well as on the lighthouse lot, and he agreed to do so for twelve dollars, retaining the wood on his own lot. I found that the road to this station was almost impassible for a team, except in winter, I therefore further agreed with the owner that on condition of his removing the stumps, large rocks and grading the road satisfactorily, the Department would pay him twenty dollars and in addition he was to remove a fence and throw the corner of a field into the road: this was agreed to.

I regretted to find that two panes of the glass had been taken out, having been broken, and that two new panes of glass recently put in have also been cracked, one in several places. Either the heat of the lamps with the oscillation of the lantern or the expansion of the iron lantern, together with its contraction, must have broken the glass. I am inclined to the latter opinion, as I found on examining the windows that they had been set too firmly and fastened hard up against the iron frames, and puttied solid, and this again screwed hard against the glass. Whether the tender particularly specified hot this was to be set or not, I do not know, but it is evident that great care should be taken in this respect, and the instructions made so plain that no mistake could be made in the mode of setting the glass.

Some soft substance such as rubber should go between the glass and frame inside and out, so that it will yield to the expansion or other cause, to prevent the strain from breaking the glass. I do not attach any blame to the keeper. He is very desirous to have everything just as it should be, and is a very attentive and reliable man.

In 1902, the light was changed from catoptric to dioptric through the installation of a seventh-order lens. The lighthouse was automated in 1921 after an unwatched light was installed. The wooden tower was damaged by a lightning strike in 1956 and replaced by a red skeletal tower in 1957. The light was discontinued in 1970.

For a larger map of Midjik Bluff Lighthouse, click the lighthouse in the above map.