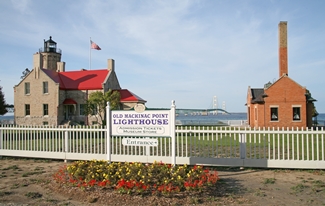 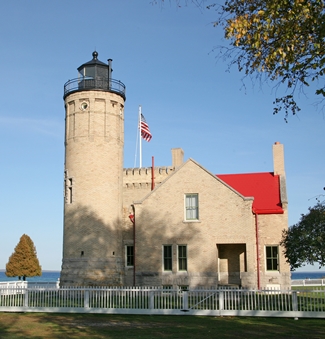 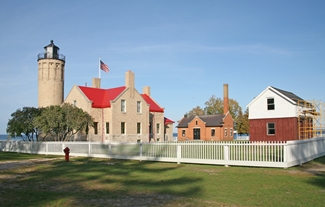 During the summer of 1838, Lieutenant James T. Homans sailed 1,825 miles on Lake Huron and Lake Michigan inspecting existing lighthouses and selecting sites for newly authorized lighthouses. As part of his trip report, Homans recommended a light near Mackinaw to mark the narrowest part of the Straits of Mackinac:

A beacon-light, near the town of Mackinaw, has my strongest recommendation; the large amount of commerce passing through the straits near there, calls for the protection and safeguard such a light would render. [That] the narrowest part of the strait is opposite this point of course increases the dangers to the navigation just there, especially in the night. My own experience, in many voyages through them, has acquainted me with the difficulty of finding this narrow pass, or entering the harbor of Mackinaw in the dark, without some such guide as a beacon, properly located, would afford. The western point of this harbor I deem the best site, because the land is considerably higher than on the eastern side, and commands a better range for vessels approaching from either east or west.

In 1837, Lieutenant Pendergrast had selected a site for the construction of Waugoshance Lighthouse to mark the western approach to the straits, but this lighthouse wasnt completed until 1851, the same year Cheboygan Lighthouse was built to help mark the southeastern entrance to the straits. The Lighthouse Board noted in 1865 that a lighthouse was needed near Fort Michilmackinac and selected McGuplin Point, a site two miles west of the fort, for its erection. McGulpin Point Lighthouse was placed in operation on June 18, 1869, but in 1888, the Board requested $25,000 to move McGulpin Point Lighthouse to Old Mackinac Point, just east of Fort Michilmackinac, stating that there the light would be visible to vessels approaching form either direction.

Construction of a light and fog signal at Old Point Mackinac was authorized by Congress on March 2, 1889, but only $5,500 was provided for a steam fog signal. A deed for the fog signal site was obtained in June 1890, and construction materials were landed on the point that same month. Work on the fog signal began on July 1 and was completed October 9, 1890. Installed in duplicate, the ten-inch steam whistle commenced operation on November 5, 1890.

When Congress authorized the construction of a lighthouse on Old Mackinac Point, it was with the provision that McGulpin Point Lighthouse be discontinued. The Lighthouse Board objected to the loss of one of its lights, and wrote: There is great doubt as to the expediency of this, and it is hoped that when appropriation is made for Mackinac Point, the provision for extinguishing McGulpins Point light will be stricken out. Mackinac Point is low and scraggy, with a natural elevation of not more than 6 or 8 feet above the lake, while McGulpins Point is 70 feet high and upward. If McGulpins Point light be retained, as will best serve the interests of navigation, Mackinac Point may be built, of a moderate power and elevation, and the cost of construction be considerably reduced.

Congress provided $20,000 for building a lighthouse on Old Mackinac Point on March 3, 1891, and the provision regarding McGulpin Point must have been removed, as it would remain active for several more years. Bids for supplying the metalwork and constructing the tower and dwelling and Old Mackinac Point were solicited. A contract for the metalwork was made on October 10, 1891, and the material was delivered to the lighthouse depot in Detroit on January 17, 1892, but no bids were received for erecting the tower and dwelling. This work was readvertised on March 19, 1892, and the lowest of six bids, $13,722 by John P. Schmitt of Detroit, was accepted.

Work on the lighthouse began in May 1892, and the following description of the effort was contained in the Lighthouse Boards report for that year:

The station consists of the lighthouse tower and keepers dwellings, the fog signal, the outbuilding or barn, and the oil house. The tower is a cylindrical brick shaft on a base of limestone ashlar. It is 13 feet 4 inches in diameter outside, 45 feet high to the gallery, and 50 feet to the focal plane. It is built of buff-colored brick, and is surmounted by a circular iron gallery and an octagonal fourth order lantern. The walls are constructed with air spaces, and the interior contains a circular iron staircase and a watchroom 8 feet 8 inches diameter at the top. The tower is connected with and forms the northwest corner of the keepers dwellings, from which it is separated by a service room, leaving an external entrance and porch. The dwelling, a two-story structure, is arranged as two separate houses under one roof. A lobby measuring 4 feet by 6 feet, adjoining the service room, gives access to both dwellings. The east dwelling contains a parlor, a dining room and a sitting room and kitchen on the first floor. The west dwelling contains a spare room, a living room, and a kitchen on the first floor, and each is provided with pantries and vestibules. Each has three bedrooms in the second story. The finish throughout is white pine, varnished, except the floors of the first story and the staircase and wainscoting, which are of hard wood. Each dwelling has a cistern in the cellar, and there is a good well in the rear, with a pump near the kitchen door of each house. The exterior of the building, as in the case of the tower, is of buff brick with base of ashlar and trimmings of Indiana limestone. The roofs are tin tiling, painted bright red.

The fog signal is just to the eastward of the dwellings and consists of a frame structure 22 by 40 feet in plan, covered with corrugated iron outside and smooth iron inside, and contains duplicate boilers and machinery, and 10-inch steam whistles.

About 54 feet south and to the rear of the dwelling there is a framed one and one-half story outbuilding, [a barn], 16 by 24 feet in plan, covered with boards and battens. The upper portion is shingled and the roof is covered with asphaltic slag.

The oil house, situated in the southeast corner of the light-house site, about 150 feet from the tower, is a circular iron structure capable of storing 360 gallons of mineral oil at a time, in 5-gallon cans.

The land on which the light-station at Old Mackinac Point stands consists of three lots, each measuring 50 by 170 feet, making in all a site measuring 150 by 170 feet, facing north towards the Straits of Mackinac. A road 40 feet wide runs in front of the reservation. The Government owns the beach on the north side of the road.

A fourth-order, revolving, Sautter, Lemonier & Co. Fresnel lens was installed in the lantern room and produced a red flash every ten seconds. The lens had ten flash panels and was revolved by a clockwork mechanism powered by a suspended weight that had to be wound up every three hours. The light was placed in operation on October 25, 1892.

After the station was finished, the Lighthouse Board noted that the fog signal was too close to the dwelling and needed to be moved fifty feet east. As the fog signal building was just 7½ feet from the stations eastern property line, this move required the acquisition of additional land. Mackinaw City owned the desired parcel, which it planned to use as a public park and refused to give it up. Condemnation proceedings were initiated in 1899, and three commissioners appointed to the case ruled that Mackinaw City should be awarded $400 for the land and $1,500 should be paid for damages to adjacent property. Objections were filed in December 1900, but the court took until 1904 to rule that just the $400 award to the city was justified.

Congress provided the compensatory $400 on March 3, 1905, and work on a new brick fog signal building began in May 1906. The boilers and whistles were transferred from the old building in time to be placed in operation in 1907. The old fog signal building was moved behind the new one and used for storage.

The signature of Old Mackinac Point Lighthouse was changed from flashing red to flashing white on September 1, 1913, the same time an incandescent-oil-vapor lamp was substituted for one that burned kerosene. These changes increased the lights candlepower from 1,100 to 26,000. In 1929, the illuminant was changed from oil vapor to electricity. A Cunningham air whistle was installed in the fog signal building in 1933, and in 1937 a radiobeacon was placed in commission at the station.

Two keepers, a head keeper and an assistant keeper, were assigned to Old Mackinac from 1890 until 1909, when a second assistant keeper was added to the station. The lighthouse only had four head keepers during its sixty-seven years of operation.

After eight years at Waugoshance Lighthouse, George W. Marshall was transferred to become the first head keeper at Old Mackinac Point. George was a veteran of the Civil War and one of five sons of William Marshall, longtime ordnance sergeant at Fort Mackinac, who became lighthouse keepers. In 1900, Georges brother Charles had his health affected in an incident where he became stranded in a boatswains chair while painting St. Helena Island Lighthouse. Charles was transferred to Old Mackinac Point after the incident to serve as his brothers assistant, and George E. Leggatt, who had been the assistant at Old Mackinac Point, took the place of Charles as keeper at St. Helena Island. Charles served at Old Mackinac Point for two years until his health deteriorated to the point that he had to be hospitalized at Northern Michigan Asylum in Traverse City.

George and Margaret Marshall never had any children of their own, but after Charles was institutionalized and Charles wife died, George and Margaret adopted some of Charles children. One of these, Chester, would later become a lighthouse keeper and serve at Manitowoc Lighthouse for nearly thirty years.

When George Marshall retired in 1919, his son James, whom George and Margaret had adopted in the 1880s and who had been serving as keeper at White Shoal Lighthouse, took charge of Old Mackinac Point Lighthouse. James served as keeper at the station until a stroke forced his retirement in 1940. In total, members of the Marshall family were in charge of the lighthouse for fifty years.

Henrik G. Olsen served as head keeper from 1941 to 1951, and he was followed by John P. Campbell, who was in charge of the station until 1957, when the lighthouse was made unnecessary and discontinued following the completion of Mackinac Bridge. Keeper Campbell was transferred to Point Betsie Lighthouse, where he served until his death in 1963.

A fundraising effort was launched in 1996 to raise $2.2 million to restore the lighthouse and reopen it to the public. One key member of this effort was Jim Belisle, whose great-grandfather, John P. Schmitt, built the lighthouse. In 2004, the lighthouse was reopened as a restoration in progress, and the following year the stations barn, which had been moved to a maintenance area in the 1960s, was returned to its rightful place behind the lighthouse. In 2007, 32,933 visited the lighthouse, many attracted by the opportunity to climb the tower for an unparalleled view of the Straits of Mackinac.

Located in Michilimackinac State park in Mackinaw City very close to the southern end of the Mackinac Bridge.
Latitude: 45.78749, Longitude: -84.72921

For a larger map of Old Mackinac Point Lighthouse, click the lighthouse in the above map.

Heading north on Interstate 75, take Exit 339, the last before the Mackinac Bridge. Turn left onto Nicolet Street and follow it to Michilimackinac Park where you will find Mackinac Point Lighthouse. The lighthouse is open daily from early May to early October from 9 a.m. until at least 4:30 p.m. Call (231) 436-4100 for more information.


It is often said that lighthouses are America's castles, and I can't think of another lighthouse in the U.S. where this is more true. From its rough-hewn limestone foundation, to the narrow, rectangular fenestration seen in both its cylindrical and square towers, to the crenellation atop some of its walls, Old Mackinac Point Lighthouse looks like it was built not just to light the straits but to defend them as well.