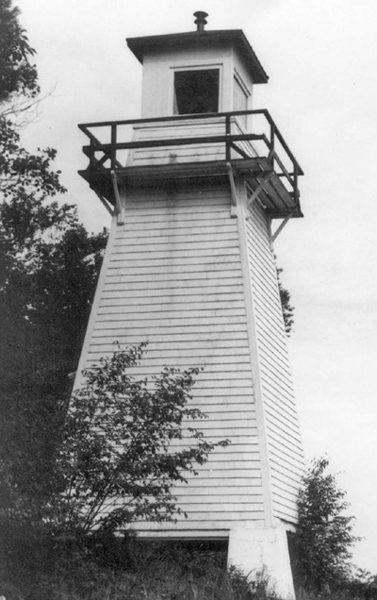 Beacon lights, constructed on the St. Croix River at Mark Point and Spruce Point in 1875, commenced operation on April 1, 1876. The two open-framework towers were twins, measuring 8.5 metres from base to vane and displaying a fixed white light. The towers were painted brown, while the lanterns were painted white. John Boyd was appointed the first keeper at Spruce Point at an annual salary of $80.

The evening of October 8, 1882 was dark and stormy. Keeper John Boyd was away from Spruce Point, leaving the light in the care of his wife, Kate, and daughter, Bertha (Bertie). Kate and Bertie were sitting in their home, when they heard anxious cries for help from two men who had been thrown from their capsized sailboat into the swirling, frigid waters of the St. Croix River. Instinctively, Bertie sprang into action, running down to the river and launching the stations boat. Rowing out into the river, she soon found the two men desperately clinging to their overturned craft. Bertie quickly assisted the younger gentleman into her rowboat, but it took a mighty effort to free the older, heavier man, who was entangled in the rigging, and pull him aboard.

In recognition of her heroic feat, Bertie was presented a gold watch by the Government of Canada and an accompanying chain by the Town of St. Stephen. The watch was inscribed in recognition of her humane exertions in saving life in the St. Croix River. The Department of Marine honored her efforts with the gift of a new rowboat, bearing the words Roberta Grace Boyd, Grace Darling of the Saint Croix on its stern. Bertie remained humble despite all of the attention, saying, Please dont speak of it. Indeed, I did nothing worth describing.

Bertie eventually became the official keeper of the light after her father passed away in 1892 from the effects of a bruise accidentally inflicted while at work with a drawing knife. John Boyd also worked as a pilot of the steamer Stroud, which ran on the Grand Manan route, and he was credited with saving more than a dozen lives while serving as keeper at Spruce Point.

A new abutment was built at Spruce Point in 1894, and new sills were placed under the tower. The bridge leading to the lighthouse was placed in good repair in 1896, and a new stone pier was built beneath the tower in 1898. Concrete boundary posts were erected at Spruce Poitn in 1916.

Red and white cylindrical towers replaced the wooden towers at Spruce Point and Mark Point in 1973 and served until the lights were discontinued in 2001.

For a larger map of Spruce Point Lighthouse, click the lighthouse in the above map.