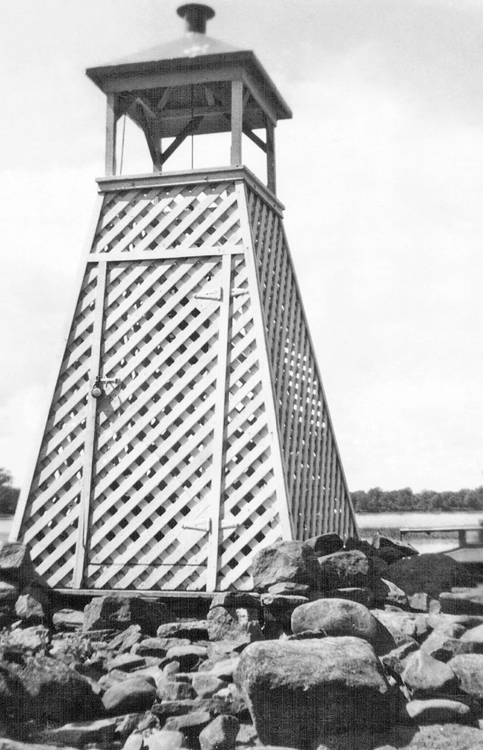 In its 1884 annual report, the Department of Marine noted the establishment of a new light on St. John River:

A fixed red dioptric light on the south side of the Lower Jemseg entrance, on the River St. John, in Queens County. This light is shown from a lantern hoisted on a mast and is elevated 34 feet above the ordinary level of water and should be visible 3 miles. The mast is 21 feet high and at its base is a shed painted white. It stands upon a timber pier built 30 feet back from the waters edge. This light is intended to guide vessels navigating the River St. John through the channel at the entrance to the Jemseg, and is a short distance above No Mans Friend light.

D.W. Clarke was paid $775 for building the light, and George Nevers was appointed the first keeper of the light at an annual salary of $80.

In 1899, a dioptric lens replaced the catoptric lamp formerly used as the illuminating apparatus, but the light remained fixed red as before. Messrs. Chance Bros. and Company of Birmingham supplied the new lantern with the dioptric lens for $103.

By 1938, a unique latticework tower had replaced the mast light.

For a larger map of Jemseg Lighthouse, click the lighthouse in the above map.