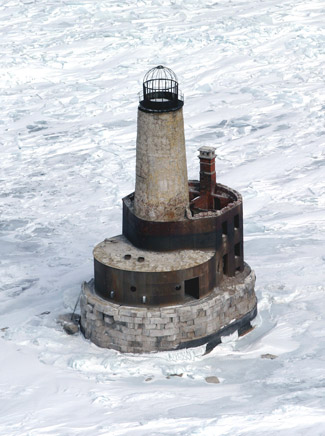 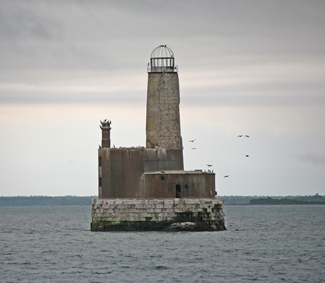 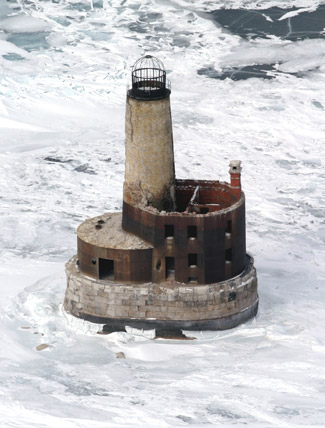 Long and narrow Waugoshance Point and the chain of small islands and reefs at its tip extend seven miles out into Lake Michigan from the northwest corner of Michigans Lower Peninsula and present a dangerous hazard for mariners. Congress appropriated $5,000 in March 1837 for a lighthouse at Waugoshance, which is a Native American word meaning Fox, and Lieutenant G. J. Pendergrast of the U.S. Navy was dispatched to investigate the site.

After examining the area and requesting input from persons of experience and intelligence familiar with the Straits of Mackinac, Pendergrast included the following in a report on his findings:

On turning to Point Wagooshance, I found there weremany strong objections to it as a site, growing out of its remoteness from the main channel, and the circumstance of a dangerous reef projecting out from the point to the distance of nearly half a mile. I soon satisfied myself that a light on that point would prove of but little service to vessels passing through this boisterous and difficult strait.

My attention was next directed to a small detached reef lying about half way between Point Wagooshance and the light-boat, say one mile and a half from each. This reef is only about fifty yards wide and two hundred long, running in the direction of the straits, and having from five to seven feet water upon it. Between this reef and the point, there is a channel one and a half mile wide, and two and a half fathoms deep. To the northward of the reef is the light boat channel, which is very deep, and from three to five miles wide. A light on the small reef spoken of I am persuaded would be placed in the most eligible position possible, and I am satisfied would be of more advantage to commerce than all the other lights on Lake Michigan taken together. I, therefore, beg leave to recommend that one be erected there without delay. When the light-house in question shall have been completed, the lightboat can be very usefully employed in the Maumee bay.

The Mackinaw Straits Lightship mentioned by Pendergrast had been established in 1832 and was the first and only lightship on the Great Lakes at that time. The lightship was useful most of the time, but it was difficult to keep its light burning during rough seas, and the ship could not be deployed in the spring and late fall on account of ice.

As the construction of an offshore lighthouse would cost more than the original appropriation, Congress provided $25,000 in 1838 for building a lighthouse on the ledge or reef near Wagooshance. Nothing, however, was done on the project until 1847, when the work was transferred to the Bureau of Topographical Engineers, and the sum of $25,000 was reappropriated. To this amount were added $38,365 in 1848, and another $20,580 in 1850, bringing the total cost of the lighthouse to $83,945.

Captain Augustus Canfield of the Corps of Engineers was placed in charge of constructing Waugoshance Lighthouse, and in 1847, the shoal, which was covered in four to twelve feet of water, was carefully sounded so the bottom of the wooden cribs that would serve as the foundation could be shaped to fit the rocks. In 1848, fifty-foot-square wooden piers were constructed on St. Helena Island out of white and yellow pine, and then towed fourteen miles to the shoal and filled with stone. Hollow squares were left in two of the cribs to provide room for foundations for the tower and keepers dwelling. In the hollows, the bottom of the crib up to the water level was filled with concrete, and atop this, large blocks of hammer-dressed Sandusky limestone set in hydraulic cement were used to form sixteen-foot-tall bases for the tower and dwelling that rose four feet above the deck of the crib.

During the 1849 work season, yellow Milwaukee brick was used to build a circular tower with a diameter of twenty feet at its base and fourteen feet at its top. A one-and-a-half-story, brick keepers dwelling was connected to the tower by a two-foot-long covered way. The residence measured twenty-two by twenty-nine feet and was fitted with a slate roof and copper gutters. The surrounding wooden pier measured ninety by a hundred feet, rose twelve feet above the water, and was covered with three-inch-thick oak planks.

In 1850, a spiral iron staircase was placed in the tower, and the lantern room and lighting apparatus were installed. Also that year, the interior of the keepers dwelling was finished, the pier decked, a boathouse and woodhouse built, a boat crane set up, and the fog bell hung. With this work complete, Waugoshance Lighthouse was ready to begin operation in 1851. An 1854 Light List shows that a fixed, third-order Fresnel lens was in use at Waugoshance, but by 1858 a fourth-order lens, which produced a flash every ninety seconds, had been installed.

Unlike the older lighting apparatuses with their multitude of lamps, the Fresnel lens used just a single lamp, so it was critical that this lamp remained lit. To alert the keeper if the lamp went out, Captain Canfield installed a copper tube that would contract as it cooled when the lamp was extinguished and, through the use of a couple of levers, start the fog bell ringing. This ingenious device was tested each morning when the light was put out.

By 1860, the wooden cribwork protecting the lighthouse required thorough renovation. The Lighthouse Board requested $11,385 for this work, but then after examining the situation more carefully, decided in 1865 that $200,000 would be required. To stress the need for the funds, the Lighthouse Board noted that the importance of Waugoshance Lighthouse was second to none in the lake region.

Work on protecting the lighthouses foundation began in 1867, when it was decided that a more permanent elliptical stone pier should replace the square wooden one. Excavation was carried down through the cribwork in an attempt to reach bedrock on which the stone pier could be built. By the end of 1867, workers inside an iron coffer-dam, built by Detroit Locomotive Works and equipped with an air lock, had chiseled away at the lake bottom to a depth of six-and-a-half feet below water. Noted engineer William Sooy Smith was in charge of the effort, which was the first time in the United States that the pneumatic process had been used in sinking a caisson foundation for a lighthouse. During the excavation, giant boulders, weighing up to four tons, were encountered, some of which blocked the edge of the coffer-dam. These rocks had to be undermined and drawn into the coffer-dam or drilled and split so the edge of the coffer-dam could continue downward. As stones were removed, they were placed in timber cribs atop the coffer-dam to help sink it.

After bedrock had not been reached at a depth of fifteen feet, excavation was halted in 1868. Using stone quarried at Marblehead, Ohio, most of the foundation pier was laid inside the coffer-dam in 1869. After the stone pier was completed the following year, a new dwelling for the keepers was built at a cost of $12,000.

In 1879, the Lighthouse Board noted that the station was entirely out of repair and requested $25,000 to reconstruct it and add a steam fog whistle. This sum was provided on August 2, 1882, and work at the station began on August 6, 1883. A work crew of thirty-nine spent nearly two months on the pier encasing the tower and dwelling in iron and erecting a fog signal house for duplicate ten-inch steam whistles, which went into operation on October 19, 1883. In May 1884, a new lens that illuminated the entire horizon was installed along with a new lantern room door, whose upper half was glazed so as to not obstruct the light.

A work party was dispatched to Waugoshance Lighthouse in 1893 to put a new roof on the dwelling and to paint the tower and dwelling in horizontal red and white bands. The characteristic of the light was changed in 1894 from a white flash every ninety seconds to a white flash every forty-five seconds. The flashes were produced by two flash panels that revolved around a fixed, fourth-order Henri-Lepaute Fresnel lens. A large, square concrete protecting pier was added in 1896. For this effort, a stone crushing plant and depot were established on St. Helena Island.

A head keeper and two assistants were needed to operate Waugoshance Lighthouse and its fog signal. Two head keepers perished while serving at Waugoshance Lighthouse. Thomas Marshall drowned in 1886, and John Herman perished in 1900. Legend has it that Herman locked an assistant keeper in the lantern room as a practical joke, and when this keeper finally managed to escape, Herman was nowhere to be found. It is believed Keeper Herman, who was known for his drinking, must have fallen into the lake. Unexplained events at the lighthouse were forever after attributed to the ghost of John Herman.

Another tale often told of Waugoshance Lighthouse involves assistant keeper James Davenport, who was supposedly alone at the station when smoke from the Great Peshtigo Fire of 1871 reduced visibility in the straits. In one account, Keeper Davenport reportedly tolled the fog bell nonstop for three days by placing pots and pans on his lap that would clatter to the ground in case he dozed off. A different version of the story has Keeper Davenport hosting the crew of a schooner that had run aground on the reef and entertaining them with his violin.

In August 1943, during the midst of World War II, the navy took control of several islands in northern Lake Michigan, including those off Waugoshance Point, for training naval task forces. The lighthouse thus became part of a bombing and gunnery range for Naval Air Station Traverse City, and during the following years, the structure was bombed and strafed by pilots. One assault on the lighthouse reportedly resulted in a fire that thoroughly charred the structure.

In 2009, Waugoshance Lighthouse, deemed excess by the Coast Guard, was offered at no cost to eligible entities, including federal, state, and local agencies, non-profit corporations, and educational organizations under the provisions of the National Historic Lighthouse Preservation Act of 2000.

Michigans lighthouses have long been an unmistakable marker of Michigans identity, Senator Levin said. Although they are no longer used as navigation tools, they are a testament to our states maritime history and important sources of tourism. Under the care of these local historical societies, these three lighthouses will be enjoyed by generations of future Michiganians and visitors.

In January 2021, the board of directors of Waugoshance Lighthouse Preservation Society decided to disolve the non-profit organization after determining that the lighthouse could not be saved. With record-high water levels eroding the base of the lighthouse, the group had received a quote of over $300,000 for the installation of a temporary fix that would protect the lighthouse for only a year or two. The society notified the National Park Service and Michigan State Historic Preservation Office of the need to remove salvagable items, like the birdcage lantern room and metal plating, for display at museums, but the government agencies felt the lighthouse could still be saved and suggested another group should take over the preservation efforts.

For a larger map of Waugoshance Lighthouse, click the lighthouse in the above map.

Waugoshance Lighthouse is best viewed by boat or from the air. As the waters surrounding the light are treacherous only distant views are advisable by boat. Westbound lighthouse cruises offered by Shepler's pass by the lighthouse.