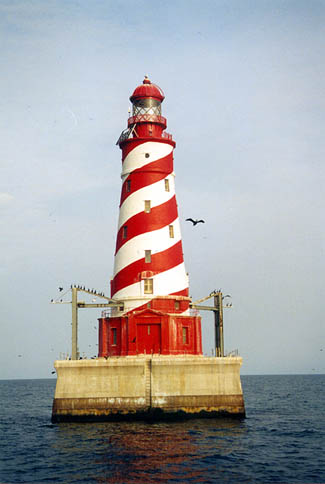 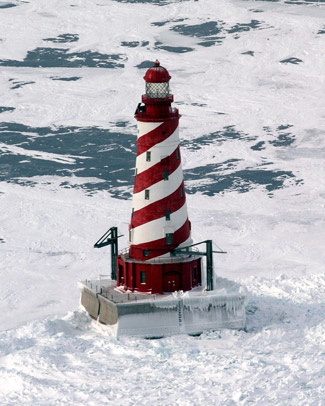 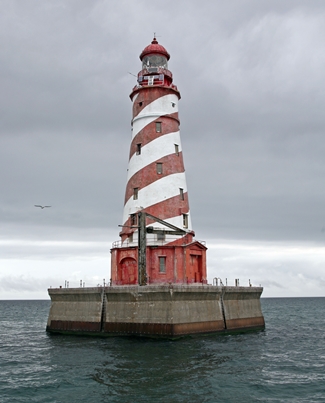 Waugoshance Lighthouse was established in 1851 to help mark the entrance to Lake Michigan from the Straits of Mackinac, but navigational hazards lurked unseen in the waters north of the lighthouse. Four-and-a-half miles northwest of Waugoshance Lighthouse lies White Shoal, covered by just five feet of water, and another five miles northwest of White Shoal is Simmons Reef just three feet beneath the surface of the lake. Congress appropriated $60,000 for a lighthouse on Simmons Reef on March 2, 1889 to help vessels traveling between the Straits of Mackinac and Green Bay, but a survey of the reef conducted that year showed that a structure on the exposed location could not be built for less than $150,000. The Lighthouse Board requested an additional $90,000 for the project, but in order to more immediately serve mariners, the board also recommended that the $60,000 already approved be used to construct three lightships to mark Simmons Reef, White Shoal, and Grays Reef. Congress approved this reallocation of funds on March 3, 1891, and three 100-foot-long, wooden-hulled lightships, equipped with steam propulsion and a fog signal, were built that year by the Blythe Craig Shipbuilding Company of Toledo, Ohio. After sea trials were conducted and defects corrected, the three lightships were taken in tow by the tender Dahlia and placed on their respective stations on October 24, 1891.

LV-55 served on Simmons Reef through 1900, with Samuel Dodd serving as its master for fifteen years. Captain Dodd capsized in a small boat near the lightship in 1894 and was in the water for three hours before being rescued by the schooner City of Sheboygan. At the opening of the 1901 shipping season, a buoy was placed on Simmons Reef, and LV-55 was assigned to Lansing Shoal.

On March 4, 1907, Congress appropriated $250,000 for a light and fog signal to replace lightship LV-56 serving at White Shoal. After plans were drawn up, the project was put out to bid, and a $93,785.60 contract was awarded to Gillen Construction Company of Milwaukee, the lowest bidder for the foundation.

Work on the shoal began in May 1908, and that summer the rock was leveled, and 400,000 square feet of timber cribbing was anchored atop the shoal using 3,700 cubic yards of concrete and 4,000 tons of rock. A reinforced concrete pier that extended to twenty feet above the lake was built on the cribbing to support the steel and concrete lighthouse. A skeletal frame tower was erected atop the pier at the close of the 1908 season for displaying a temporary acetylene light to mark the obstruction.

During the 1909 work season, the pier was completed, and the exterior of the tower, save the lantern room, was erected. A temporary light and fog signal were maintained on the uncompleted structure from the opening of navigation in 1910 until the official light was established on September 1, 1910, which allowed the lightship used at White Shoal to be reassigned to North Manitou Shoal for the 1910 season.

The following detailed description of White Shoal Lighthouse was provided in the 1912 Annual Report of the Commissioner of Lighthouses:

Purpose.White Shoal Light Station was established for the reason that a more efficient aid to navigation was required to mark the shoal than the light vessel which it replaced. On account of ice the vessel was always withdrawn in the fall before navigation had fully closed and replaced in the spring after it had opened, so that the unmarked shoal was a serious menace during two inclement seasons of the year when the movement of vessels was at its height. The light was established September 1 and the fog signal September 15, 1910, and the submarine bell September 20, 1911.

Site.The station is located on the east end of the shoal, northeasterly end of Lake Michigan and off the westerly entrance to the Straits of Mackinac. The site is submarine, with 22 feet 6 inches depth of water; the surface of the shoal is practically level and consists of coarse gravel, the largest pieces not exceeding 4 inches in diameter. Borings indicate no clay or mud, and stone or solid bottom was struck at 20 to 23 feet below the surface.

Structure.The structure consists of a timber crib 72 feet square and 18 feet 6 inches high filled with stone, and supports a reenforced-concrete pier whose deck is 70 feet square and 20 feet above lake level. The sides of the pier are battered, with a plain curved molding at the top. The crib was built on shore, floated out to the site, and sunk upon the bottom, which had previously been covered with a layer of stone 2 feet thick. After the crib was placed, riprap to a depth of 9 feet above bottom and 118 feet square was deposited about it. The deck of the pier supports an ornamental cylindrical base for a conical-shaped tower surmounted by a cylindrical service room, watch room, and first-order helical-bar lantern whose focal plane is 105 feet above the deck of the pier. The tower is of structural steel, backed with brick and faced with terra cotta, with certain cast-iron parts and trimmings and with gallery deck, watch room, and lantern made of aluminum.

Illuminating apparatus.Consists of a second-order flashing lens of two panels each, made up of 7 refracting and 15 reflecting prisms, rotating on a mercury float, driven by clockwork, and giving a white flash every 8 seconds. The intensity of the light is estimated at 1,200,000 candles, the focal plane is 125 feet above mean lake level, and the light is visible 20 miles in clear weather. The light is furnished by a 55-millimeter double-tank, incandescent oil vapor lamp. The mineral oil is stored in tanks in the basement of the tower and raised to a tank on the eighth floor by a suitable pump.

Fog signal.The aerial fog signal is a 6-inch whistle blown by compressed air. The compressing plant consists of two 24-horsepower vertical petroleum engines and compressors on the same bed direct connected to the same shaft, but are to be replaced next spring by two 40-horsepower horizontal oil engines and compressors direct connected on the same bed. There is also a submarine fog signal consisting of a bell mounted on a tripod and located three-quarters of a mile northeast of the station in 60 feet of water. The bell is operated by electric power, the current being transmitted through a cable from the light station.

Quarters.There are four keepers at this station. The tower is 9 stories in height, including the cellar in the interior of the pier, which contains the oil tanks. Above this is the first floor, on level with deck of pier outside, containing rooms for the fog-signal machinery, heating plant, stores, closets, and power boat. On the second floor are tool room, bathroom, and kitchen storeroom. The third floor contains kitchen, living room, and a bedroom; the fourth floor, two bedrooms, toilet, etc.; the fifth floor, a bedroom and general sitting room; the sixth and seventh, one large room each; and the eighth contains the service room, which is immediately below the watch room of the lantern. The stairs are not centrally located, but are amply provided for near the outer walls of the tower. Supplies are landed directly on the pier from the tender, and the keepers power boat is stowed within the tower in a corridor on the first floor and the rowboat on the pier outside.

Cost.The station was established under the act of March 4, 1907, appropriating $250,000. The total cost was $224,563.83. The crib and pier were built under contract, but the tower was constructed by hired labor and purchase of material under contract. The work was commenced in July, 1907, with the survey, and was practically completed in November, 1911.

The stations first keeper was Ingvald Olsen, who was awarded the lighthouse efficiency pennant for have the districts model station in 1914. When Keeper Olsen was transferred to Sheboygan, Wisconsin in late 1914, James Marshall took charge of the station, and the following year, he and third assistant John Sullivan were credited with saving the launch Ida L during a gale.

The stations fog signal was changed from a six-inch to a ten-inch air whistle on April 22, 1914. In December 1914, an auxiliary flashing acetylene winter light was installed to aids mariners between the time the station closed and the actual close of navigation. The submarine fog signal was discontinued at the end of the 1916 season, and air hoists were placed on the stations three boat cranes in October 1919. An additional motorboat was given to the station in 1920.

When originally built, White Shoal Lighthouse had a daymark described as a white tower with a narrow black band at a height of thirty-eight feet above the water and a silver-gray lantern, but this was changed in 1927 to a black tower with a silver-gray lantern. In 1937, the tower was changed back to white. This photograph, taken on April 6, 1956, shows the distinctive red and white spiral bands that the tower had received in 1954. On May 28, 1938, the stations fog signal was changed from an air whistle to a diaphragm horn that sounded two blasts every forty-five seconds.

White Shoal Lighthouse was automated and its crew removed in 1976, the same year the nearby offshore lights at Lansing Shoal and Grays Reef were de-staffed.

Though a lengthy boat ride is required to get a close-up view of White Shoal Lighthouse, you can view its beautiful second-order Fresnel, removed from the tower in 1987, at Great Lakes Shipwreck Museum at Whitefish Point. Residents of Michigan can order license plates featuring the iconic red-and-white-striped lighthouse set against and blue background. A portion of the cost of the plates goes to the Michigan Lighthouse Preservation Grant Fund, which provides money to support lighthouse groups throughout the state.

In May 2014, White Shoal Lighthouse, deemed excess by the Coast Guard, was made available under the guidelines of the National Historic Lighthouse Preservation Act to eligible entities defined as Federal Agencies, state and local agencies, non-profit corporations, educational agencies, or community development organizations, for education, park, recreation, cultural, or historic preservation purposes. When a new custodian was not found, the General Services Administration initiated an online auction for the lighthouse on July 15, 2016 with an opening bid of $15,000. Five bidders participated in the auction, which ended on September 25, 2015 with a high bid of $110,009.

For a larger map of White Shoal Lighthouse, click the lighthouse in the above map.

This light must be visited by boat or viewed from the air. Westbound lighthouse cruises offered by Shepler's pass by White Shoal Lighthouse, as do tours offered by Bonadeo Beaver Island Boat Charters.