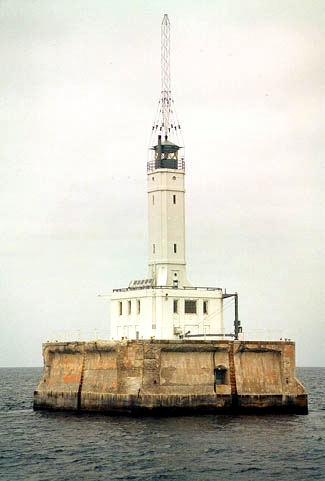 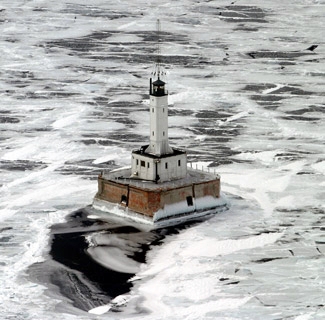 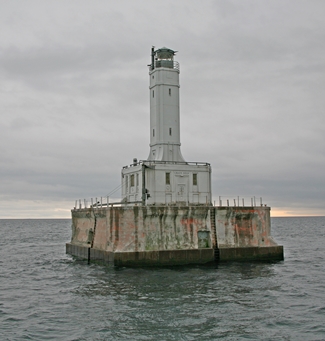 Grays Reef Passage, a narrow channel in the northeasterly end of Lake Michigan that runs between Grays Reef on the west and Vienna Shoal on the east, is the only navigable opening for deep-draft vessels between the Straits of Mackinac and the waters east of Beaver Island and the Manitou Islands. In its 1869 annual report, the Lighthouse Board noted the danger to navigation presented by Grays Reef:

These reefs are situated in the northern end of Lake Michigan, 6 miles due west from Waugoshance light-house, and consist of several rocky patches upon which there are but 5 feet of water. They are much dreaded, and probably have been the cause of a greater number of disasters than any other of the many dangers in this locality. It is proposed to mark these reefs by a first-class iron buoy, placed on the eastern side, in 16 feet [of] water.

A buoy was anchored on the reef as recommended by the Lighthouse Board, but a more substantial navigational aid was later deemed necessary. On March 2, 1889, Congress appropriated $60,000 for establishing a light and fog signal on the reef, and the same amount for a similar structure on Simmons Reef, a few miles to the north. As these lighthouses would require more than double the appropriated amount, the Lighthouse Board asked that the amount earmarked for Simmons Reef be used to construct lightships for Simmons Reef, White Shoal, and Grays Reef. Congress authorized the reallocation of the funds on March 3, 1891, and three 100-foot-long, wooden-hulled lightships, equipped with steam propulsion and a fog signal, were built that year by the Blythe Craig Shipbuilding Company of Toledo, Ohio. After sea trials were conducted and defects corrected, the three lightships were taken in tow by the tender Dahlia and placed on their respective stations on October 24, 1891.

On November 17, 1891, Grays Reef Lightship, LV-57, left its station without orders and put in to Cheboygan. The crew was discharged for dereliction of duty and replaced by one more trustworthy, and the lightship was placed back on station by the tender Dahlia. LV-57 faithfully served on Grays Reef until 1923, when she was retired from duty and replaced by LV-103. In 1930, a radiobeacon was installed on Grays Reef Lightship, and the illuminant used by the ship was changed to electricity, increasing the intensity of the light.

In 1934, work began on replacing the lightship with a permanent structure. The site selected for this lighthouse was considerably south of the lightship and somewhat to the east, where it could mark a new 3,000-foot-wide channel that would be excavated through the reef in 1936. A sixty-foot-square timber crib with a depth of twenty-four feet was constructed at St. Ignace by R.C. Durcoher of Detour for $6,900 and then towed to the site and sunk on September 3, 1934. Nine of the cribs twenty-four outer pockets were filled with concrete and the rest with temporary ballast stone to hold the structure in place during the winter. The following spring, the temporary stone was removed, and the outer pockets were filled with concrete, while the cribs twenty-five interior pockets were filled with stone.

A six-foot-thick concrete slab was poured atop the crib to serve as the basement floor for the superstructure. The basement, which has six-foot exterior walls and is topped by the main deck slab, housed the electric generating equipment, batteries, fog signal engines, heating plant, and radiobeacon equipment. The lighthouse itself is of steel construction, lined with concrete blocks, and contained living quarters for the keepers in the upper floor of its twenty-nine-foot-square base. A square, steel tower of narrower proportions emerges from the center of the base, enclosing a series of flights of stairs that lead to the circular, helical-bar lantern room that surmounts the lighthouse.

A third-and-a-half-order Fresnel lens, illuminated by an electric bulb, produced an occulting red light with 13,000 candlepower that was on for four seconds and off for two seconds. The lighthouses original fog signal, a diaphragm horn actuated by compressed air, sounded a two-second blast every twenty seconds, and the stations radiobeacon transmitted a dash-dot-dot-dash signal on 296 kilocycles. The lighthouse was scheduled to be completed by July 1, 1936, but difficulties experienced by the contractor required the rest of the working season to complete the project. Grays Reef Lighthouse was placed in commission on April 1, 1937, allowing Grays Reef Lightship, LV-99, the last lightship on Lake Michigan, to be decommissioned.

Grays Reef Lighthouse was built using the same design employed at Minneapolis Shoal Lighthouse, which was under construction at the same time. The total cost for the lighthouse, built by Greiling Brothers of Green Bay, Wisconsin using funds from the Public Works Administration, was approximately $220,000.

The lighthouse had a room that served as the galley, dining room, recreation room, and living room, and off this were two small rooms with bunk beds for the crew. Elwood Wade was in charge of the station in 1966, and members of his four-man crew would typically work three weeks on followed by a week off. Life was pretty routine at the station, but on the night of May 6, 1965, the men were watching Ben Casey on TV when they heard a big bang, like someone had thumped a table. The crew knew ships were in the area as they could hear their whistles, but they were surprised to discover that the 504-foot freighter J.E. Upson had rammed the lighthouse. The collision chipped some concrete off the crib and crushed some handrails, but the sturdy lighthouse didnt even shudder from the impact. Visibility at the time was between zero and 250 yards, and the stations light, fog signal, and radiobeacon were all in operation. The Upson, northbound on the lake, suffered a ruptured bow stem, but managed to back off and make its way to Mackinaw City before taking on too much water.

There were no mice on the lighthouse, but one day Elwood Wade was startled to find a four-foot water snake that had somehow made its way up into the structure. Though the men sometimes played table tennis and cards, they spent most of their leisure time watching TV. A twenty-four-hour watch was kept in the radio room, with crewmen serving six-hour shifts. Each man did his own laundry in a washing machine located in the basement, but the crew took turns cooking. The cook always washes his own dishes, said Dan Discianno. That way he doesnt dirty so many.

During the first week of October 1976, the Coast Guard Cutter Buckhorn removed the final crew from Grays Reef Lighthouse, forty years after the structure was completed. An electronic fog detector and other gear had earlier been installed in the lighthouse to allow it to operate automatically, powered by generators in the basement. With the automation of the lighthouses at Lansing Shoal and White Shoal having been completed earlier in the year, Grays Reef Lighthouse was the last manned offshore station in northeast Lake Michigan. The Fresnel lens that served in the lighthouse is on display at the Harsha House Museum in Charlevoix.

Leon F. DeRosia served as officer-in-charge of Grays Reef Lighthouse for a couple of years in the 1950s, and when he took a boat tour with Great Lakes Lighthouse Keepers Association that visited several offshore lighthouses in Lake Michigan, including Grays Reef, in September 1985, he thought it would be a bittersweet homecoming. I knew it would make me sad, DeRosia said. I know they cant keep everything, but this is our history. Not all of our history was fighting and wars. Some of it was peaceful. This is the peaceful part.

Discipline and life on a remote lighthouse could be difficult according to DeRosia. The monotony was terrible. You had to occupy the mens minds. We cleaned because if you didnt keep em busy, youd cart em off in stretchers. Theyd start thinking about their wives  who probably werent sitting at home waiting for them  and theyd crack up.

The best part was winter, DeRosia noted. In winter, you could leave the light, go home and forget about the whole place until March when they made you go back.

The radiobeacon tower was removed from atop the lighthouse in August 2010.

On May 1, 2013, the General Services Administration announced that Grays Reef Lighthouse was excess to the needs of the Coast Guard and was being made available at no cost to eligible entities defined as federal agencies, state and local agencies, non-profit corporations, educational agencies, or community development organizations, for education, park, recreation, cultural, or historic preservation purposes. Interested entities were given sixty days to submit a letter of interest. When a new custodian was not found, the General Services Administration initiated an online auction for the lighthouse on July 15, 2016 with an opening bid of $10,000. Four bidders participated in the auction, which closed on October 13, 2016 with a high bid of $52,777. Bobby Sager, the owner of Boon Island Lighthouse in Maine and Minots Ledge Lighthouse in Massachusetts, was the high bidder for Grays Reef.

For a larger map of Grays Reef Lighthouse, click the lighthouse in the above map.

The Fresnel lens from the lighthouse is on display at Harsha House Museum in Charlevoix.