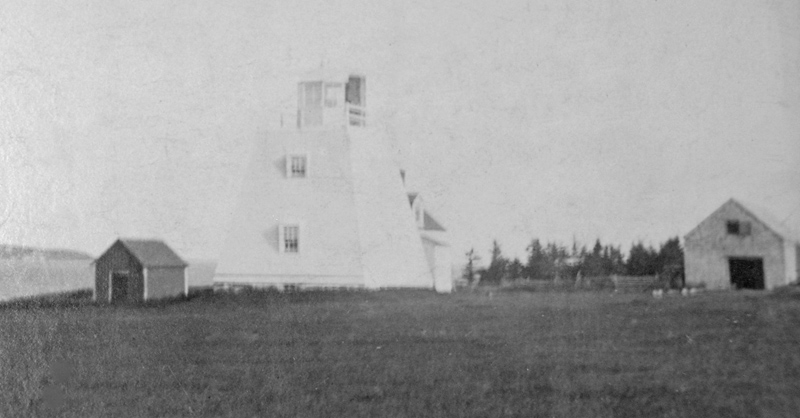 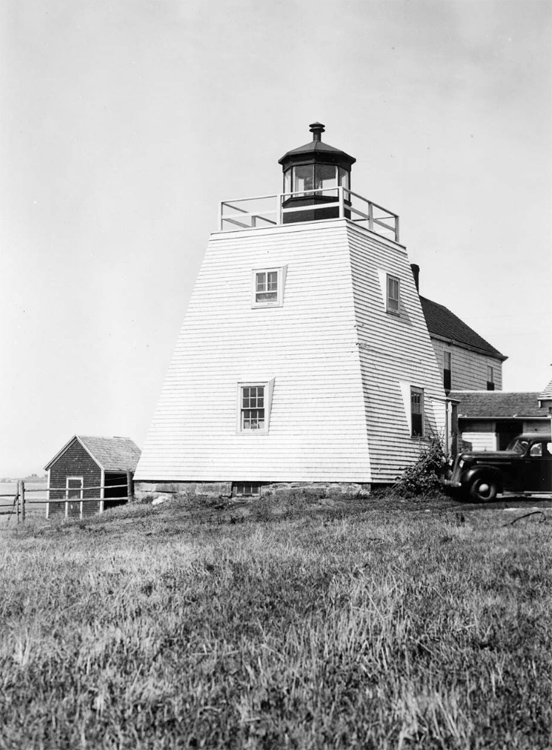 The community of Port Hood is located just south of the westernmost point of Cape Breton. A mile offshore from Port Hood lies Port Hood Island, and a mile south of it, is triangular Henry Island. Spacious St. Georges Bay is situated between the western portion of Cape Breton and the Nova Scotia mainland, and its southern end leads to the Strait of Canso.

In March 1853, the government of Nova Scotia allocated a sum not to exceed eight hundred pounds, in addition to the balance remaining undrawn from the grant for a similar service last year, for the construction of lighthouses at four places:

Work on these four lighthouses began in 1853, and most of them were completed within the year.

In 1857, William Condon included the following on Port Hood Lighthouse in his Superintendents Report on Light Houses for 1857:

Character of light - A white fixed light to the southward and westward, and a fixed red light to the northward. Has four catoptric lamps, with reflectors, in use, and occasionally, in dark and stormy weather, uses an extra A lamp or two. This light is discontinued when the ice closes the North Bay, and is re-lighted at the opening of navigation in the spring. The building is square and painted white.

Arrived at this place the 30th June, landed stores, and inspected establishment. I found everything in good order, and the light house and premises having the appearance as well as the name of being well kept. The building is the same size as that at Whitehead, and also used as a light house and dwelling. The keeper has also here to put the oil in the cellar or kitchen. I would strongly recommend that a small addition be made to this building next season.

Thomas Power was appointed the first keeper of Port Hood Lighthouse in October 1853, and in 1859, it was reported that his family was suffering from the want of an addition to the lighthouse. The cellar kitchen was described as damp and cold and believed to be the cause of the ill health experienced by the Power family. An addition to the lighthouse was finally constructed in 1862.

A report in 1878, noted that the uncertain water supply at the station was a great discomfort to the Thomas family. A water cistern was recommended, as a well was not possible due to a substratum of coal.

Keeper Thomas died in 1880, after twenty-six years of service at Port Hood Lighthouse. John A. McDonald replaced Thomas as keeper and was in charge of the light for more than thirty years. In 1900, an addition to the keepers dwelling, measuring twenty-five feet long by fourteen feet wide, was constructed. A new chimney was also built at this time, and a new floor was laid in the kitchen.

In 1910, Port Hood Lighthouse was changed from a fixed white light to an occulting white light that was visible for twenty seconds and then eclipsed for ten seconds. The red sector in the light was discontinued with this change.

In 1950, an enclosed wooden tower was placed on the shore, 967 yards north of the village wharf to display a rear range light. A skeletal tower on the wharf was displaying the companion front range light in 1963 for what was known as the Port Hood Range. A pole light had been marking the outer end of the wharf at Port Hood for several years before the small wooden tower was added in 1950 to display a rear light that aligned with the wharf light.

For a larger map of Port Hood Lighthouse, click the lighthouse in the above map.