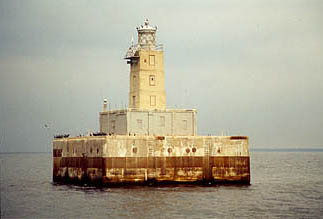 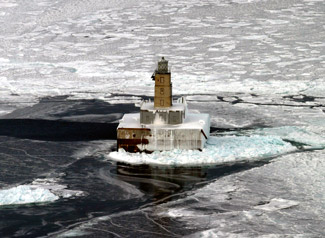 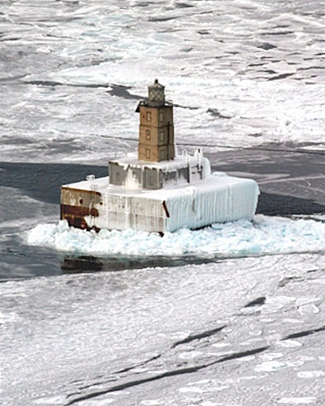 A lighthouse was established on Squaw Island in 1892 to guide mariners along the northern shore of Lake Michigan, and in 1901 lightship LV 55 was anchored on Lansing Shoal, a few miles north of Squaw Island. Mariners were informed to pass south of the lightship to remain safely in the channel that led from the Straits of Mackinac to the western side of Lake Michigan. In 1908, the Lighthouse Board made the following request for funds to replace Lansing Shoal Lightship with a permanent structure:

Lansing Shoal is located northeasterly from Squaw Island about 4 ⅝ miles, and bounds on the northward the narrow passage through which pass east or west bound vessels between the Straits of Mackinac and the northern part of Lake Michigan. The shoal consists of a number of detached shallow spots, with depths less than 20 feet (the shallowest water shown on the chart is 17 feet, and it is probable that there are spots shoaler than this).

The present aids to navigation consist of 2 fixed red lantern lights and a steam fog-signal, exhibited from a light-vessel moored in 33 feet of water.

The number of vessels passing by Lansing Shoal is constantly increasing. In the late fall and early spring, when navigation into Lake Superior is closed on account of ice, there are periods when vessels may still enter Lake Michigan from the lower lakes, and there is a considerable augmentation of coal shipments to Lake Michigan during these periods. It is impossible to leave on station the lightvessel at Lansing Shoal until the Straits of Mackinac are closed by ice, and in the spring it is impracticable to have the vessel back on her station before the rush of vessels to Lake Michigan begins. For the reasons stated it is believed that a light and fog-signal station should be established on Lansing Shoal.

On account of the exposed position, and the depth of water at the proposed site, it is estimated that the cost of the structure recommended will be $250,000, and the Board recommends that an appropriation of that amount be made therefor.

The Lighthouse Board repeated its request in 1909, and then in 1919, the Bureau of Lighthouses justified the high price tag for the still-not-built lighthouse by explaining that approximately 5,000 vessels passed the lightship each season and that the establishment of a permanent structure on the shoal would replace not only the lightship with its sizeable crew but also the fog signal on Squaw Island, with its three keepers. An unattended acetylene light would be placed in Squaw Island Lighthouse, once a permanent light was established on Lansing Shoal. The Bureau of Lighthouses noted further that Lansing Shoal was the most important point on the northerly passage to and from the Straits of Mackinac, and that Maritime interests were urgent in their requests for a better light and a more adequate fog signal, located on a fixed crib, to mark the hazard.

Eighteen years after the initial request for funds, Congress finally appropriated $90,000 in 1926, which allowed work on the site to begin that year. A wharf and storage warehouse were built on the north shore of Lake Michigan at Cozy Point, near Scott Point, while four concrete caissons for the submarine foundation were fabricated at the United States Engineers Caisson Plant in Milwaukee. The lighthouse tenders Sumac and Hyacinth each took two of the 500-ton caissons under tow and covered the 250 miles to the site at the rate of three miles per hour. To prevent water from entering the caissons during transit, plank covers were bolted to their open tops, which floated six feet above the lake.

The caissons, each of which measured fifty-four feet long by twenty feet wide and had a height of twenty-one feet, were sunk in twenty-five feet of water on July 24, 1927 to form a hollow square with outside dimensions of seventy-four feet and inside dimensions of thirty-four feet. The bottoms of the caissons, which rested atop an apron of riprap, were connected together using one-and-a-half-inch rods that spanned the hollow space and were imbedded in a two-foot-thick concrete slab.

The hollow portion of the foundation was filled with seven-inch stone delivered by the self-unloading steamer T.W. Robinson, and then the whole structure was covered by a seven-foot-thick, reinforced concrete slab, which formed the floor of the basement for the lighthouse. The seventy-four- foot-square concrete slab was poured in October and November of 1927, and work for the season was suspended on December third of that year, after a temporary light and steam fog signal were established on the incomplete structure.

Work at the site resumed April 19, 1928, with the contractor placing thirty-inch thick walls on the margins of the concrete slab to create a basement that was topped by the twelve-inch-thick main deck slab, supported by steel columns. The basement contained space for diesel generators, the fog signal machinery, a steam heating plant, coal and oil storage, and four bedrooms and a bathroom for the keepers. The bedrooms were separated from the machinery rooms by a ventilated hallway, and numerous twenty-four-inch circular port lights provided light for the basement. Storage tanks for oil and gasoline were buried in the concrete slab that formed the basement floor.

The main deck stood twenty feet above the lake with a one-story, thirty-seven-foot-square building at its center above which rose the three-story tower, topped by a third-order lantern room. The one-story building contained a boat room and a large common room that served as a dining room, living room, and watch room. A type F compressed-air diaphone was housed in the upper story of the tower, and a third-order Fresnel lens, illuminated by a 500-watt electric lamp, was installed in the lantern room at a focal plane of sixty-nine feet. Two skeletal steel towers were located at the northwest and northeast corners of the main deck to support the radio beacon antennas, and a boat derrick, operated by compressed air, provided access to the station.

The lighthouses navigational aids were placed in operation on October 6, 1928, allowing for the withdrawal of the lightship on that date. The T. L. Durlocher Company of Detour, Michigan was responsible for the foundation and concrete superstructure, and the total cost for the station as of July 31, 1929 was $261,765.

The crew of the lightship was likely more than happy to bid adieu to Lansing Shoal as during the previous summer the vessel had twice been struck by passing steamers, which damaged the vessel and endangered the lives of its crew. Both collisions occurred in thick weather during daylight hours, but the lightships active radiobeacon and fog signal should have been enough to keep the steamers at bay. Another vessel, the Sonora passed between the lightship and the new crib that was being built 400 feet north of the lightship.

Early in the morning of September 9, 1993, Lansing Shoal Lighthouse received an unexpected visit from a steamer, when the 1,000-foot steamer Indiana Harbor plowed into the structure at full speed in clear conditions. The collision, which ripped open a fifty-square-foot hole in the vessel that required more than $1.9 million in repairs, was blamed on the inattentiveness of those on duty in the freighters pilothouse. The damaged to the lighthouse was assessed at just over $100,000.

One of the worst storms in recorded history struck Lake Michigan on November 11, 1940, claiming five vessels and the lives of sixty-six sailors. Winds reached peak velocities of over 100 miles per hour and stirred up mountainous waves on the lake. Portholes in the basement of Lansing Shoal Lighthouse were broken out, and the resulting inrush of water flooded the stations machinery and took it out of commission. During another storm in early December 1929, spray from the storm-tossed lake froze on the lighthouse, forming a coating of ice several inches thick that blocked all exits. The crew was sealed inside for three days but was well stocked with supplies. The men serving aboard the lighthouse were typically taken off in mid-December, and an automated winter light was displayed until the crew returned the next spring.

According to the 1940 census, the four men assigned to the station that year were: Guy L. Gordon, William A. Keller, Henry Richileau, and Paul Johnecheck.

In 1976, Lansing Shoal Lighthouse was automated, and its last crew removed. The stations Fresnel lens remained in service until 1985, when it was dismantled and later placed on exhibit at the Michigan Historical Museum in Lansing. It seems appropriate that the lens that warned mariners of Lansing Shoal for fifty-eight years found a new home in a city named Lansing.

In May 2014, Lansing Shoal Lighthouse, deemed excess by the Coast Guard, was made available under the guidelines of the National Historic Lighthouse Preservation Act to eligible entities defined as Federal Agencies, state and local agencies, non-profit corporations, educational agencies, or community development organizations, for education, park, recreation, cultural, or historic preservation purposes. When no custodian was found, the General Services Administration initiated an auction for the lighthouse on July 25, 2017. Three bidders particpated in the auction, which ended on November 9, 2017 with a high bid of $26,000.

For a larger map of Lansing Shoal Lighthouse, click the lighthouse in the above map.

This light must be visited by boat or viewed from the air. Fresh Air Aviation offers Lighthouse Air Tours that allow aerial photographs of this lighthouse, and Bonadeo Beaver Island Boat Charters offers boat tours to the lighthouse.

The third-order Fresnel lens from the Lansing Shoal Lighthouse is on display at the Michigan Historical Museum in Lansing.