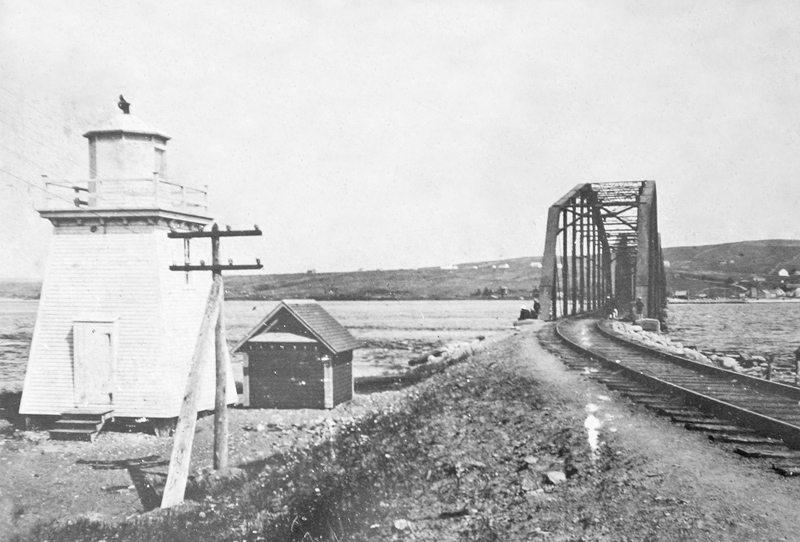 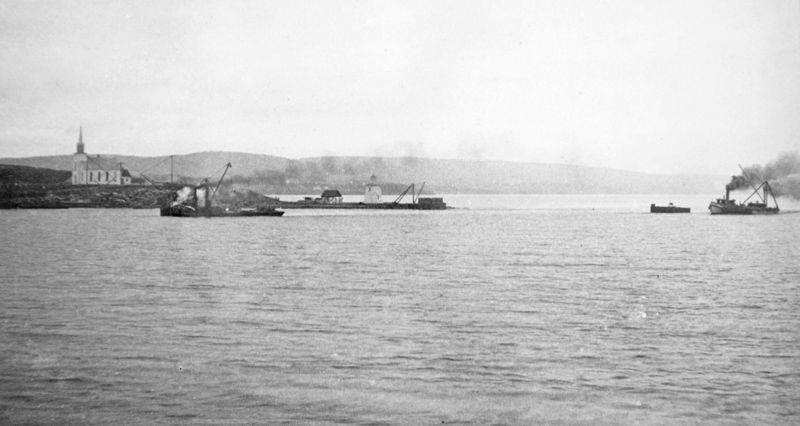 Bras dOr Lake, the great inland sea in the heart of Cape Breton Island, has many inlets and bays separated by peninsulas that jut long distances into the lake. Grand Narrows, also known as Barra Strait, runs between Iona Peninsula on the east and Washabuck Peninsula on the west and is considered the dividing point between the northern and southern basins of the lake.

In 1874, the Department of Marine had a lighthouse built on Uniacke Point on the western side of Barra Strait and published the following description of the tower:

The light is a fixed white, elevated 20 feet above high water, and visible about 10 miles. The tower is a square wooden building, painted white, 20 feet high. The lantern is of wood with iron floor, 6 feet in diameter, having eight sides, glazed with plate-glass 36 x 30, three panes being dark; one circular-burner lamp and 18-inch reflector, and four with 16-inch reflectors are used. 270 gallons oil were supplied, and three tanks. The keeper lives in his own house.

The building was erected by Mr. Wm. Tory, for the contract price of $795.

The light was put in operation on 18th September, 1874, and is for the purpose of guiding vessels through Barra Straits and assisting the navigation of the Little and Great Bras dOr lakes. Mr. Stephen McNeil was appointed keeper, at an annual salary of $120.

An oil store was built near the lighthouse in 1885, and in 1890, F.X. McNeil took charge of the light after Stephen McNeil, the first keeper, died.

The Intercolonial Railway of Canada built Grand Narrows Bridge, Nova Scotias longest railway bridge up to that time, in the late 1880s to connect Sydney with Port Hawkesbury. The bridge connects Uniacke Point with Kelly Point on the east and has a swing span to permit the passage of marine traffic through the strait. Ferry service across Grand Narrows continued until 1993 when Barra Strait Bridge, carrying Route 223, was completed parallel to the railroad bridge.

A few years after the Grand Narrows Bridge was completed in 1890, the Department of Marine decided to discontinue the light on Uniacke Point and replace it with one at Gillis Point, located roughly seven miles north of Uniacke Point. Keeper F.X. McNeil exhibited the light from Grand Narrows Lighthouse for his last time on December 31, 1894, and the next day he moved to Gillis Point and exhibited the light from the new tower there.

In 1901, the Department of Marine decided to reactivate the lighthouse on Uniacke Point, which was known as Iona Lighthouse at this time instead of Grand Narrows Lighthouse. A pole light was built on Uniacke Point in 1929, and the wooden lighthouse was demolished. The pole light consisted of a mast with a small white shed at its. A keeper was still responsible for the pole light and also had to use a hand-operated foghorn to answer signals from vessels. The foghorn was discontinued and the light was made unwatched in 1952.

For a larger map of Iona (Grand Narrows) Lighthouse, click the lighthouse in the above map.