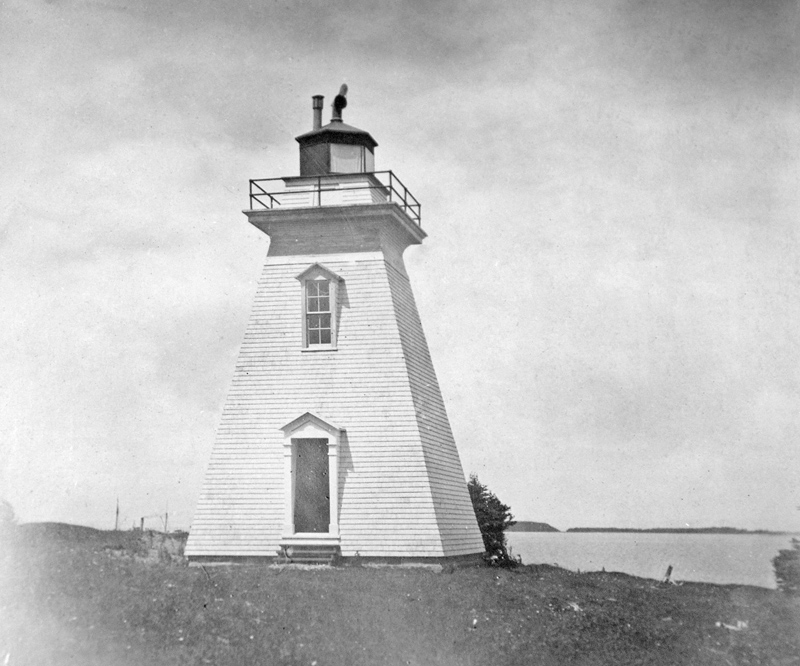 Red Islands are a group of four islands, two large and two small, located along the southeast shore of Bras dOr Lake, just north of the approach to St. Peter Inlet. Campbells Island and Evans Island, the two large islands, along with Sheep Island, form a horseshoe-shaped enclosure that provides a secure boat harbour but has a narrow entrance.

The village of Red Islands is located on Cape Breton, just southeast of the islands.

After the opening of St. Peters Canal, which connected Bras dOr Lake with St. Peters Bay and Lennox Passage, vessel traffic greatly increased on Bras dOr Lake. In 1895, the Department of Marine published the following information on a new lighthouse at Red Islands:

A lighthouse has also been erected on the west side of Campbells Cove, Red Island Settlement, on the southern shore of the Great Bras dOr Lake.

The building is a square tower, painted white, surmounted by an iron lantern painted red, and placed 50 feet back from the extremity of the point, and is 37 feet high from base to vane on lantern.

The illuminating apparatus is a dioptric of the seventh order, and the light, which is fixed red, is 47 feet above high-water mark, and visible at a distance of eight miles from all points of approach.

The light is principally intended for the guidance of vessels navigating the Great Bras dOr Lake, between East Bay and St. Peters Inlet, and to lead clear of the shoals extending southerly from the Red Islands. The light will be put in operation in November, 1895. The work of erection of the lighthouse was done by Mr. Johnstone, of Red Island Settlement, whose contract price was $885.00.

James J. Johnson was appointed the first keeper of the lighthouse at an annual salary of $120. Keeper Johnson served until 1899 and was followed by R.J. Campbell, who served two years, and then John P. Campbell.

Red Islands Lighthouse continued to show a fixed red light until it was discontinued in 1964.

For a larger map of Red Islands Lighthouse, click the lighthouse in the above map.