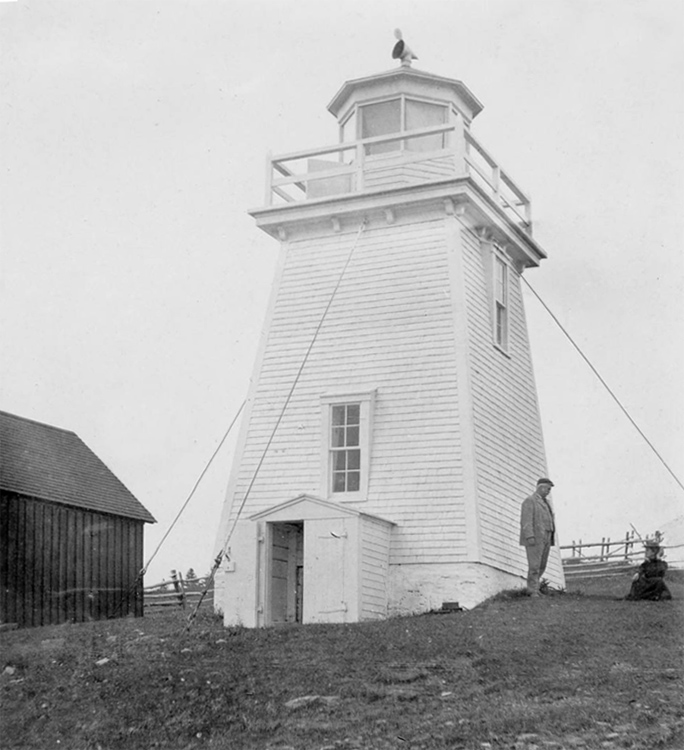 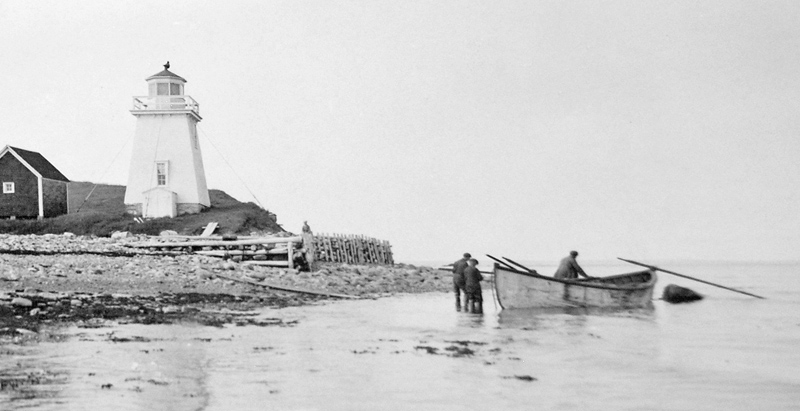 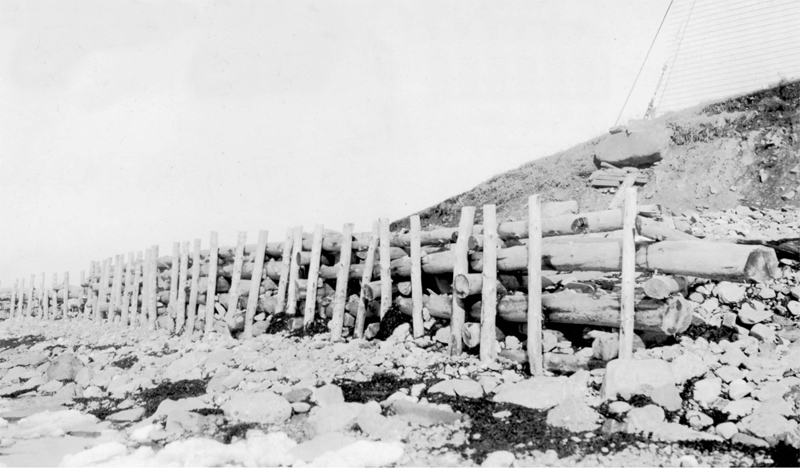 Crichton Island and the causeway that connects the island to Isle Madame help protect the harbour at West Arichat. In 1874, the Department of Marine had a lighthouse built on Crichton Head. An account of its construction and a description of the lighthouse is found in the departments annual report for that year:

This light was put in operation on the 25th of October, 1874, and has been erected on the north extremity of Creightons Head, West Arichat. This building when nearly completed was blown over during the August gale last year. It has now been rebuilt and firmly secured with wire stays. The tower is a square wooden building 20 feet high, painted white, with a cellar in which the oil is kept. The lantern is of wood, 6 feet in diameter, with iron floor and zinc linings. It has eight sides, two of which looking inshore are dark, and glazed with plate glass 36x28. The light, which is a white revolving, shewing a flash every forty seconds, is produced by six A lamps with 12-inch reflectors arranged in two faces, three lamps on each. Two hundred and ninety gallons of oil were delivered and three tanks supplied. The keeper resides in his own house. The light is for the purpose of guiding vessels into Little or West Arichat.

An allowance of S400 was made to the contractor for reconstructing the building, and placing the wire stays.

Mr. Henry H. Creighton was appointed keeper, at an annual salary of $200.

The terrific gale of August 24, 1873 that toppled the lighthouse was a hurricane that destroyed 900 buildings and 1,200 boats in Nova Scotia, and killed at least 223, the majority of whom were sailors lost at sea.

Protecting the shoreline near the lighthouse was necessary from the beginning. In 1877, Keeper Crichton was allowed to spend a small sum to place an additional tier of binders, stringers, and ballasting in the crib protection in front of the lighthouse. Messrs. D. Cameron and J. McIsaac of Arichat were paid $320 in 1879 to improve the protective work. This wooden breakwater would receive regular attention through the years.

In 1915, a fourth-order Fresnel lens was installed in the lantern room, and the characteristic of the light was changed from a white flash every forty seconds to a ten-second white light followed by a five-second eclipse.

Keeper Crichton kept the light for forty-seven years. His service only came to an end with his death in 1921 at the age of eighty-four. Clement Cutler helped with the light at the end of Crichtons service and looked after it until R.C. Poirier was made keeper in 1922.

Keeper Crichtons wife Elizabeth was the daughter of George McKay, keeper of North Canso Lighthouse. Henry and Elizabeth were married on October 12, 1864 at North Canso Lighthouse, and ten years later, Henry would take up the profession of his father-in-law. Henry and Elizabeth had six children, the last of whom was a daughter named Florence who was born after Henry became keeper of Crichton Head Lighthouse. Clement Cutler, who helped Keeper Crichton with the lighthouse during the final year of his service, was Crichtons son-in-law, having married his daughter Florence.

In 1924, Keeper Poirier was given a hand-operated foghorn that he was required to sound in response to signals from vessels in the vicinity during periods of limited visibility. The original lighthouse remained standing through at least the 1950s.

In more recent years, a skeletal tower with a red enclosed lower portion was used to produce a fixed green light on Crichton Head. This tower was used through 2012. In 2020, buoys were being used to mark Crichton Head.

For a larger map of Crichton Head Lighthouse, click the lighthouse in the above map.