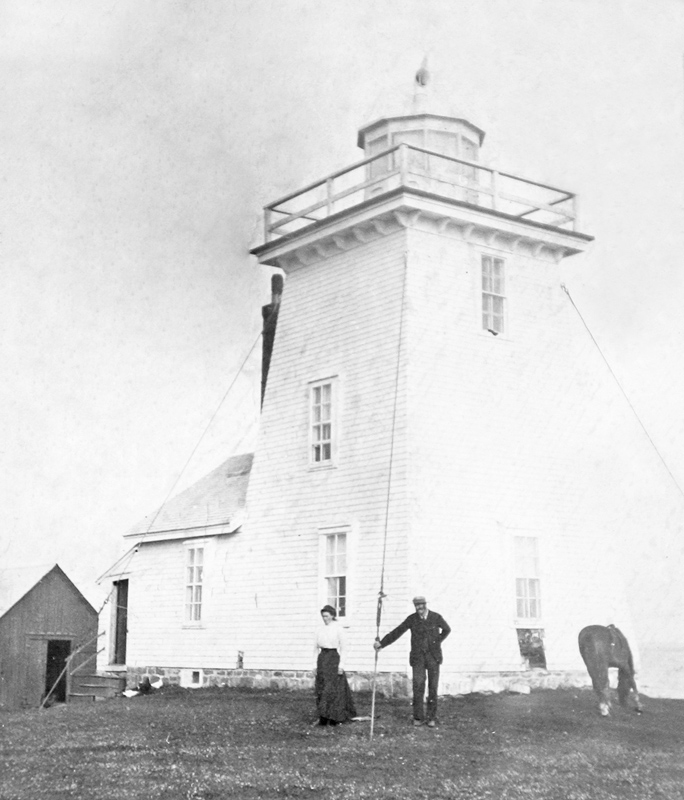 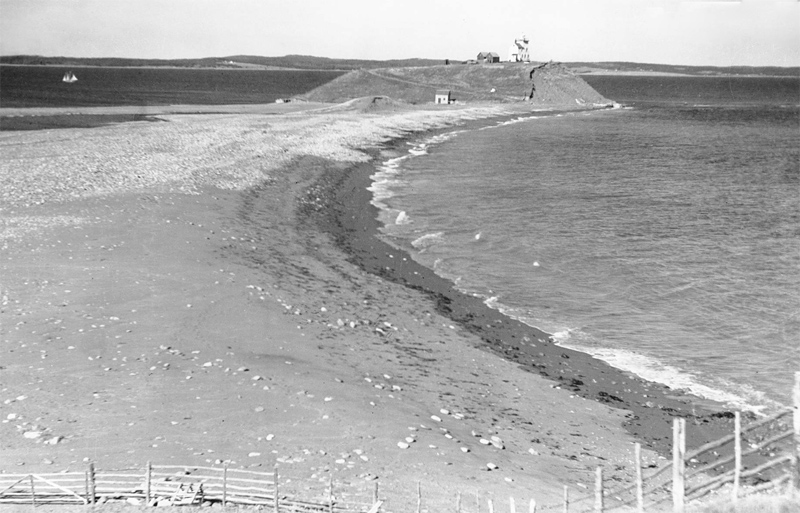 Isle Madame lies off the southwest coast of Cape Breton Island, with Lennox Passage running between the two islands. Canso Strait lies off the western end of Lennox Passage, while the eastern end connects to St. Peters Bay, which has been linked to Bras dOr Lake via a canal since 1869.

Cape La Ronde (also known as Cap La Ronde, Cape Ronde, Cap Ronde, Cape Rond, and Cap Rond) is the easternmost point of Isle Madame and a natural place for a lighthouse to guide mariners into and out of St. Peters Bay. In its 1874 Annual Report, the Department of Marine reported on the completion of Cape La Ronde Lighthouse:

This light-house has been erected during the present year on Cape La Ronde, on the west side of the entrance to St. Peters Bay, Richmond County, Cape Breton, for the purpose of guiding vessels into the Bay. It is a fixed white light elevated 92 feet above high water, and in clear weather can probably be seen a distance of 14 miles.

The tower is a square wooden building, painted white, 28 feet high, surmounted by an iron lantern 7 ½ feet in diameter, with ten sides, and glazed with plate glass 36 x 28 inches; one pane is dark.

The light is exhibited by means of two-circular burner lamps with 20-inch reflectors; one mammoth flat-wick with 16-inch reflector, and three with 18-inch reflectors. There are two spare lamps on hand, and three galvanized iron tanks have been provided. 276 gallons of oil were delivered at this station.

The dwelling is attached to the light-house, besides which there is an oil store 12 x 16 feet. The contract was awarded to Mr. F. S. Cunningham for the sum of $1,345.

Mr. Charles Lattimore was placed in temporary charge of the light, which was shewn on the 1st December, 1874.

The appointment of Charles Lattimore (Latimer) at an annual salary of $300 was made official in March 1875, and he would go on to serve until 1898. Each of the lights first three keepers had lengthy careers at the station. John Mauger followed Charles Latimer in 1898, and served until 1928, when Edward Poirier was appointed keeper.

In 1878, a twelve-foot-deep well was dug at the station and walled with stone. In 1881, wire stays were attached to the tower as it was found to vibrate considerably in strong winds due to its exposed position on the cape.

On December 1, 1902, the fixed white light, which had been the stations characteristic since it was established, was changed to flashing white through the installation of a fifth-order lens from Chance Brothers of England. The revolving lens produced a white flash every seven-and-a-half seconds.

The original lighthouse remained standing until around 1950, when a tower on a shed was placed on the cape. The lighthouse was unstaffed in 1966. In 2020, a lighted buoy was being used to mark Cape La Ronde.

For a larger map of Cape La Ronde Lighthouse, click the lighthouse in the above map.